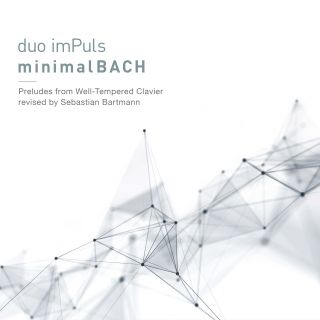 Catalog number: ZZ 76130
Releasedate: 08-02-19
- Bach’s WTC First Book Preludes re-contextualized via a “minimal music” approach
- The revision by the composer Sebastian Bartmann aims to enhance the simplicity and beauty of the Preludes
- The two-piano Duo imPuls is characterized by

The new project "minimalBACH" by piano duo "duo imPuls" is dedicated to the Preludes by Johann Sebastian Bach from the first volume of the Well-Tempered Clavier, which are placed in the new, exciting listening context of minimal music". The aim of composer and pianist Sebastian Bartmann is to use "minimalBACH" to focus on the musical essence and effects of the individual Preludes by J.S. Bach, to extract their radiance and to shed new light on them with the techniques of minimal music.

Passionate piano playing in intense brilliance- full of depth and strength, full of devotion and emotion -for this stand the pianists Barbara and Sebastian Bartmann of "duo imPuls".

The piano duo, which has received many international awards, captivates and

inspires worldwide audiences with its unmistakable character. Inspired and inspired by the 88 piano keys, the artists embody the perfection of intimate interaction in a new dimension and at the highest level. Perfectly harmonious and deeply connected, they conjure up fascinating soundscapes on the stages of the world.

The rousing pianist duo stands for their very own multifaceted handwriting: the subtle artists are open-minded and curious and like to break new ground, far away from the beaten track. They also consciously cross boundaries, because their credo is to perform something original and deeply personal. And the effect is overwhelming: unique interpretations in unmistakable timbres, presented in technical and stylistic brilliance, characterise the style of the likeable artist couple.

In addition to the classical-romantic literature, the diverse repertoire of "duo imPuls" also includes his own works. Sebastian Bartmann's award-winning compositions have been performed in many European countries as well as in the USA. As a versatile composer, he is reluctant to commit himself to one style, and thus multifaceted compositions for various formats in the fields of media, film and drama as well as instrumentations for the concert are created. In addition to highly acclaimed piano duo works, he has also written orchestral works, most recently the "symphony of perfect taste" for the Brandenburgisches Staatsorchester Frankfurt/Oder, as well as "second hands - ein musikalisches Ausbruchsmärchen" for the 2nd violins of the Munich Philharmonic or "Last Letters - p.s. voices before and beyond" for the Blenheim Singers in Oxford, based on the death sentences of British personalities from history.Furthermore, the duo imPuls stands for extraordinary concert formats and concepts