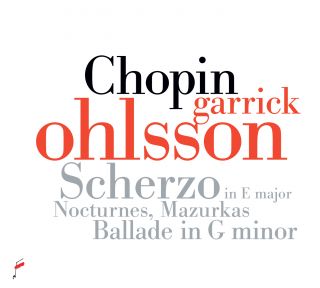 Catalog number: NIFCCD 219
Releasedate: 14-06-19
- Well-known pianist Garrick Ohlsson records a selection of works by Chopin, playing on a contemporary piano
- The same program is recorded by him on a historical Erard piano on NIFCCD 049
- This allows to compare the sound, the phrasing, the accents and the timbre by the same pianist playing the same works on two historically different instruments

Garrick Ohlsson – winner of the 1970 Chopin Competition, one of the greatest Chopin specialists of our time, honored during the 2018 August Chopin and His Europe festival with the Gloria Artis Gold Medal – has recorded two Chopin recitals for The Fryderyk Chopin Institute: one on modern piano, the other on period piano. The same program in two different sound versions.

This is now The Fryderyk Chopin Institute’s fourth such double album – after the recordings of Dang Thai Son (Nocturnes), Wojciech Świtała (Ballades) and Krzysztof Jabłoński (Etudes); these CDs are of extraordinary knowledge-building value, permitting sensitive listeners to acquaint themselves with the particular beauty of early instruments in confrontation with their modern version. Garrick Ohlsson’s newest recordings acquaint us more closely with Chopin in two different ways, in both cases with the greatest of expertise in his music.

For this recording, Garrick Ohlsson selected genres characteristic of Chopin: a ballade, nocturnes, a scherzo, mazurkas. The artist played this recital on a Steinway piano.

For a long time, he was regarded above all as one of the leading interpreters of the music of Chopin, but his repertoire covers virtually the whole piano literature (more than eighty concertos, from Haydn and Mozart to the twenty- first century, including many works composed specially for him). He has recently performed in Liverpool and Madrid, toured the US with the St Petersburg Philharmonic Orchestra (cond. Yuri Temirkanov) and given a series of recitals in Los Angeles, New York, New Orleans, Prague and Hawaii. As a keen chamber musician, he has worked with the Takacs, Emerson, Cleveland and Tokyo quartets. He is co-founder of the FOG Trio (with cellist Michael Grebanier and violinist Jorja Fleezanis); he has also performed with such outstanding artists as Magda Olivero, Jessye Norman and Ewa PodleE. He has made many recordings for such labels as Arabesque, RCA Victor Red Seal, Angel, BMG, Delos, Hanssler, Nonesuch, Telarc, Hyperion and Virgin Classic. He gained critical acclaim for his 10-disc album with the complete Beethoven sonatas (Bridge Records), one of which won a Grammy (2008). He has also recorded Scriabin’s, Smetana’s Czech Dances, etudes by Debussy, Bartók and Prokofiev (Hyperion), Close Connections, featuring contemporary works, a double album of sonatas by Liszt and Scriabin (Bridge Records) and recently solo music by Manuel de Falla.

He also appears in the documentary film The Art of Chopin (2010), produced for the Chopin Year celebrations. In 2015, Garrick Ohlsson was a juror of the 17th Chopin Competition in Warsaw. In 2018, Garrick Ohlsson was honoured by the Polish Ministry of Culture and National Heritage with the ‘Gloria Artis’ gold medal for propagating Polish music around the world.