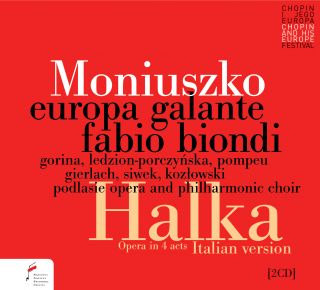 Catalog number: NIFCCD 082
Releasedate: 05-04-19
- A real event in the world of opera: Polish favorite and most fortunate opera, Halka, by Stanislaw Moniuszko in a production by Chopin Institute.
- Composed in 1847, but staged for the first time in 1857, Halka is one of the finest operatic works in European Romantisicm
- This is the world premiere recording that uses a period instrument orchestra (the famous Europa Galante).
- The conductor is one of our time leading conductors for period performances: Fabio Biondi
- Biondi himself is excited about the composer and his opera: “Moniuszko is a composer to whom one cannot but refer with great enthusiasm”
- The opera is sung in the Italian language version.

The passion that engulfed me for the music of the great Stanis∏aw Moniuszko was not by chance. In the Europe of the first half of the nineteenth century, filled with the operatic element, under the powerful sway of the phenomenon of Giuseppe Verdi, we are enchanted by the language which the great Polish master succeeded in personalising in such an exceptional, distinctive way. In his scores, we find wonderful lyricism and splendid instrumentation, referring with deference to the great German symphonists, and at the same time to Italian simplicity. Above all, however, we discover the wonderfully mined potential of popular Polish music of those times. This all means that Moniuszko is a composer to whom one cannot but refer with great enthusiasm, if one wishes to better understand the phenomenon of nineteenth-century European music.

Europa Galante was founded in 1990 by its current musical director, Fabio Biondi, whose aim was to create an Italian ensemble performing Baroque and Classical repertoire on period instruments. The artists perform in a changing line-up, focussing primarily on chamber music. The repertoire also includes operas by Handel (incl. Agrippina and Imeneo) and Vivaldi (incl. Ercole sul Termodonte and Oracolo in Messenia), as well as large instrumental works.
The ensemble is renowned for its performances of works by Alessandro Scarlatti: oratorios (Maddalena, La Santissima Trinit∫), serenatas (Clori, Dorino e Amore) and operas (incl. Massimo Puppieno, Il Trionfo dell’Onore, La Principessa Fedele and Carlo Re d’Allemagna). Europa Galante works regularly with the Fondazione Santa Cecilia in Rome on restoring to musical life eighteenth-century Italian operas, such as Caldara’s La Passione di Gesù Cristo, Leo’s Sant’Elena al Calvario and Mayo’s Gesù sotto il peso della Croce. The ensemble has appeared in the world’s greatest concert halls, performing in Australia, Europe, South America, Canada, Israel, Japan and the US. Since the release of its first disc of Vivaldi concertos, Europa Galante has received multiple awards for its recordings of works by that composer, including two Grammy nominations (Concerti con molti strumenti, 2004; Bajazet, 2006) and a Diapason d’Or (I Concerti dell’Addio). The 2018/19 season will include performances in Germany, France, Italy, Spain and Poland. As part of a Monteverdi project, Europa Galante will also be touring Europe with Ian Bostridge and performing in Hamburg in a semi-staged version of the opera Il Ritorno d’Ulisse in Patria. Among the sensational events in which the ensemble has participated was a concert performance of Bellini’s Norma in 2010 at ‘Chopin and his Europe’, which was the first presentation of this opera, beloved of Chopin, on period instruments in Poland.