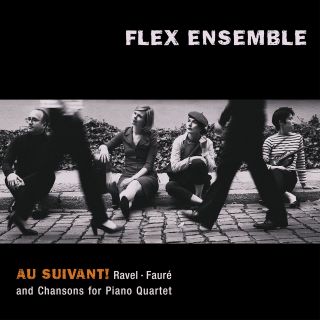 Catalog number: AVI 8553161
Releasedate: 08-03-19
- Four nationalities are the hardcore crew of the FLEX ENSEMBLE who are very much in favour of French music.
- Two well known pieces by Fauré and Ravel (in an arrangements for Piano Quartet) are forming the brackets on the very special PROJECT CHANSON
- Five young European composers are being asked to quarrel with the format of the CHANSON, from as early as the middle age til the latest of Jacques Brel.

“Our second album (En suivant! = Next!) highlights three different genres of French music: A youthful work by Fauré, written in the late romantic piano quartet tradition, character pieces by Ravel in a new arrangement for piano quartet and an eclectic mix of contemporary interpretations of French Chansons from Claude Le Jeune up to Georges Brassens.
It all began with Fauré… his C minor Piano Quartet is one of the earliest works that we learned as an ensemble. We immediately formed a personal connection to the quartet, perhaps one of Fauré's most popular chamber music works. With its emotional core, instrumental colour, flowing but clear form, and the fascinating story behind its creation, we embraced the challenge of exploring our sound and furthering our comprehension of French musical literature.

Some years later we received an unexpected gift: The first movement of Ravel's Ma Mère l´Oye arranged for piano quartet by our friend Shintaro Sakabe. “Try it,” he said, “I think it might work”. ………..
But the idea that brought everything together for this recording was Project Chanson……….
(Excerpt from the Booklet Notes of the ensemble)

Known for their musically refined and highly energetic performances, the Flex Ensemble has been thrilling audiences with programs ranging from classical and romantic piano quartet repertoire to modern presentations featuring work by today’s preeminent composers like Márton Illés and Gérard
Pesson. They regularly collaborate with prominent artists such as Wolfgang Güttler, Oliver Wille or Albrecht Mayer. The group founded the annual Chamber Music Fest Rheinhessen in 2014 as well as the imPULS concert series in Hannover in 2016, and they continue to serve as artistic directors
for both.

The Flex Ensemble was awarded 1st prize and the special prize for interpretation at the International Schumann Chamber Music Award in Frankfurt in 2013. They were also winners of the Gianni Bergamo Classic Music Award 2015 in Lugano and the recipient of awards at the Kiejstut Bacewicz International Chamber Music Competition in Łód´z and the Premio Trio di Trieste.

The Flex Ensemble has appeared at venues such as the Concertgebouw Amsterdam, the Alte Oper Frankfurt, the Beijing Performing Arts Center and Festivals such as the the Sommerliche Musiktage Hitzacker and the Heidelberger Frühling. Their performances have been broadcast live on German
Radio (SWR and NDR Kultur) and Dutch Radio (Radio 4). In 2014 their Debut CD The Arrival of Night was released from GENUIN Classics.

The pictures on this CD are made by Zuzanna Specjal. They are inspired by the black and white street photography of Robert Doisneau. On our website www.flexensemble.com you can find the biographies of the composers and their own words about their Chansons.