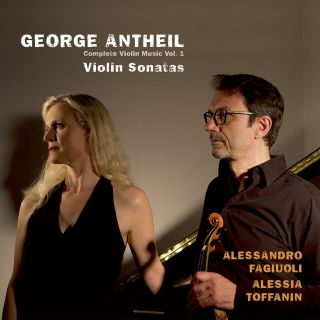 - George Antheil – the “bad boy of music” he was called – shaped the first half of the 20th centuary in participating different styles of music
- Contemporary of Maurice Ravel, the late Claude Debussy, the wild 1920th and 1930th years in Paris – he made himself quite famous for a lot of unusual action, wrote film music ad – as his second (parallel) world he wrote neo-romantic music, searching for his American roots
- His four Violin Sonatas exemplify the two periods of creativity – Dadaist-cubist and neo-romantic.

“A double life. Like his friend and colleague Miklós Rózsa, George Antheil (1900-1959) had a double life.

Not only because he – like Rózsa – scored dozen of films and at the same time strove to be recognized as a “classical” composer, but also because he led two different existences, before and after WWII

. In the twenties, Antheil was trying to establish his reputation as the torchbearer of the avant-garde: he lived mostly in Europe, scandalizing the public with his iconoclastic music and furiously percussive piano playing. His most famous compositions—the piano sonatas Airplane, Sauvage and Death of the Machines, his violin sonatas and the Ballet mécanique scored for 16 player-pianos, xylophones, and percussion—all evidence a futuristic aesthetic theory, influenced mostly by Bartók, Ornstein and Stravinsky. However, in a dramatic turn following a profound personal and artistic crisis, Antheil re-emerged, now in his early forties, as a neo-romantic, fully-integrated American composer, even, to some extent, a conservative.

The four sonatas in this first volume of his violin music exemplify the two periods of his creativity. They document Antheil's musical evolution from the percussive First, to the Dadaist-cubist Second and the more neoclassical Third. A hiatus of 25 years separate these early scores from the so-called Second Violin Sonata (i.e. his Fourth Sonata), composed in 1947-48, which is clearly a more classically structured composition. While the three pieces composed between 1923 and 1924 (the Third) emerged from a pervasive influence of Stravinsky's early masterpieces, the Fourth Sonata is more under the spell of Prokofiev and Shostakovich.

To Antheil, the Russians served, paradoxically, as models for a possible American music, mostly because they did not give up tonality, they knew too well how to handle (and hide) folkloric material and they could at the same time counterbalance what Antheil considered the pernicious influence of Schoenberg's twelve-tone.

……“ (Excerpt of the Booklet Notes by Mauro Piccinini)

Alessia Toffanin holds degrees in piano, chamber music and vocal chamber music, from the Venice,
Padua and Rovigo conservatories. She was awarded prizes and mentions as soloist and in piano duo in
many competitions, among them the “Città di Albenga”, “Città di Bardolino”, Città di Stresa” “K. Czerny”
and “Roma ‘90”. Her passion and interest for twentieth-century and avantgarde music led Toffanin
to collaborate with the Padua-based Interensemble group, giving concerts in many prestigious festivals,
such as “Les Musiques” (Marseille), “Ensems” (Valencia), as well as at the Auditorium National of
Madrid, the Dublin National Concert Hall, the Royal Festival Hall in London, the M.I.T., Harvard University
(Boston) and at New York University.
At the Université Evry (Paris), under the guidance of Jean-Pierre Armengaud, she deepened her
knowledge of the musical repertoire of Paris at the turn of the century.
A dancer herself, she worked as a pianist with many étoiles: Luciana Savignano, Toni Candeloro,
Marco Pierin, Rosario Suarez.
As a member of the Interensemble, she recorded with Cramps, Rivoalto, and Taukay labels. In duo
with violinist Alessandro Fagiuoli, for the CD label Blue Serge, she recorded works by Ravel, Debussy,
Satie, Milhaud, Stravinsky, Messiaen, Amendola. She plays with the Venice La Fenice orchestra,
works as music assistant at La Biennale di Venezia for the “Biennale Musica College”. She is also
teacher of piano accompaniment at the Benedetto Marcello Conservatory in Venice.

Violinist Alessandro Fagiuoli‘s artistic journey has always been marked by passion for innovation
and curiosity about unusual styles and repertoires. He studied at the Benedetto Marcello Conservatory
in Venice, later specialising with Enzo Porta in twentieth-century violin repertoire. After a scholarship
obtained from “La Biennale di Venezia” on the subject of “Late Nono performance practices”, he further
investigated modern and contemporary music, working with some of the most important Italian
contemporary music ensembles, as well as founding in Venice the Paul Klee String Quartet.
As a soloist and as first violin of the quartet, he performed in many important international festivals and
concert seasons; he went on tours in all of Europe, in the States, in Russia, China, giving numerous
world premieres.
Thanks to the close collaboration with French pianist Jean-Pierre Armengaud, Fagiuoli had the
chance to deepen his knowledge of the French violin and piano repertoire. With Armengaud he
also issued the world premiere recording of Louis Aubert‘s huge Violin Sonata (1926). In duo with
Alessia Toffanin he recorded for many European labels. Of particular interest also the release of the
complete Philip Glass string quartets.
He held workshops and master classes in Italy, France and China. Since 2014 Fagiuoli gives a
master class on contemporary string quartet repertoire at the Benedetto Marcello Conservatory in
Venice, as well as violin and string quartet workshops at the “Ischia Musica” courses.