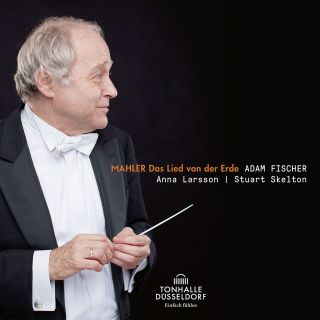 - Anna Larsson counts as one the top best Mezzo sopranos ideal for Mahler, the Tenor Stuart Skelton may have currently the most able and outstanding voice for the extremely demanding part.

(from the preword of the booklet)

Das Lied von der Erde is shot through with a special atmosphere: a mood of farewell – mostly, of course, in the last movement, Der Abschied. When attempting to construct that last movement, every conductor and every orchestra are faced with a challenge that is as complicated as it is thrilling. In my view, the last movement of Das Lied von der Erde is the most difficult one to conduct in the entire repertoire. Mahler even abandoned the sensation of regular metre. He had stated elsewhere that one should not conduct the metre but the rhythm, but here things are different. Toward the end of the last movement, the 3/4 bars seem to lose contact with the ground and start to float in midair; hardly any points of reference are left for the musicians to remain together. This truly is life in the process of dissolving. When we grow old and sick, we are alone, and things start slowly grinding to a halt. I cannot disassociate this farewell from the last movement of Mahler’s Ninth Symphony. Although the slow dissolving of life is even more apparent there, the tendency is already clear in Das Lied von der Erde – a continuous line can be drawn from here to the last page of the Ninth.

From the onset, the music in Das Lied von der Erde is permeated by a special mood. Even the texts, based on Far Eastern poetry, are more mood than content. Mahler repeatedly abandons the words’ meaning, but the mood remains. The music implies so much more than the words! For instance, the third poem evokes the reflection of a mirror image in water, but I don’t see those images anywhere in the music. Mahler is not concerned with helping us understand every syllable. If the voice, in its anguish, is drowned out by the orchestra, that is what the music is trying to achieve. Throughout a great number of passages, “beautiful tone” is not what is important. To the contrary. In Das Lied von der Erde, the singers are likewise required to declaim, cry, and shriek. I think that even those concertgoers who have no command of the German language have no problem in gaining a quite precise grasp of what is going on…

Anna Larsson obtained her music diploma at the University College of Opera in Stockholm, her
home town. In 1992 she met the British breathing and vocal coach Anna Sims, with whom she continues
to work until today. Anna Larsson sang her opera début in 1996 in Carl Unander-Scharin‘s Tokfursten/
The King of Fools at Vadstena Castle. She went on to draw major international attention in her
performance of Mahler’s Resurrection Symphony (No. 2) with the Berlin Philharmonic and Claudio
Abbado in 1997. With her rich, velvety, flowing voice, Anna Larson has made herself a worldwide
reputation in the role of Erda in Wagner’s Ring cycle, with performances in the opera houses of
Berlin, Vienna, Salzburg, Aix-en-Provence, and Milan. She has also covered the roles of Waltraute,
Orphée, Fricka, Dalilah and Zia Principessa in venues such as Stockholm Royal Opera, Bavarian
State Opera (Munich), the Palau des Arts (Valencia), and Finnish National Opera, along with the
festivals in Salzburg and Aix-en-Provence, collaborating with conductors including Daniel Barenboim,
Zubin Mehta, Christoph von Dohnányi, and Kent Nagano. In January 2011 she sang her début as
Kundry (Parsifal) at the Théâtre de La Monnaie in Brussels.
As a concert vocalist she has collaborated with some of the world’s greatest orchestras, including
the Berlin, Vienna, New York and Los Angeles Philharmonics, the Chicago Symphony, the LSO,
and the LPO. Anna Larson masters practically all the classical repertoire for contralto and orchestra,
and has especially made herself a name as an interpreter of Mahler. She also loves to sing Lieder,
going regularly tour with internationally renowned pianists in vocal programmes featuring a wide
range of German, British and Scandinavian art song repertoire.
In 2010, King Carl XVI Gustaf of Sweden conferred Anna Larsson the title of Royal Court Singer.
In 2011, she inaugurated her own concert hall: the Vattnäs Concert Barn in the village of Vattnäs
near Mora in the Swedish province of Dalarna.  www.annalarsson.nu

STUART SKELTON, Tenor
Born in Sydney in 1968, Stuart Skelton is one of the finest heldentenors on the stage today. He was
the first Australian to win the renowned Hans Gabor Belvedere Singing Competition in Vienna.
Stuart was trained as an opera singer in Sydney, as well as the University of Cincinnati Conservatory
of Music in the classes of Barbara Honn and Thomas Baresel. As an Adler Fellowship member,
Stuart Skelton began his international singing career in San Francisco. The multiple prizewinner
now makes guest appearances on the most renowned opera and concert hall stages worldwide: at
the New York Metropolitan Opera, English National Opera, Opéra National de Paris, Opernhaus
Zürich, Dresden Semperoper, Deutsche Oper Berlin, and the State Operas of Vienna, Munich,
Hamburg, and Berlin.
Apart from the great Wagnerian Heldentenor roles (Lohengrin, Parsifal, Erik, Siegmund, and Rienzi),
Skelton’s repertoire comprises many further demanding opera parts, including Beethoven’s Florestan,
Saint-Saëns’s Samson, Dvořák’s Dimitrij, Strauss’s Kaiser und Britten’s Peter Grimes. He continues to
be in demand on concert stages around the world, collaborating with conductors of the likes of Daniel
Harding, James Levine, Lorin Maazel, Simone Young, Michael Tilson Thomas and Daniel Barenboim.
Stuart Skelton’s extensive discography includes Janáček’s Glagolitic Mass and Schoenberg’s Gurrelieder
(Edward Gardner / Bergen Philharmonic Orchestra), Elgar’s Dream of Gerontius (Sir Andrew
Davis / BBC Symphony Orchestra), und Mahler’s Das Lied von der Erde (Michael Tilson Thomas /
San Francisco Symphony). He is also participating in three separate complete recordings of Wagner’s
Ring cycle: with the Hamburg Philharmonic conducted by Simone Young, with Seattle Opera, and
with the State Opera of South Australia under the baton of Asher Fisch.
The 2014 International Opera Awards named him Male Singer of the Year; furthermore, Skelton has
been twice honoured with the Sir Robert Helpmann Award: once for his performance of Siegmund
in the State Opera of South Australia’s 2004 production of the Ring Cycle, and again in 2010 for
Best Male Performer in a Lead Role for his portrayal of Peter Grimes for Opera Australia.