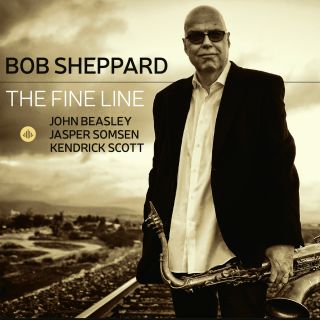 How this project came to fruition
At the Jazzahead Network Event 2013 in Bremen, Germany, I met Michele Ito from BFM Records, who in turn introduced me to Bob Sheppard. Shep and I had a wonderful, long conversation. We exchanged music, our albums and discussed possibilities of playing together. While driving back home to The Netherlands, I listened to Bob’s album Close Your Eyes. I fell in love with the music and his playing. Determined to reunite onstage, I tried to organize several projects, but due to very busy schedules our plans couldn't come together. In the end, it took us almost two years to be on stage playing in The Netherlands for a full week of concerts, masterclasses and live radio. We had an amazing time and became real friends. In 2016, Bob returned for another week of concerts and studio recordings. Shortly after, the former General Director of Challenge Records, Anne de Jong, offered me the opportunity to work on a number of audio productions as an independent producer. One of those projects became this very anticipated album. Bob decided to call John Beasley and Kendrick Scott and I flew to LA to record with them. As I was getting ready for the trip, I asked John Clayton, my former teacher and friend, where I could rent a great instrument. John kindly offered me his famous Ray Brown double bass, the one Ray used in the 1960s during his time with the Oscar Peterson Trio.

I believe “The Fine Line” is a beautiful statement that displays the great music and musicianship of Bob Sheppard and that of all the players involved. It demonstrates that if you strongly believe in the life of an idea, desire will find a way to turn it into a plan and in the end your dream can come true.
– Jasper Somsen

Some musicians’ careers are easily pigeonholed. Not so Bob Sheppard’s. For more than four decades, the multi-instrumentalist has played on countless sessions with an astounding crop of A-list jazz giants—among them Chick Corea, Freddie Hubbard, Michael and Randy Brecker, Mike Stern, Herbie Hancock, Kurt Elling, Dianne Reeves, Lyle Mays, John Beasley and Steps Ahead—and artists within several other genres. He’s also recorded and toured as a leader, contributed to hundreds of movie and TV soundtracks, served as an educator and more.

But what’s most astounding, perhaps, is that Bob Sheppard still has so much more he wants to do. “My career path was a product of taking intertwining roads, never really knowing where they would lead,” he says. “I continue to stay excited about future projects; the notion of slowing down does not appeal to me in the least.”

He’s been at it since he was a child. Music entered Sheppard’s life via his amateur saxophonist father and was nurtured via a culturally aware high school that brought in big band legends like Woody Herman, Buddy Rich and Stan Kenton for the enrichment of the students. Although he originally wanted to play the drums, by the fifth grade sax and woodwinds became Sheppard’s calling. He got his first alto saxophone in junior high school. “Practicing became my friend, a place to escape,” he says.

From the start, it was jazz that lured him. “When I was a kid, there was jazz all over TV and radio. The sound of jazz and swing music was still in large part the norm on the radio and TV. I really didn’t need to search jazz out; it was all around me. I really liked the idea of finding melodies and the freedom of exploring sounds on my horn. I was constantly noodling and experimenting. I never waited for my teacher to tell me what to practice. Playing along with all of the music I heard was a huge factor in how I learned to use my ear, identify harmony and develop acute relative pitch, and to play in tune.”

Sheppard began playing professionally while still living in the Philadelphia area, where he grew up. He continued while attending college, working various stage shows and even the circus, and soon found gigs accompanying giants of the business such as Tony Bennett, Sammy Davis Jr. and the 5th Dimension. A steady spot in the orchestra of Chuck Mangione provided vital learning experience.

As his reputation grew, Sheppard made the all-important decision to relocate to Los Angeles. The move paid off immediately when he went to work with trumpet legend Freddie Hubbard. The gig lasted several years. “Playing on the same stage as Freddie was a breathtaking and frightening experience,” Sheppard says. “Much like jazz survival training, it exposed everything good and bad about my playing and inspired me to work harder. How lucky I was to get that close to his talent.”

With a solid list of credentials building up, and his ability to play numerous instruments—he is virtuosic on all varieties of sax, flute and clarinet—Sheppard became a first-call musician, a valued sideman who could be counted upon to bring fresh ideas to any recording session or live gig. Along the way, his own horizons expanded. “I learned to function in so many environments,” he says. “Learning how to react and relate stylistically, to become a musical mind reader and deliver what’s needed is still fun for me. Certainly it’s a skill that only comes from the experience and the array of gigs I’ve done along the way. The cumulative effect of experience is a priceless education.”

Those gigs included work not just with the top jazz artists cited above, but also stars of the pop, rock and R&B worlds, among them Joni Mitchell, Steely Dan, James Taylor, Stevie Wonder, Queen Latifah, Elvis Costello, Natalie Cole, Randy Newman, Rickie Lee Jones, Boz Scaggs and many others. He also put in time playing in the TV bands of legendary hosts like Johnny Carson and Joan Rivers.

“Playing with the best of the best is huge; it makes me play better. I was able to get those calls mostly due to my improvisational and interpretive abilities, and of course my sound,” says Sheppard. “All those top 40 and funk bands in the ’70s were very much jazz gigs to me; they taught me styles, how to hear my way through music, how to play in horn sections with singers. The pop tunes of the ’70s and ’80s had great harmonies and forms that left much room for individuality and expression. Offers to play with artists don’t come by accident but from an accumulation of life experience, references and developing a reputation over time.”

By the early ’90s, it was time for Sheppard to step out front. In 1991, he recorded his first album as a leader, Tell Tale Signs, for the Windham Hill Jazz label. Since then he’s released several other solo projects, most recently Close Your Eyes and From The Hip, both for BFM Jazz. He remains involved with other leaders, however, and has spent significant time, in particular, working with pianist Billy Childs’ ensembles and drummer Peter Erskine’s trio. “All of these amazing players are friends that I love and have played with a lot over many years, and I also love being a part of a community of mutually respected professionals,” he says. “The musical connections are deep and comfortable. When I lead my own band, I know that all my musical history has contributed and helped me communicate something that’s my own.”

One of Sheppard’s most rewarding ongoing involvements has been his work as an educator. For more than a decade he’s been a part-time faculty member at the USC Thornton School of Music and frequently conducts clinics at colleges. Still, he is pragmatic about the role that jazz education plays in the development of a musician. “Those days of a student playing tons of gigs are gone, so the only way for a young jazzer to find inspiration and camaraderie is through a college program,” Sheppard says. “I love the fact that there are institutions that offer this, and one of the great benefits of college is the many ensemble opportunities. But ultimately the language of jazz was never passed down and learned by courses,” he says. “We all learn differently and have different strengths and weaknesses. When I teach, I try to concentrate on how to develop a fun, personal and efficient way to practice that will continue for the decades to come. I enjoy the process of teaching someone how to teach themselves, how to develop a routine that motivates, attacks problems and simulates how we all learned before the advent of pedagogy and curriculum.”

Now, says Sheppard, he is fortunate to be in the position of being able to choose how he spends his time—a luxury he’s earned after decades of paying his dues. But, he says, he still hungers for the experiences his craft affords him. “I’m enjoying what I’m doing: the touring, playing with artists that rely upon my creativity and working in the industry,” he says. “I certainly want to do more recording and performing my own music as a leader. I’m planning a new CD and expanding my clinic schedule in addition to developing my teaching concepts on the web. My goal is to bring my ideas to the many interested musicians who are inspired to learn to improvise, developing their saxophone skills and help finding their own voice.”

But, he adds, “At this point in my life, I really want to create and enjoy playing more than ever.”