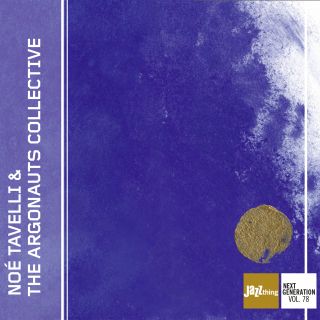 Catalog number: DMCHR 71359
Releasedate: 03-05-19
- Beautiful enchanting music, steeped in tradition and delivered by musicians in perfect symbiosis” (Marcel Papaux)
- The band offers a smart and ambitious blend of traditional and modern jazz combining both complex form and freedom
- Their music, which is collectively shaped and written, is fed by the influence and dynamism of the New York Jazz scene

Founded in 2016 by the Swiss drummer Noé Tavelli, Noé Tavelli & The Argonauts Collective is an ensemble that brings together some of the most promising young European jazz musicians.
Their music, which is collectively shaped and written, is fed by the influence and dynamism of the New York Jazz scene, as each member of the band has spent extended time in the “Big Apple”. The band, a chord-less quartet, offers a smart and ambitious blend of traditional and modern jazz combining both complex form and freedom.

In June 2017, as we entered the famous La Buissonne studio in Pernes-les-Fontaines (France) the band had just finished a ten-day Swiss tour. It was the first time the Collective had had a chance to perform that many dates in a row and some of our gigs were musical residencies. This really helped us to shape our musical direction and at that point we wanted to keep as much of the momentum of our live performances and bring it inside our “studio sound”. We recorded the whole band in the same room in order to privilege the type of musical interactions that occur while on the bandstand.
Besides capturing our composition book, we also decided to record some “on the spot” improvisations, some duets (referred as interludes) and one collective improvisation with whole band (Improvisation).

The opening tune, “Ruby’s Blessing” is a waltz I wrote while living in Harlem. At the time my first New York home was a very simple room inside a “shared building” ran by an African-American family. Ruby was the landlady and for sure the spirit of the place. Living there, I had the chance to experience their way of life, from the culinary culture of the South, to the constant presence of the Christian-Baptist religion.

“Blanc Comme Neige” is a piece based on a very specific groove that can be heard on the introduction and on the heads. It is also built on an interval series that I have manipulated in different ways. Its title refers to the winter period in New York and its intense blizzards.

“Interlude 1” is an improvised duet between Francesco Geminiani and myself. We have known each other musically for a while now and this is some sort of a free musical dialogue we exchange here.

“Improvisation”. This take is the result of a group improvisation that we recorded at the end of the session. To me it has something special because it sounds like it could have been a written composition. The two horns are floating on top as the bass and the drums maintain a surprising push and pull momentum.

“Byway” is the ballad of the set, it features both Matthias Spillmann and Francesco Geminiani, whose solo at times reminds me a bit of the great Joe Henderson.

I composed “Rush” around the very end of my musical studies at the Manhattan School of Music, a naturally very busy period in time! It is a pretty straight-ahead composition. Nevertheless, it is quite a driven tune with an unusual number of bars and an untypical set of changes. It brings some swinging phrasing into the set and features a beautiful bass solo by Fabien Iannone.

In “Interlude 3”, Matthias Spillmann and Fabien Iannone improvise a musical story. Their sounds melt together in a unique way and they are not afraid of leaving some space in between their phrases. I really like the subtle complexity of their individual tones, the expressiveness they both deploy.

“Giasone”, by Francesco Geminiani, pays tribute to the name of the Argonauts’ mythological leader. It is introduced by an improvised horn duo that develops into a melody and a solo section, both of which navigate over changing time signatures.

The closing number “Moods”, by Geminiani, is a contemplative and meditative piece in which each voice works together in a contrapuntal way. The melody gives the band a frame for a very open and collective improvisation before returning to its original statement.

Originally from Geneva Switzerland, drummer Noé Tavelli (1992) moved in New York in 2015 where he studied at the Manhattan School of Music under the guidance of John Riley, Justin DiCioccio and Jim McNeely. He also graduated from the Drummers Collective in 2011 as well as from the Lausanne Conservatory of Music (Switzerland) in 2015.  Despite his young age, Noé has already been involved in project with major jazz figures such as Dee Dee Bridgewater and David Liebman.  As a performing artist, Tavelli has also appeared with Ohad Talmor, Edsel Gomez, Richard Sears, Florian Favre, Jean-Lou Treboux, Nat Su, Gabriel Zufferey, among many others. He is a 2015 reciepient of the Friedl Wald Foundation for young talents.