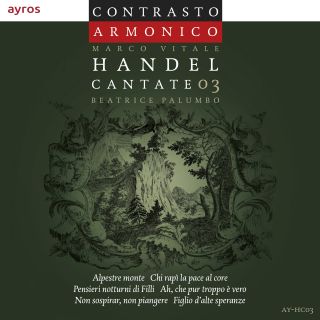 Catalog number: AYHC 03
Releasedate: 03-05-19
- Handel’s cantatas represent an important musical repertoire that until recently has been little known.
- Consisting of about 100 separate works, most were written over a period of a few years for private performance in Italy.
- Booklet notes by Prof. Ellen T. Harris (MIT Boston)

Handel’s cantatas represent an important musical repertoire that until recently has been little known.  Consisting of about 100 separate works, most were written over a period of a few years for private performance in Italy.

They range from musical miniatures containing only two arias connected by recitative and accompanied by continuo (a bass line typically realized by cello and harpsichord) to larger works with named characters, a dramatic story, and rich instrumental forces.  Telling more often than not about the pangs of love, these are intimate works, with texts frequently written by (and sometimes about) members of the privileged audience for which they were composed.  A number of Handel’s cantatas have texts by one of his important Italian patrons, Cardinal Benedetto Pamphilj.

The project of Marco Vitale to record all of Handel’s cantatas is thrilling. The continuo cantatas have never been recorded in full and many have never been recorded at all.  Thus, this project will bring to life largely unknown music by one of the world’s greatest composers.  Further, performance all the cantatas will place the larger, instrumental works in the musical context of their creation.

This project is the continuation of the ‘Handel Complete Cantatas’ series appeared recently on the market with four volumes issued. This is the third volume presented by the ayros recording label, as continuation of the series and it features the Italian soprano Beatrice Palumbo.

Contrasto Armonico presents here 6 cantatas, with an outstanding dramatic value and an extended palette of instrumental colors, grouped by the common theme of unrequited love.
Alpestre montre (Florence/Venice, 1709?) depicts a young man in despair over an unrequited love. The setting is a craggy, alpine forest, where dark shadows and spectres mirror the thoughts and invade the heart of an unrequited lover who says that he will only find peace in death. In the final aria, he asks only that his beloved offer a final farewell at his grave.
Chi rapì la pace (Florence, 1706) may be one of Handel’s earliest Italian works. In the movement pattern aria-recitative-aria, it depicts a similar story. The lover asks, “Who stole the peace from my heart?” and decides it was Cupid who wounded him.
Ah, che pur troppo è vero (Florence, 1707 or 1709) once again presents an unrequited lover. The difference here is that the beloved is distant rather than unresponsive, so the lover, after contemplating death, chooses to hope.
Pensieri notturni di Filli (“Nel dolce dell’oblio”) (Rome, 1707), for soprano, recorder and basso continuo, cannot be precisely dated, but the paper and layout of Handel’s score matches other works from his first year in Rome. In the text of the cantata, the singer watches Phyllis, whom he loves, as she dreams of her own beloved. Apparently, there is a chain of unreciprocated love: the narrator loves Phyllis, who loves another, who seems, alas, to love still another. The singer concludes that being deceived in a dream can have its delights, but when one awakens delight turns to sorrow.
Non sospirar (Florence, 1707 or 1709) is a continuo cantata with two recitative aria pairs. Like Chi rapì il pace, it follows the somewhat reduced pattern of aria-recitative-aria, and, once again, the singer suffers from love. In the first aria, the singer tries to suppress his sighs and tears, keeping his sadness “inside himself completely.” And, once again, Handel turns to a sharply-dotted rhythmic pattern in the bass to depict the lover’s distress,
a continuing motive in his compositional style.
Figlio d’alte speranza (Son of high hopes), set for soprano, violins, and continuo in three recitative-aria pairs, tells the story of King Abdolonymus, born to greatness, reduced to being a gardener, and restored to the throne of Sidon. Unlike the typical cantata in which the singer speaks in the first person, this story is narrated in the third person, giving it an unusual formality. Although the image of a “wheel of fortune” is never specifically mentioned in the text, Handel builds all three arias on this concept using distinct turning motives in the accompaniment of each.

Handel never published his cantatas, probably because they were written in private circumstances, but as a result they served him as a repository of inventive material throughout his life. Especially as he moved from city to city before settling for good in London, Handel chose to give his new audiences a chance to hear music he had written elsewhere.

He studied piano, organ, harpsichord and composition at Palermo’s “V. Bellini” Conservatory, where he took the piano diploma in 2001 and the organ diploma in 2002 with full marks and “Cum Laude”.
He took part in many international master-classes where he developed his skills and taste for baroque music. His concert life began at age of 15, with performances as a soloist and chamber musician. In 2002 he moved to The Netherlands where he studied at the Royal Conservatoire in The Hague.
He took a Bachelor’s degree in organ with Jos van der Kooy and a Master in Early Music (harpsichord) with Ton Koopman.
His musical activity brought him to play in the most prestigious venues and festivals in Europe, USA, Canada and Middle East as a soloist/continuo player or director of his Contrasto Armonico.
Marco Vitale is the co-founder and musical director of “Contrasto Armonico”, baroque orchestra specialized in the performance of music in Italian style and baroque operas, using original instruments and historical performance practices. He is currently involved in the recordings of the Complete Italian Cantatas by Handel (formerly on Brilliant Classics, now on ayros), a thrilling project that will bring light on many undiscovered jewels of Handel which are neither edited nor recorded.
He appeared in radio and TV broadcasts in Netherlands (AVRO), Germany, Austria (ORF), Spain, Poland (Polskie Radio), Italy (RAI), UK (BBC) and Syria (Syrian National Television), and he participated in recordings for Alia Vox (Rameau, L’Orchestre de Louis XV), and Naïve (Vivaldi’s Teuzzone).
In 2012 he founded his own records label ‘ayros’, featuring recordings of Contrasto Armonico, with whom is continuing the project of Handel Complete Cantatas and starting new thrilling discographic projects. In addition to performing with Contrasto Armonico he also gives master-classes about baroque music throughout Europe and Middle East. From 2008 till 2011 he worked at the Higher Institute of Music of Damascus (Syria) for an early music development project.
In 2018 he composed an opera in 17th century style, with the title of “Il ratto di Helena” on a libretto by Virgilio Puccitelli (1636). The opera was commissioned by the Palace of Grandukes of Lithuania, and performed in Vilnius in occasion of the 100 years of Lithuanian independence.
He regularly performs with Jordi Savall, ‘Le Concert des Nations & Hesperion XXI and worked as a guest conductor at Warsaw Chamber Opera.