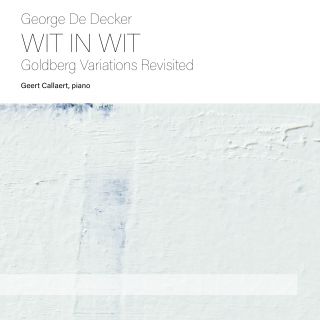 Catalog number: AR 012
Releasedate: 07-06-19
-One of the first recordings performed on Maene's Straight Strung Piano
-30 variations on an aria: WIT IN WIT, inspired by Bach's Goldberg Variations
-Looking for the absolute essence of every variation
-Solo piano, with pre-recorded and edited tape recordings

George De Decker wrote the aria WIT IN WIT (White in White) on commission for the piano recital of 14 November 2017 in the Witte Zaal in deSingel (Antwerp, Belgium).
After the performance by pianist Geert Callaert the relationship with the aria of Johann Sebastian Bachs Goldberg Variations became clear.
Bachs Goldberg Variations are canon, every pianist relates to this piece at one time or another.
A myriad of versions and arrangements De Decker has listened to and analysed, the ear a knife,
in every variation he cut in, looking for the razor-sharp core: what is the essence?

The key and the character of the original composition were preserved, the redundant was skinned until with every variation, only the sound skeleton remained.

The result is a new composition for piano solo and audiotape, but essentially WIT IN WIT is a landscape, a fragile relief of tone, sound and silence.
A note that resounds so long that it stretches into a panorama.
A dissonant that digs depth, and in that depth, rock formations take shape from tone clusters, the air filled with oscillating overtones. Sometimes a certain variation had finished for half a minute before the lack of sound attracted attention, so subtle. De Decker makes sound change into silence that is never empty, but in itself again becomes sound, designer and carrier of the music.
George De Decker as... Composer - sound artist
George De Decker studied piano and composition at the Royal Conservatories of Antwerp and Brussels, orchestra conducting at the Lemmens Institute Leuven and electronic music at the Institute for Psycho-acoustics and Electronic Music (IPEM) in Gent. In 2013, he won the composition contest "Music for Carparks", organised by the Concert Hall Brugge and Interparking. George De Decker's compositions include solo works (mostly with soundtrack), as well as works for large symphony orchestras and sound installations. He also composes for film, art documentaries, television, fiction, theatre, and dance. He has his own ensemble, "SP!TSBERGEN." with 5 young, passionate musicians.

George De Deckers as... Visual artist
Already from a very young age, George De Decker visited many museums and exhibits. The artists in question were his "real" mentors. He studies art history at the Royal Conservatory in Antwerp. As a composer, he created music for art documentaries by, a. o. Jef Cornelis and Stefaan Decostere. George De Decker studied painting under Guy Leclerq at the Academy of Fine Arts in Anderlecht.

Sound and visuals always impact each other in George De Decker's oeuvre. He paints monumental canvases in an abstract pictorial language, with a restrained colorite. The compositions consist of characteristic, broad keys: a robust and powerful signature. He creates sequences of compositions, rhythmic abstractions on canvas that constitute scenic impressions or pure abstractions. These are works of immense expressiveness.
George De Decker also conceives video and audio projects, through which he can simultaneously make his statement as a visual and as a sound artist, such as: Lorca 1937, Ørnen 1897, Die Bezwingung des Chaos...