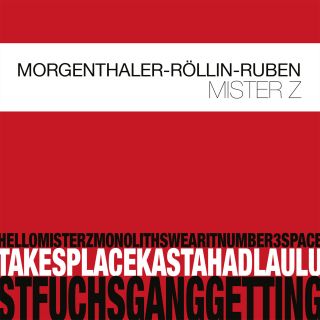 Catalog number: BTLCHR 71248
Releasedate: 06-09-19
This effortless “Instant composing” and the element of surprise are evident features of their music. It leads to an intelligent and heartfelt music, that touches the soul with a lot of charm, putting the listener under it’s spell with it’s groovy and spontaneous passages.
Actually, it's not too much of a mystery. Behind the mystical project name “Mister Z” is no one no less than Frank Zappa, the grandmaster of musical fusion, with whom many impossible elements could be combined to form an astonishingly coherent whole. Didn't he also write the legendary phrase, which people still like to use today, that jazz wasn't dead, but would only smell a little funny?

Meanwhile, there are a number of bands whose jazz interpretation does not stink at all, but come without a musty, mushy after-taste. The trio, formed by Swiss trombonist Robert Morgenthaler and his permanent partner, guitarist Urs Röllin, with drummer Tanel Ruben from Estonia, is undoubtedly one of them. The three recorded an album in the spirit of the idol who died in 1993, in which they flowed “mind open” through nine lively songs and managed to transfer their fun one to one to those listeners who are eager for an alternative to music consumption dominated by playlists.

“Zappa did not allow his creativity to be prevented by any pigeonholes, confronted the concentrate from one music world with another and challenged our listening behavior like no one in his time,” Morgenthaler said as an ardent fan of the music wizard from Baltimore. Of course, one cannot study this Zappa-like approach or learn it through intensive rehearsals; one simply has to feel it. And also be a little bit of Zappa yourself, a musician who always keeps track of all the sounds, rhythms and styles flying around. Morgenthaler, Röllin and Ruben deliberately take their tools to musical and physical limits, creating a highly intense sound world open to all sides. Such a thing may only succeed with an unorthodox cast like this: no bass, but instead trombone and guitar, two tenor-loaded instruments. “The challenge was,” Morgenthaler explains, “to design the pieces in such a way that no one misses a bass, that the guitar or trombone handles this task.” The percussion acts as a connecting link as well as a groove keeper.

There is no doubt that Robert Morgenthaler and Urs Röllin, who have been moving almost synchronously in the vast field of congenital improvisation for more than ten years, need a great deal of primal trust. The fact that Tanel Ruben, whom the Swiss met at Jazzahead in Bremen, was able to penetrate relatively smoothly into this familiar male friendship was because Morgenthaler and Röllin spontaneously saw “a blood brother” in him. The exchange of cultures has played into their cards every second, the trombonist says, “because our music lives from just that.” Familiarity serves as a safety net, and the developing security takes the triumvirate into new, strange regions.

And the risk is rewarded. Known and unknown merge in titles such as “"The Monolith”, “Swear It”, “Fuchsgang”, “Getting Closer”, “Smooth”, “Space Takes Place”, “Number 3” and Ruben's composition “Kas Tahad Ma Jutustan Laulust” into an exciting construct of notes, pulsating beats and pauses. The individual pieces form the blank for the subsequent improvisation, in which, although filigree and disciplined, they are free of restrictions in every respect. Robert Morgenthaler: “We use different playing concepts, from noise to sound, from free pulse to groove, from silence to fullness.” The trombonist emphasizes that every member of the band is free to “rock off” or add a layer of dreamlike sound.

How does that sound? Like uninterrupted surprises, mischievous ideas, unusual alliances, extreme fun and a fresh start into the familiar. And contemporary jazz, as fresh as a mountain stream flowing through a forest full of pines. You can bet on it: Zappa would have liked “Mister Z”. And he’s not the only one.