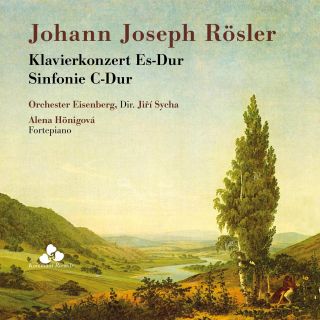 The recordings of the recently-discovered Piano Concerto in E flat major and Sinfonia in C major by Bohemian composer Johann Joseph Rösler (22 August 1771 Banská Štiavnica - 28 January 1812 Prague) bring insight into the work of an outstanding musician, who worked in Prague and Vienna at the beginning of the 19th century. Although his creative period was relatively short, he composed more than 200 works and became famous as a talented composer, virtuoso pianist, and popular Kapellmeister.

Rösler‘s name is mentioned in most 19th century dictionaries, but in the 20th century his work was almost forgotten. In addition, he was often confused with the composer Anton Rössler, called Rosetti, a Kapellmeister one generation older from Ludwigslust.

Johann Joseph Rösler grew up in Prague, the capital of the Bohemian Kingdom (part of the Habsburg monarchy) where his father, Carl Anton Rösler, held an important administrative function of Gubernialrath. ……This enthusiastic atmosphere must have been experienced by the passionate self-taught musician Johann Joseph Rösler while a student of the gymnasium and later reading philosophy at Charles University (1790-1792). His father provided him with the basics of musical education but did not support his professional ambition. Rösler did not let himself be discouraged, and his independent study of composition and piano reached such a great level that he was offered the position of a kapellmeister in 1795 at the Guardasoni Opera Company. In 1805, he accepted an invitation for the position of Kapellmeister at the Court Theatre in Vienna, and in July of that year he entered the service of one of the most important Viennese patrons of music, Prince Franz Joseph Maximilian Lobkowitz. He became a kapellmeister of the Lobkowicz Kapelle (working with Anton Wranitzky and Anton Cartellieri) and accompanied the prince even during his regular stays in his Bohemian residences: in the summer at Eisenberg (Jezeří) Castle, in autumn in Roudnitz an der Elbe (Roudnice nad Labem). Rösler also directed the premiere of his operas at the Estates Theatre. This promising career was unfortunately interrupted by disease. In 1810, the first symptoms of tuberculosis appeared, and Rösler succumbed in January 1812. Many period testimonies mention that with the death of such a gifted and prolific musician, they had also lost a kind man..(Excerpt from the Booklet)

Alena Hönigová completed harpsichord studies in the Prague Academy of Music, going on to her soloist´s diploma with Giedré Lukšaité Mrázková and Zuzana Růžičková in 1999. From 1999 to 2004 she pursued postgraduate studies at the „Schola Cantorum Basiliensis“ concentrating on the harpsichord, fortepiano, thoroughbass and improvisation. Her teachers were Andrea Marcon, Edoardo Torbianelli, Jesper Christensen, Gottfried Bach and Emmanuel le Divellec. Her special project was the collection „Song of  Solomon“ by Salamone Rossi, which she wrote a treatise on and recorded.

Together with the „La Vinciolina“ ensemble, she won first prize in the „Gotha Competition“ at the Handel Festival in Göttingen in 2001. She began working as a harpischordist and rehearsal pianist at the „Schola Cantorum Basiliensis“ in the same year. In 2002 Alena Hönigova formed the „Muscadin Baroque ensemble“, with which she has premiered several contemporary works, including the chamber opera „Racine´s Esther“ by Boris Yoffe in 2006. She was organiser of the concert series in St. Leonhard´s church in Basel 2004 – 2010. Since September 2011 is she leading the spiritual barock concerts in the dominican monastery of St. Giles in Prague. Since sommer 2012 is she realising a Music Festival in the castle Jezeří in north Bohemia (composers conected to Franz Maxmilian Lobkowicz, beginnig of 19th century).

As a soloist, accompanist and chamber musican, she frequently collaborates with many early music ensembles and soloists. As a recording artist, she appeared on numerous solo and chamber music CDs, such as „La primavera del barocco“ (Ars Musici AM1406 - 2), Johann Sebastian Bach: Sonatas for flute and harpsichord (together with Corina Marti)(Editions du Nopal, Fr), Salomone Rossi: The Song of Solomon –a collaboration of „Ensemble Muscadin“ and „Profeti della Quinta“ (Panclassics, CH, PC 10214), Jan Ladislav Dussek: Fortepiano works (Koramantrecords, CH, KR 11001).