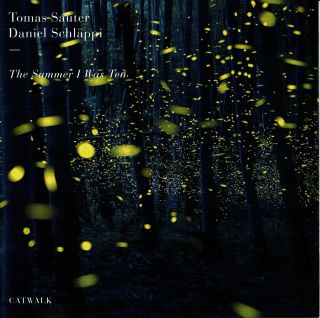 The Summer I Was Ten

Catalog number: CW 1900182
Releasedate: 21-06-19
- Delicate, intimate and compelling atmosphere full of spontaneity, love of life, and the joy of making music
- Chamber musical highlight in jazz - The art of the duo
- Worldclass made in Switzerland

Since their much appreciated first release Indian Summer in 2006 (CATWALK 060001) Tomas Sauter & Daniel Schläppi delighted their audience in numerous con-certs. The debut album was sold out and had to be reissued before the fabulous duo presented its second release First Day in Spring in 2011 (CATWALK 110008) where they pursued the chosen path in a convincing manner.

In 2019 the two great players and tremendously inspired improvisers release their third album The Summer I Was Ten (CATWALK 190018). Their congenial playing, a trademark from the beginning of their collaboration, has matured over the years. Sau-ter and Schläppi let their intuition wander and one can hear by their interplay that they are two masters of their craft giving each other blind trust.

The music unfolds a wide array of musical themes, styles and ideas. It ranges from chamber jazz ballad-like pieces to hidden Blues, from impressionistic flows to de-tailed miniatures, from Folk inspired connotations to smart, mischievous modern sound. Sauter and Schläppi merge their musical cosmos with a beguilingly ease which enables the two masters of delicate playing to develop musical conversations beyond the common expectations of the listener.

Each album and concert of the sub-lime harmonic duo deserves to be heard many times and it is truly balm for the mind and soul.

Daniel Schläppi is a renowned bandleader, composer and bass player. He has won several awards and runs the well-known record label CATWALK together with Tomas Sauter. The critics characterize him as ‹master of groovy sounds› of ‹outstanding musicality›. The projects that he initiated as creative spiritus rector are regarded as ‹breathtaking›, ‹world class›, ‹sensation› and even as ‹jazz revelation›. He has performed and recorded with Marc Copland, Jorge Rossy, Art Farmer, Tomas Sauter, Colin Vallon, Nils Wogram, Eric Alexander, Domenic Landolf and many other fan-tastic musicians. Please find comprehensive information at www.danielschlappi.ch.

Facts:
- Daniel has played hundreds of concerts in Europe within three decades as a bassist and worked with renowned pro-jects in the range from Freejazz through Mainstream to Radio, Film and Theater Music. More than 30 CD productions. Several of them have been awarded. - Since 2002 he has been working on his own projects and has released an impressive number of highest quality CDs as co/leader and producer. The following CDs have been published under his name: ‹Voices› (2002, with Domenic Lan-dolf), ‹Dimensions› (2002, with Colin Vallon), ‹Forces› (2005, with Colin Vallon and Nils Wogram), ‹Dimensions Live› (2007, with Colin Vallon), ‹Voices Live› (2008, with Domenic Landolf), ‹Essentials› (2012, duo with Marc Cop-land), ‹More Essentials› (2015, duo with Marc Copland). - Since 2005, he has been working intensively with guitarist Tomas Sauter. The have recorded four CDs such as ‹Indian Summer› (2006), ‹First Day in Spring› (2011), ‹Wonderland› (2011, in trio with Jorge Rossy), ‹Perceptions› (2013, in trio with Jorge Rossy). - Since 2005 he is running the label CATWALK in collaboration with Tomas Sauter. - Since 2008 various features and reviews by jazz experts have been published by renowned journals and broadcasting companies (Jazzthing, Jazzthetik, Jazzpodium, Deutschlandfunk, Concerto, Hörspiegel, NZZ am Sonntag, SRF 2 KULTUR Reflexe, ORF Ö1 JAZZNACHT, Jazz’n’more, All About Jazz etc.). - In 2006 he teached a workshop at the ‹Département Jazz der Haute Ecole de Musique›, Lausanne. - In 2008 Daniel organized the festival ‹Werkschau› with four of his own groups. The festivals program featured musi-cians such as Colin Vallon, Nils Wogram and Domenic Landolf. - In 2008 he teached a masterclass at the ‹Musikhochschule Luzern›. - In 2014 he played a concert in Jazz Gallery in New York in duo with and on the invitation of Marc Copland.
- Apart from the already mentioned musicians Daniel has performed and/or recorded with: Art Farmer, Eric Alexander, Ray Anderson, Dré Pallemaerts, Steve Elson, George Robert, Michael Zisman, Elina Duni, Julian Sartorius and many others. - His artistic work has been supported by more than 20 foundations and art councils. - He has been engaged actively in cultural and professional-political associations such as BeJazz, SMS/Swiss Music Syndicate (as member of the board and management), Swissperform, Swiss Music Council, Suisseculture. - He initiated and perpetuated the Festival BeJazz Sommer (first edition in 2003) and organized an international compo-sition competition on the subject of Friedrich Dürrenmatt’s comedy ‹Der Mitmacher› (2005). - He has received several awards for his work: half-year scholarship in New York by the City of Berne (2010), Recogni-tion Price by the Canton Berne (2006). He was finalist at the improvisation contest ‹Concours Marguerite de Reding› in 2004, and his band ‹Voices› was first choice for the festival ‹Diagonales› in 2003.