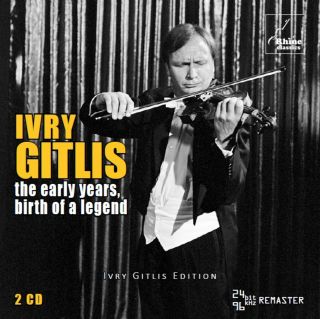 Catalog number: RH 011
Releasedate: 02-08-19
- Early recordings, dated 1949-1963, by the great violinist Ivry Gitlis.
- This recordings rediscovery is a project dedicated to and realized under the auspices of Ivry Gitlis.
Yitzhak-Meir (Isaac) Gitlis was born in Haifa, Palestine Mandate to Jewish parents, who emigrated in 1921 from Kamianets-Podilskyi, Russia, now Ukraine. In 1951, as suggested by his teacher Alice Pashkus, Gitlis participated in the Long-Thibaud Competition in Paris, where he took fifth place (CD1). During the preliminary stages of the competition, a rumor circulated that he had stolen a Stradivarius violin during the war, which caused a scandal on the day of the final. Six years after the fall of Hitler, being a Jew in France was still causing debate.
In 1963, he was the first Israeli violinist to play in the Soviet Union. He gave a series of concerts under the cultural exchange program of the Soviet Union and Israel, starting in Vilnius (23 October 1963). His other concerts were given in Moscow, Leningrad, Kiev and Odessa. In the same year, invited by Giancarlo Menotti, he played in Italy at Spoleto’s “6th Festival dei Due Mondi” (CD2).

Gitlis acquired his first violin when he was five years old and started lessons under M.me Velikovsky together with his friend Zvi Zeitlin. He then studied privately with Mira Ben-Ami, a pupil of Joseph Szigeti.

When he was eight, she arranged for him to play for Bronisław Huberman, which prompted a fundraising campaign to allow him to study in France.

In 1933 he arrived with his mother in Paris and started to take lessons with Marcel Chailley, husband of the pianist Céliny Chailley-Richez. Being very close to their family, he was introduced to George Enescu and Jacques Thibaud.

In that period he decided to change his birth name (Isaac) to Ivry. At 11, Gitlis (Jitlis) entered the Conservatoire de Paris in the class of Jules Boucherit, and graduated in 1935.

In 1938–1940, his teachers included George Enescu and Jacques Thibaud in Paris and Carl Flesch in Spa, Belgium and later in London.

In 1940, during World War II, he went to London where he first worked for two years in a war factory and was then assigned to the artists branch of the British Army. He gave numerous concerts for the Allied soldiers and in war factories.

After the war he made his successful debut with the London Philharmonic Orchestra and subsequently played with the BBC and all other principal orchestras of Great Britain.

In 1950, in Vienna, he made his first commercial recording with the Paganini/ Wilhelmj Concerto under the baton of Kurt Woss (Remington RLP-149-20).