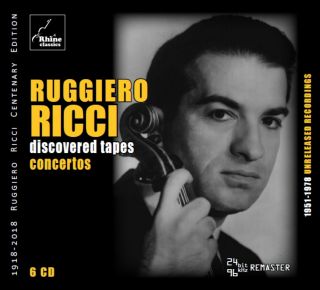 Catalog number: RH 008
Releasedate: 02-08-19
- First of three boxes devoted by Rhine Classics to Ruggiero Ricci, this one is dedicated to rare Concertos recordings.
- Project realized under the auspices of M.me Julia Ricci, Ruggiero’s wife.
Ricci is recognized to have greatly contributed to the world’s renewed appreciation and affection for the great 19th Century composers, though he maintained a broad repertoire including over 50 Concertos with orchestra.Ricci has performed the world premieres of several contemporary composers including Gottfried von Einem, Richard Flury, Urs Joseph Flury, Vittorio Giannini, Alberto Ginastera, Alexander Goehr, Gail Kubik, Benjamin Lees, Gerard Shurmann and Carlos Veerhoff (CD6). His official discography encompasses the widest repertoire of any violinist . This 6 CDs set presents live and studio recordings, ranging from 1951 to 1978, including some rarities, never recorded commercially, like the Ginastera Violin Concerto (CD2), Émile Jaques-Dalcroze Violin Concerto No.1 (CD3) and Paganini Violin Concerto No.6 (CD5).

Ruggiero Ricci was born in 1918 in Northern California to a family of patriotic Italian immigrants who named him Woodrow Wilson Rich and his brother (that became a renowned cellist) George Washington Rich.

His ambitious father, a trombone player, instructed his children to become musicians (“either musician or garbage man”).

Ricci’s first teacher, from the age of six, was Louis Persinger, same mentor of Yehudi Menuhin. His debut in 1928 at the age of ten in San Francisco, playing a memorable program of works by Vieuxtemps, Saint-Saëns, Mendelssohn and Wieniawski, accompanied by Persinger on the piano, astounded the audience and started him on the road to early stardom. His consecration as a world class “wunderkind”, one of the 20th century’s few authentic prodigies, came in 1929 in New York when the leading critic of the day wrote: “All that great violinists do, he did.” There he gave his first orchestral performance, with Mendelssohn Concerto.

In 1930, Persinger introduced him to Fritz Kreisler and Jacques Thibaud on the occasion of a West coast concert tour. Although further tuition by Fritz Kreisler was intended, Ricci decided to go to Berlin to study with Georg Kulenkampff. He learned the totally different “German style” of playing in the tradition of Adolf Busch avoiding glissando and portamento. He continued his studies with Mishel Piastro and Paul Stassevich, both pupils of Leopold Auer, and again with Persinger.

In 1932, at the age of fourteen, he made his first European tour, a highly sensationalized series of concerts with the world’s greatest orchestras. He served in the U.S. Army during WWII, from 1942 until 1945, and became “Entertainment Specialist”. During those years he played and broadcast hundreds of concerts under a variety of unusual conditions, often without an accompanist, exploring and presenting the largely unexploited solo violin repertoire.

Paganini music played a central role during this period. Ricci followed the tradition of Váša Příhoda, the Czech virtuoso, who performed Paganini as a central part of his repertory. Ricci gave the U.S. premieres of both 4th and 6th Violin Concertos (CD 5-6). Giving so much attention to the works of the genoese composer, as he later said, he learned much of the violin-technique from Paganini’s works.