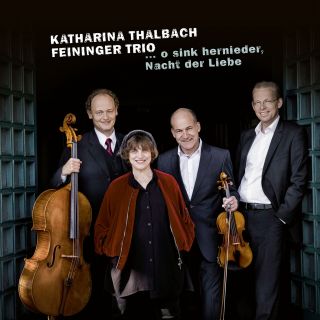 - The actress and recitateur KATHARINA THALBACH is most likely the best known German actress
- Basically a project for the various live concerts of K. Thalbach and the feininger Trio
- The theme of the album leads towards the tristes and sadness of Wagner’s Tristan (Love duet Act II)

….o night of love, descend upon us
That motif from Wagner’s Tristan and Isolde sets the musical and lyrical mood for the selection of pieces and poems in the Feininger Trio’s programme, performed for the first time at the Baden-Baden Easter Festival.

Love and death: The goal in selecting the poems was to find a mood similar to Schubert’s Notturno and Chopin’s Piano Trio Op. 8: texts that could establish a lyrical dialogue with those pieces. How can we grasp the great subject of love and death? How can we associate language with music, but without relegating language to a subordinate role? How can a series of poems tell their own story while at the same time highlighting the expression conveyed by the music, which is still the precondition for this musical-poetical programme?

Start at the beginning: Following Schubert’s Adagio (later renamed Notturno ), the theme of love is addressed in Ingeborg Bachmann’s poem Erklär mir Liebe (“Explain love to me”) and in Rilke’s Liebes-Lied (“Love Song”), which features metaphors associated with string music. Allegro con fuoco is the tempo marking of the first movement in Chopin’s Piano Trio, Op. 8. As if the poem had been listening to the music, it starts out with a “Fortissimo”, the title of Elke Lasker-Schuler’s poem Du spieltest ein ungestümes Lied (“You played me a wild song”)....
(Excerpt from the booklet notes by Brigitte Landes)

Born in East Berlin in 1954, Katharina Thalbach practically “grew up in the theatre”: her mother
was an actress and her father was a stage director. Her mother died when she was only twelve, and
Helene Weigel, the widow of Bertolt Brecht, took Katharina under her wing and provided her with a
training contract as a master pupil in drama. At age thirteen, Katharina gave her theatrical début as
“Betty, the Whore” in Erich Engels’ staging of Brecht’s Threepenny Opera; from the age of fifteen
she also alternatively took up Polly, one of the main roles.

After finishing secondary school and obtaining her theatre diploma, Katharina Thalbach started performing
at the Berliner Ensemble and at the Volksbühne (of which her father, Benno Besson, was the director).
After her first TV appearance at the age of four in the movie Begegnung im Dunkel, Katharina played further
child roles for television, occasionally alongside her mother. In 1973 she gave birth to Anna, who likewise
became an actress: in recent years, mother and daughter have frequently been featured together in joint roles.
Katharina Thalbach performed in stagings by Siegfried Kühn, Egon Günther, Charlotte Buff, Konrad Wolf,
Peter Hacks, and Karge-Langhoff.

In December 1976, one month after the expatriation of renowned East
German singer-songwriter Wolf Biermann from the GDR, Katharina Thalbach moved to West Berlin
along with her partner Thomas Brasch, a critical author who had fallen out of favor with the East
German regime. She gave her West German acting début upon the Schiller Theatre Workshop Stage in
1978. Directors of the likes of Hans Lietzau, Jürgen Flimm, Ernst Wendt, Benno Besson, and Hans Neuenfels
have chosen her to play major roles. In 1995, at the Théâtre de Chaillot in Paris she played the main
role in Brecht’s Mutter Courage in a staging by Jérome Savary. Katharina Thalbach has played main
roles in films directed by Margarethe von Trotta, Volker Schlöndorff, Hans W. Geisendörfer, Thomas
Brasch, and Doris Dörrie. In the late 1980s she also started to direct plays herself (Macbeth, Mann
ist Mann, Romeo and Juliet, As You Like It, Threepenny Opera, Der Hauptmann von Köpenick). Her
latest staging was Brecht’s Arturo Ui at the Comédie Française in 2017. She has continued to perform
roles for film and television: the latest in David Fritz’s 2018 film 100 Dinge.

Katharina Thalbach is a member of the German Film Academy, of the Hamburg Free Academy of the Arts, and
of the Berlin Academy of the Arts. She has been awarded a number of outstanding German prizes including
the Grimme Television Prize and the Berliner Zeitung Drama Critics’ Prize; in 2015 she received the German
Federal Cross of Merit, and in 2018 she was knighted Officier de l’Ordre des Arts et des Lettres in Paris.

The Feininger Trio was founded in 2005 by pianist Adrian Oetiker and two members of the Berlin
Philharmonic: Christoph Streuli (violin) and David Riniker (cello). They named their piano trio after
painter, designer and Bauhaus co-founder Lyonel Feininger (1871-1956), whose former atelier in the
Berlin district of Zehlendorf was located in the vicinity of the room where the trio now rehearses;
the three musicians feel a special, deep connection with Feininger as a figure of his time and as a
creative artist.

The ensemble aims for a sound that is warm, expressive and refined, while covering a wide range
of styles and daring to explore new musical frontiers. Music critics frequently point out the Feininger
Trio’s great breadth of nuance and timbre, along with an “expressive, gripping, at times almost
ecstatic approach” (Fono Forum).

The Feininger Trio has performed in a variety of venues in Berlin, Hamburg, Salzburg, and Munich,
and has participated in a number of recital series; they are also regularly invited to the Baden-Baden
and Zurich festivals, and performed at the Prague Spring Festival for the first time in 2019.
The ensemble has started to focus its programmes on certain subjects. Thus, for instance, they
devoted a series of recitals to music from Bohemia, as documented in their 2013 release on the
CAvi-music label with works by Suk, Smetana, and Dvoˇrák.

In the 2017 season their performances
focused on French music, leading to a CAvi-music release featuring the trios of Debussy and Ravel.
Then, in the 2018/19 season the Feininger Trio embarked on a Brahms cycle in co-production with
Deutschlandradio, combining the three Brahms piano trios with works in the same genre by Zemlinsky,
Korngold, and Goldmark.
In German-speaking countries, the Feininger Trio is well-known for its collaborations with actress
Katharina Thalbach.
www.feiningertrio.de