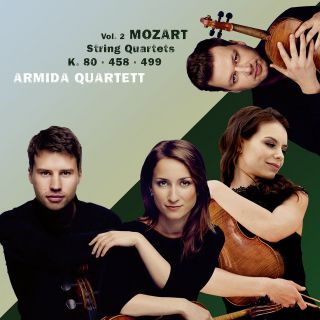 - The German ARMIDA QUARTETT, winner of the ARD competition 2012, has scheduled to record all of Mozart’s string quartets as a cooperation with G. Henle Publisher’s.
- The first Volume received rave reviews, the NDR Broadcast station resumed: “extremely lively and full of energy, transparent in the sound picture, following all of Mozart’s intentions….” (9-2015)
- The ARMIDA QUARTETT counts as one of the most influential and prominent string teams in Europe, and received a standing ovation during their first US Tour in April 2018.

“The Armida Quartet is holding an unusual kind of rehearsal, skimming through three Mozart string quartets with musicologist and Henle’s publishing director Wolf-Dieter Seiffert. The focus this time is not on sound quality, musical character, or developing an extended formal overview – all qualities for which the Armida Quartet is well-known – but on achieving a good match between philological accuracy and practical music-making.

Seiffert is working on a new edition of the Mozart string quartets for his publishing house in Munich, and has sought out direct contact with the members of the Berlin string quartet to clarify doubts regarding dynamics, ties and tempi (see the interview with Mr. Seiffert in the booklet). When a case is truly difficult, the most technically feasible or desirable alternative helps him decide which variant will ultimately figure in the new Urtext edition: will it be a variant from Mozart’s autograph, or from the first printed edition? This method is particularly productive when an editor can work with ensembles as well-versed in historical performance practice and aesthetics as the Armida Quartet.

The publishing house is not the only partner to profit from this new form of dialogue between musicology and practical music-making. Martin Funda, the Armida Quartet’s first violinist, says that he has thereby gained a better grasp of several matters not often mentioned among performers: “For instance, we have become familiarized with several stages of the procedure from the autograph manuscript to the copyist, then leading to the first and second editions: back then, much of the work involved in publishing music was truly laborious, and for us it is fascinating.”

A closer look at the process ultimately shows that any modern edition is a compromise between several sources, some of which stand in contradiction with one another. The much-vaunted “last authorized version” may have existed in the case of a perfectionist 20th-century egomaniac such as Karlheinz Stockhausen, but we seldom encounter it in pragmatically oriented geniuses of the likes of Bach or Mozart. (Excerpt from the booklet notes by Michael Struck-Schloen)

“Without a doubt, the Armida Quartet is one of the young newcomer ensembles that lets us experience music in a new way. We need not worry about the future of chamber music: it is already here.”

RONDO magazine, 2 Jan 2016 With their spectacular triumph at the International ARD Competition in Munich in 2012, where they won First Prize, the Audience Prize and six further prizes, the young string quartet from Berlin embarked on a unique musical career. The BBC featured them from 2014 to 2016 in a great number of recitals and broadcast recordings within the framework of its “New Generation Artists” series. In the 2016/17 season they were part of the renowned “Rising Stars” series organized by the great European concert halls; ever since then, the quartet tours the finest chamber music auditoriums in Europe, Asia, and the US.

Founded in Berlin in 2006, the Armida Quartet took its name from an opera by Haydn, the “father of the string quartet”. They have studied with former members of the Artemis Quartet and Rainer Schmidt (Hagen Quartet), drawing further inspiration from Reinhard Goebel, Alfred Brendel, Marek
Janowski, and Tabea Zimmermann. Apart from regular appearances at outstanding European music festivals such as Mecklenburg- Vorpommern and Rheingau, the quartet has enjoyed great success at the Concertgebouw in Amsterdam, the Philharmonie in Berlin, and Wigmore Hall in London. The ensemble also takes up the function of artistic director: not only as Artist in Residence for the Duisburg Philharmonic Orchestra, but also with its own recital series, “Mozart Exploded”, which has caused a sensation from Berlin to New York. Planned over a time span of several years, this extensive series will gradually present the complete Mozart string quartets, coupled on each occasion with contemporary music and experimental recital forms.


In 2016 the young musicians launched a special cooperation project with the renowned G. Henle music publishing house: they not only serve as consultants for the new Henle Urtext edition of the complete Mozart string quartets, but they also make their own fingerings and bowings available for the associated Henle Library App. Thus, the Armida Quartet is not only placing itself at the forefront of technical musical development, but is strongly advocating for a closer collaboration between performing artists and musicologists in the future. With its complete recording of the Mozart string quartets foreseen to appear in installments up to 2021, the Armida Quartet will thus be able to present these new accomplishments to a wider audience.

The ensemble’s debut CD in 2013, featuring works by Béla Bartók, György Ligeti, and György Kurtág, was selected by the German Record Critics’ Award for its critics’ choice list. Further recordingsensued, with works by Mozart, Beethoven, and Shostakovich, followed by the CD Fuga Magna in 2017, a fugue journey through the centuries. Working with chamber partners is an inspiration for the Armida Quartet: they have additionally worked with Thomas Hampson, Martin Fröst, Tabea Zimmermann, Jörg Widmann, Julian Steckel, Sabine Meyer, and Daniel Müller-Schott. Apart from their concert activities, the quartet gives masterclasses in Germany and abroad, and they are active in social programs and youth projects including Rhapsody in School and Yehudi Menuhin Live Music Now.