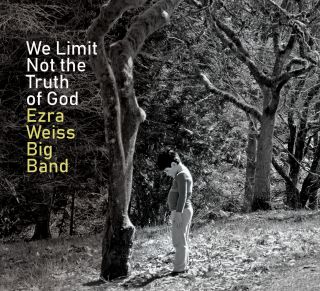 We Limit Not the Truth of God

Catalog number: OA2 22170
Releasedate: 06-03-20
- “A bold, inspired figure in the contemporary jazz arranging scene.” -Josef Woodard, DownBeat
- All compositions and arrangements by Ezra Weiss
Portland-based composer/pianist Ezra Weiss has composed and arranged for many albums, musicals and multi-media events and released six albums as a bandleader over the last 16 years, but had yet to present his own large ensemble recording. "We Limit..." marks that debut while offering a timely, impassioned statement concerning the times we live in, addressed to his young children. Through emotionally expressive compositions performed by a stellar ensemble, with his own narration interspersed between, it’s both a loving message passed down from father to children as well as a profound and deeply felt plea for togetherness and empathy. The brilliant 17-piece big band includes such distinctive soloists as saxophonists John Nastos, Rob Davis, Renato Caranto and Mieke Bruggeman; trumpeters Farnell Newton, Derek Sims and Thomas Barber; trombonists Stan Bock and Jeff Uusitalo; and flutist John Savage. The album was recorded live in the resonant Alberta Abbey, a historic church turned performance space in Portland, Oregon.
Composer/pianist Ezra Weiss is "a bold, inspired figure in the contemporary jazz arranging scene." (DownBeat) He has released six albums as a bandleader: The Five A.M. Strut (2003), Persephone (2005), Get Happy (2007), The Shirley Horn Suite (2010), Our Path To This Moment (2012), and Before You Know It [Live in Portland] (2014). All of these CD's have received substantial national and international acclaim from the press, and have spent significant time on the JazzWeek Radio Charts.

Additionally, Ezra composed the music for the Portland Jazz Composer's Ensemble's multimedia concert and recording, From Maxville To Vanport (2018). He also wrote the big band arrangements for Derek Hines' recording The Long Journey Home (2017), which led to the formation of the Ezra Weiss Big Band.

Ezra currently leads his own big band and sextet, performing at major jazz festivals and clubs throughout the U.S., including Dizzy's Club Coca-Cola, Smalls, the 55 Bar, and Tonic in NYC; Ryles in Boston; Nighttown in Cleveland; Chris' Jazz Cafe in Philadelphia; The Triple Door in Seattle; Jimmy Mak's in Portland; and the Catalina Bar and Grill in Los Angeles. His bands have featured such luminaries as trumpeters Michael Philip Mossman, Peter Evans, and Farnell Newton; saxophonists Antonio Hart, Vincent Herring, Mark Gross, and Dayna Stephens; bassists Corcoran Holt, Ameen Saleem, and Curtis Lundy; and drummers Kassa Overall, Steve Williams, Jason Brown, and Billy Hart (for whom Ezra also served as arranger), among others. He also co-led the Courtney Bryan/Ezra Weiss Jazz Orchestra in New York City.

Further, Ezra has composed music and lyrics to three children's musicals: Alice in Wonderland: a Jazz Musical (2009) Don't Let the Pigeon Drive the Bus! (2010), and Cinderella (2013). All of these musicals were designed to expose young children to jazz. Alice in Wonderland and Cinderella were each named one of the Top 10 Cast Albums of 2009 and 2013 respectively by TalkinBroadway.com.

Ezra has won the ASCAP Young Jazz Composer Award three times and has been listed in DownBeat Critics Polls in the Rising Star Arranger category. He holds a Bachelors in Jazz Composition from the Oberlin Conservatory of Music and a Masters in Jazz Piano Performance from Queens College. His teachers have included Wendell Logan, Neal Creque, and Bruce Barth. He currently lives with his wife and two sons in Portland, Oregon, where he teaches at Portland State University.