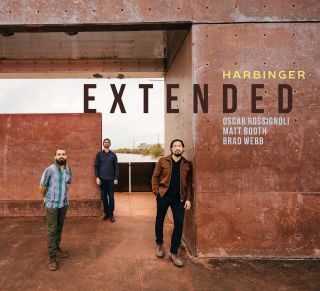 Catalog number: OA2 22171
Releasedate: 14-02-20
- "These three musicians sound as if they were destined to play with each other. Their interactions, improvisations and the seamless way their compositions flow from cut to cut feel instinctive. Extended exemplifies creativity."  (Geraldine Wyckoff, Offbeat)
- Extended creates a rich, sculpted landscape, much in the tradition of modern piano trios like E.S.T., but rooted firmly in the musical soil of their adopted hometown
Meeting in the storied musical environs of New Orleans, Honduran pianist Oscar Rossignoli, Pittsburg bassist Matt Booth and Lousiana-bred drummer Brad Webb, bring their varied pasts together in the development of an expansive group identity through their distinctive writing and dynamic improvisational reflexes. With each contributing and structuring their compositions with awareness of the other's musical personalities, the feeling of a collective consciousness invigorates. From the cool groove and fleet soloing from Rossignoli on his own title track, to the galloping "Connie," or the delicate and open-aired "Loft Spaces,".

EXTENDED is the New Orleans based trio of Oscar Rossignoli on piano, Matt Booth on bass, and Brad Webb on drums. All of them compose for the group with the particular musical personalities of the group foremost in mind. Their debut LP from the spring of 2017, released on Breakfast 4 Dinner records, has received praise for its distinctive compositions and dynamic group interplay. Following the album's release, Extended has toured within the country and continues to play shows that leave audiences invigorated and fulfilled. As the whole world knows, the city of New Orleans knows no shortage of the highest caliber of players in the world, but recently locals have been thrilled to see the development of a new collective - EXTENDED - that has quickly come to find a place among our brightest stars.