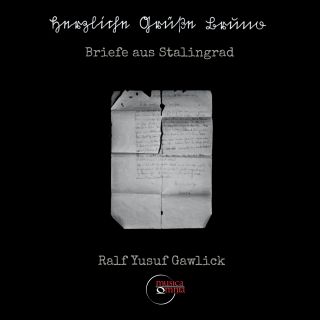 Catalog number: MO 0712
Releasedate: 06-09-19
- First performance of a very personal piece, based on the letters of the composer’s uncle.
- Recorded in several musical layers.
- Many original recordings from the 30ies and 40ies are part of the piece

Letters from Stalingrad
„
Herzliche Grüße Bruno (Best Regards Bruno) – Briefe aus Stalingrad (Letters from Stalingrad) is an electro-acoustic work conceived from the last letters written by my young uncle before being listed as missing in action in Stalingrad in late December 1942. Although there will forever be tragically unanswered questions as to Bruno’s exact fate, there is much we do know from the time before he was sent to Stalingrad in August 1942. First there are biographical details of his service information provided by the Deutsche Dienststelle and the Deutsches Rotes Kreuz (German Red Cross) ...........“
Ralf Yusuf Gawlick

A native of Taiwan, Chi-Chen Wu came to the United States for graduate study, earned masters
and doctorate degree from New England Conservatory. Alongside her performing career she is a
frequent presenter of papers and lectures at scholars conferences. Dr. Wu is Associate Professor
of Piano at the University of Wyoming.

Moritz Ernst was born in 1986 and began playing the piano an the ago of five. After graduating
from high school he studied piano at Detmolder Musikhochschule and in London with Peter
Feuchtwanger. In 2005 he continued his studies at the Schola Santorum Basiliensis with Prof Jörg-
Andreas Böttcher. Since then Moritz Ernst performs worldwide as a pianist, harpsichordist and
chamber musician, focussed mainly on early and contemporary music. He has released many CDs
so far, some of them on Perfect Noise.


Georg Gädker is a much sought-after soloist. After having received his master´s degree at the
Guildhall School of music in London he startet performing worldwide, collaborating with famous
musicians such as Masaaki Suzuki, Hans-Christoph Rademann, Reinhard Goebel, Helmut Rilling
and others.

Ralf Yusuf Gawlick, of Romani-Kurdish descent, was
born in Germany in 1969. His works include solo,
chamber, orchestral and choral music, traversing a
wide range of styles and often exploring aspects of his complex
international heritage. His music has been commissioned
and championed by a wide range of artists and organizations,
attracting international acclaim from audiences and critics.
In recent years his eight-voice Missa Gentis Humanæ
(commissioned by the Choir of Trinity Church, Wall Street),
song cycle, Kollwitz-Konnex (…im Frieden seiner Hände)
(dedicated to guitarist Eliot Fisk and soprano Anne Harley)
and the autobiographical Imagined Memories (commissioned
by the Vienna-based Hugo Wolf Quartet) have exemplified his
remarkably diverse output, with its frequent references to
the highlights of the Western musical canon and rigorous
compositional standards. His music, published by several firms, has been performed internationally
(in venues including Vienna’s Musikverein, New York’s Carnegie Hall) and is recorded on the
Musica Omnia label in composer-supervised performances by the works’ dedicatees. A professor at
Boston College, Ralf Gawlick lives in Newton, MA, with his wife and fellow musician, Basia.
www.ralfgawlick.com