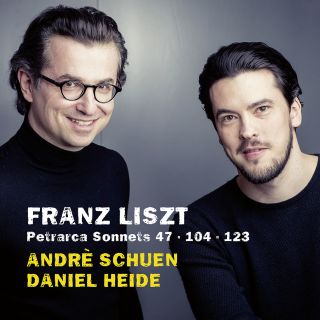 - This is most likely the first time that the three cycles on the Petrarca subject by Liszt – early and late vocal version plus piano solo version are appearing on record for the first time.

- Next to Schubert’s WANDERER there are Beethoven Lieder, Britten Lieder and an album with Lieder by Schumann, Wolf and Martin….all three very successful.

- Nr. 1 and start of a planned Liszt Edition, hosted by the pianist Daniel Heide

„This complete recording of Franz Liszt’s Petrarch Sonnets attempts to highlight the significance of his different versions of the three Sonnets 47, 109, und 123 – possibly for the first time. Musicologists are baffled by the fact that Liszt wrote several versions of the same works. He even set the same texts to different music: not twice, but occasionally three or more times – an absolute exception in the history of music. This is both bewildering and rewarding: Liszt aficionados can embark on a treasure hunt through the scores.

Just imagine our astonishment if Beethoven had modified his Piano Sonata Op. 13 in C Minor, Pathétique, several times in the course of his life, composing the initial movements each time in a different way while introducing new harmonic structures. That would have left us with three Pathétiques in parallel – a sensation!

For several reasons, the versions (or compositions of equivalent value) of Liszt songs such as Freudvoll und leidvoll, Der du von dem Himmel bist, and particularly the Three Petrarch Sonnets have not been duly acknowledged in all their fascinating diversity. Throwing light on this field is like solving a complicated puzzle.……. (Excerpt from the booklet notes bx Daniel Heide)

Baritone Andrè Schuen comes from the Ladin area of La Val of South Tyrol in Italy and grew up speaking
three languages (Ladin, Italian, and German), a versatility reflected in his current vocal repertoire.
At Salzburg Mozarteum University he studied voice with Horiana Branisteanu, as well as lied and
oratorio with Wolfgang Holzmair.

From 2010 to 2014 he was a member of the ensemble at the opera house in Graz. At the Theater an der
Wien (Vienna) he was featured in Nikolaus Harnoncourt’s Mozart/Da Ponte cycle in the roles of Figaro,
Don Giovanni, and Guglielmo. In 2019 he sang his début in the role of Olivier in a new production
staged by Christof Loy of Richard Strauss’s Capriccio at the Teatro Real in Madrid. Three début
appearances await him in the 2019/2010 season: Hamburg, Lisbon and Munich.

His Lieder recitals with pianist Daniel Heide have led him to perform at Wigmore Hall in London, at
the Philharmonie in Paris, at the Amsterdam Concertgebouw, at the Schubertiade in Hohenems and
at Vilabetran, at Vienna Konzerthaus, at the Teatro de la Zarzuela in Madrid, at the Pierre Boulez Saal in
Berlin, at the Heidelberg Spring Festival, and at Tanglewood Festival. CAvi-music released meanwhile
4 albums with Lieder by Schumann, Martin, Wolf, Beethoven, Britten and Schubert (Wanderer ).
www.andreschuen.com

DANIEL HEIDE PIANO
Born in Weimar, pianist Daniel Heide is one of the most sought-after vocal accompanists and chamber
musicians of his generation. He performs in recital series and festivals all over Europe as well as in Asia: for
instance, in the Konzerthäuser in Vienna, Berlin and Dortmund, the London Wigmore Hall, the Schubertiade
in Schwarzenberg and Hohenems (Austria), the Heidelberg Spring Festival, and the Oxford Lieder Festival.
In addition to his ongoing collaboration with vocalists including Andrè Schuen, Christoph Prégardien,
Simone Kermes, Ingeborg Danz, Britta Schwarz, Roman Trekel, and Tobias Berndt, he has also accompanied
lieder recitals with renowned singers such as Regula Mühlemann, Fatma Said, Benjamin Appl, Sheva
Tehoval, Dietrich Henschel, Dorottya Lang, Patrick Grahl, Katharina Konradi, Hanno Müller-Brachmann,
Luca Pisaroni, and Johannes Weisser.
He also loves sharing the stage with actors and narrators including Christian Brückner, Udo Samel,
Thomas Thieme, and Hanns Zischler in the genre of melodrama
Daniel Heide had a close collaboration with the late German-Greek mezzo-soprano Stella Doufexis.
Their CD Poèmes with songs by Claude Debussy was awarded the German Record Critics’ Prize.
As a chamber music partner in duo sonata recitals he has concertized with outstanding soloists
including Sabine Meyer, Tabea Zimmermann, Antje Weithaas, Wolfgang Emanuel Schmidt, Jens Peter
Maintz, and Danjulo Ishizaka.
Daniel Heide is the founder and artistic director of the vocal recital series Der lyrische Salon. Held in
Ettersburg Castle near Weimar, the series has existed since 2011 and is one of the few – anywhere
in the world – that is devoted exclusively to artsong. In that context he has collaborated with a great
number of celebrated soloists of the lied genre in over 60 recitals.
On CAvi-music he recorded with baritone Andrè Schuen, with songs by Robert Schumann, Hugo Wolf,
Frank Martin, and a Schubert album Wanderer; with Roman Trekel most famous Loewe Ballades and
with Stella Doufexis Hamlet Echoes.
www.danielheide.net