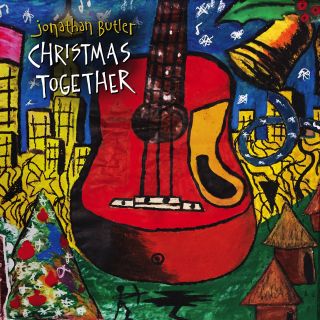 Catalog number: ART 7068
Releasedate: 04-10-19
- A collection of Christmas classics performed by Jonathan Butler and his friends

A collection of Christmas classics performed by Jonathan Butler and his friends. Christmas Together includes performances from smooth jazz legends Dave Koz, Gerald Albright, Keiko Matsui, Kirk Whalum and Rick Braun. This new take on holiday favorites is a must have for your collection!

Jonathan also celebrates his new partnership with the Lalela Foundation in South Africa which provides children from 6 to 18 with an education in the arts, allowing them to express themselves creatively—including painting. Artwork from the students is featured in the packaging, most prominently by Amos Kabulo Maboneng, whose painting won the competition to be used as the cover art for this release.

“This is my second Christmas album, but in many ways, I kind of feel like it’s my first,” says guitarist/vocalist Jonathan Butler, as he talks about his new album, Christmas Together, a collaboration with all-star friends, recorded and mixed in the studio he built in his home in Southern California.

“Christmas is family and friends,” he continues. “It’s about being all together. So, I called my friends – all these amazing players – Sheléa, Dave Koz, Keiko Matsui, Kirk Whalum and so many others – and every one of them simply said, ‘Just say when you want me and where you want me and I’ll be there!’ They brought their love and their spirit into my home and I was honored.”

We associate Christmas music with love and family, happiness and togetherness and Jonathan had that to spare. But his childhood was also a complex mix of darkness and light. It has been a remarkable journey that has taken Jonathan from the Capetown shack in Apartheid-era South Africa he shared with 12 siblings and his parents to international music stardom and a “blessed life” in Southern California with his wife, violinist Nadira Kimberly Scruggs-Butler.

“My family were all musicians,” he recalls. “I grew up in a family where it was all in us. You had to be in the carnival every year, or the choir every year – that’s how we all got our training. From our parents and the community. That’s how we got recognized.”

And recognition came fast and furiously for Jonathan, at first from the locals and shortly after that, his country and eventually the world.

“We never had electricity or heat or water,” he continues. “We used to make a fire outside in an oil drum and we would all sing around that fire. One night, they let me sing out there by that fire and once they really heard me, my parents started putting me out there in local variety shows and concerts.”

The singing phenomenon became a neighborhood celebrity. When he was just seven years old, one of those local performances would be life changing. Jonathan’s brother Danny was a cast member in a well-known South African stage production (“like the Lion King,” he recalls) and the producer of the show came to the Butler’s home to hear Jonathan sing.

“There I was, this little 7 year old kid, singing for this white Englishman and once he heard me, he asked my mother if I could go on the road. My mother let me go, provided that my brother and sister would look out for me. That’s how I got my break.”

Jonathan did musical plays for a number of years, while developing also into a prodigy on the guitar, taught to him by at first his brother and later by listening to influences like Earl Klugh, George Benson, Larry Coryell and Larry Carlton.

And yet, he was a young boy, working as a professional on the road for 8 months out of the year. “I toured a lot, I learned a lot,” he says. “I did that until I was about 12. And then I got to make my first record.”

That 1973 album garnered Jonathan a Best New Artist SARI (South African Music Industry) Award in South Africa. He made history by being the first black artist played on white South African radio, while earning three gold records in 1975 as he grew into his teenage years.

Success, fame and money had arrived. But stardom, when it comes so early in life, is often a mixed blessing and Jonathan was no exception.

“I was a victim of molestation by the very same man who came to our house to audition me,” he says. “And that was the beginning of my spiraling out of control into drugs and alcohol. I share with people a lot, because I know that my calling is beyond music. I feel like music is just a vehicle for me. I know there is much more that God has called me to do. It’s a responsibility that I carry with me.”

Jonathan takes that responsibility seriously. He has devoted much time and energy to helping children in South Africa steer clear of the problems and pitfalls he experienced in his turbulent childhood by starting his Jonathan Butler Foundation to fund music education programs to give at-risk kids in South Africa tools and direction.

“I come from poverty,” he says. “I come from pain and struggle and obstacles. And to be able to connect with the kids in Africa and let them know and let them see it and say to them, ‘Listen, I am the result of this. I come from where you come from. And I’m not just going to give you something for free, but I am going to help you work hard to get it. I’m going to try to inspire you and show you that we all deserve an opportunity and when we get one, we should take it with both hands.’ I was given that opportunity and that’s what I want to teach kids. Even if it’s just one out of a hundred or out of a thousand – you’ve done something.”

Jonathan is also the first Global Entertainment Ambassador for the Lalela Foundation www.lalela.org, a similar but larger charitable entity based in South Africa with greater infrastructure and on-the-ground local support staff. “The vision of Lalela and the vision we had is pretty much the same,” he notes. “My wife and I continue to support the arts and music and culture and the legacy of our people and our story. And when you see these kids work, you’ll just be amazed.”

Jonathan has come full circle. Through spirituality, faith and music, he has exorcised the demons of the past, while remaining open to reflecting on them, allowing himself to be immersed in a wide range of emotional experiences. He creates music that he hopes allows listeners to do the same.

“The way I like to approach making a record or working on a song: I like texture, I like space, I like beauty. And when I say space, I mean space so that you can actually experience something emotional or spiritual while you’re listening to it. And you have room to feel it and let it linger.”

That approach figures heavily on each track of Christmas Together, Jonathan notes, as he points to a few of his favorite tracks on the album:

“Joy to the World” – Spotlighting saxophone legend Dave Koz on soprano, this Christmas classic is reinvented here with an expansive, breezy arrangement that can only be described as “uplifting.”

As Jonathan puts it: “When I first started approaching ‘Joy to the World,’ I had Dave in mind. Sheléa came in first and we sat down and did a background vocal part and we came up with ‘Joy to All the World,’ instead of ‘Joy to the World.’ Because there should be joy for everyone in the world, not just for some people. Then Dave came to my house and into my studio and he sat down and just nailed it. We wanted to capture that spiritual side of what the song really means. It really is uplifting and that’s how I wanted it to feel. When I’m working on music, I want it to move me, I want to feel like I would want to buy it.”

“We Three Kings” – Rick Braun’s muted trumpet and valve trombone infuses a smoky texture and late-night club feel to this polyrhythmic take on this holiday favorite.

“As I’m getting older, I’m starting to tap into my roots and tap into the rhythms that I grew up with. And 6/8 is a rhythm I grew up with in South Africa. In every African musical experience, you will hear 6/8 rhythm come out. Once I locked into the rhythm of what my nation is about, I then began to hear the bass line and I began to hear the whole thing in my head. My wife said, ‘Try and make it like it’s a live gig, like you’re in a club and you’ve got these guys with you and you all are jamming’.”