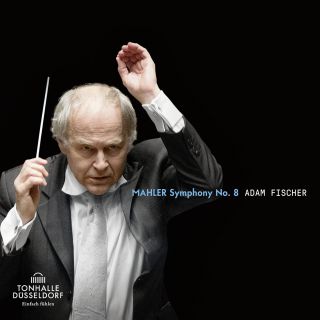 - The series of the complete Mahler Symphonies with the Düsseldorf Symphonic under the baton Ádám Fischer gets completer with the release of the Symphony No. 8 “The Symphony of the Thousends”

- Over the last two year Ádám Fischer’s Mahler recordings grew to a most successful recording project, winning the BBC Music Magazine Award, and the OPUS KLASSIK Trophy in Germany.

- The No. 8 is certainly the most enlarged project with three major choirs, Youth choir and eight soloists in the classical repertoire. There were records of more than 500 artists at the premiere performance 1910. In his live recording you listen to ca. 260 artists.

Mahler’s Eighth is a special challenge for all participants: in rehearsals, in performance, and, of course, when making a recording. The challenge lies in freeing the music from all of the technical and

logistical problems that come with it. Whenever new possibilities emerged in music history (such as new musical instruments), composers tended to introduce the novelty quite frequently in the first phase to show its potential. A good example was the Mannheim School in the 1700s.

The crescendo had just been invented: musicians no longer had to play dynamics in “terraced levels”. Mannheim pieces from that period are thus brimming with crescendos: musicians reveled in the new possibilities. Mahler, later on, wanted to explore the possibilities of an orchestra of unprecedented size, particularly in the Eighth. The effects made possible by such an enlargement should not become an end in themselves. That is the special challenge we have faced. If on this recording we have over 500 people singing and playing together, that is only a means, not an end.………..

At the beginning of the 2015/16 season, Adam Fischer was appointed Principal Conductor of the
Düsseldorfer Symphoniker and Artistic Consultant of the Düsseldorf Tonhalle. He is also Honorary
Conductor of the Austrian-Hungarian Haydn Orchestra, founder of the Eisenstadt Haydn Festival, and
founder and director of the Wagner Festival in Budapest.

Well-known for his courageous political commitment,
Adam Fischer has spoken out often in favor of human rights. Together with András Schiff he initiated
and signed a petition against racism and discrimination, which they submitted to the European Union.
Born in 1949 in Budapest, Adam Fischer studied composition and conducting in the Hungarian
capital, and with professor Hans Swarowsky in Vienna.

Fischer’s award-winning CD releases include the complete symphonic works of Haydn (distinguished
with the German national prize “Echo Klassik”) as well as of Mozart. He has also been awarded the Grand
Prix du Disque twice: for his recordings of Die Königin von Saba (Goldmark) and of Bluebeard’s
Castle (Bartók). In 2017, Adam Fischer was named Honorary Member of Vienna State Opera.


Düsseldorfer Symphoniker
“An orchestra for Düsseldorf ”: that is the objective and the high standard that the Düsseldorfer
Symphoniker set for themselves – 250 times a year. This orchestra has an uncommon profile, since it
performs not only in the Tonhalle, but also for the Deutsche Oper am Rhein in Düsseldorf and in
Duisburg. On its regular tours to Holland, Austria, China and Japan, the orchestra carries Düsseldorf ’s
reputation as a city of culture out into the world.

Already in the 1700’s, internationally celebrated artists such as Handel and Corelli collaborated on
occasion with the “Düsseldorf Court Orchestra” until the court was dissolved. A century later, in
1818, orchestral culture was re-introduced into Düsseldorf when the Municipal Music Society
(Städtischer Musikverein) was founded, attracting celebrated musicians of the likes of Mendelssohn
and Schumann to serve as conductors. The orchestra became truly “municipal” in 1864, and after
Aachen it is thus the second oldest civic orchestra in Germany.

Throughout the following decades it
became one of the leading and largest orchestras in the country. Its conductors in the postwar era have
been Heinrich Hollreiser, Eugen Szenkar, Jean Martinon, Rafael Frühbeck de Burgos, Henryk Czyz,
Willem van Otterloo, Bernhard Klee, David Shallon, Salvador Mas Conde, John Fiore and Andrey
Boreyko. Starting in the 2015 season, Adam Fischer has taken up the post of Principal Conductor.

The orchestra went on tour to Spain in 2011, guested at the Beethoven Easter Festival in Warsaw in
2012, and enjoyed resounding success in Moscow that same year. In 2014, the Düsseldorfer Symphoniker
gave a superb début performance at the Musikverein in Vienna, and were likewise well-received at
the Concertgebouw in Amsterdam.

In May 2015 they made nine acclaimed appearances in Tokyo.
In 2017 the orchestra was invited to open the new concert hall in Arnheim, guested in Moscow and
played again at the Concertgebouw in Amsterdam. 2018/19 the orchestra was guest in Budapest
and played a tour in Spain.