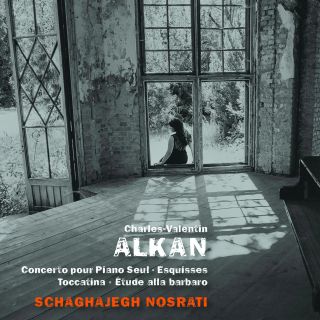 - Charles-Valentin Alkan is fairly unknown within the recorded repertoire, mainly piano music
- A contemporary of Richard Wagner, Franz Liszt and Frédéric Chopin in the 19th century but mostly living in Paris and enjoying the life in the salons
- His reluctance to celebrate great success, withdrawing more and more from the society live, has led to forget this fabulous musician

„I started to become fascinated …..“
Schaghajegh Nosrati on her encounters with Charles-Valentin Alkan. I started to become fascinated with composer Charles Valentin Alkan when I was very young. The groundwork was laid by my teacher Rainer M. Klaas, whose curiosity and commitment in favor of a seldom-performed and unjustly forgotten repertoire I still regard as an unrivaled source of inspiration. Klaas played a decisive role. At a time when few had ever listened to Alkan’s music or had even heard the composer’s name, I had already assimilated and learned to appreciate many of Alkan’s works thanks to his teaching. My brother Shafagh had also cultivated an interest in Alkan and performed several of his pieces. I found a further source of inspiration in pianist Marc-André
Hamelin, who recorded Alkan’s piano music in an unprecedented quality and helped make them known to a much wider audience.

Apart from my intense exploration of the music of J. S. Bach, I also began to learn and perform compositions by Alkan when I was still quite young………
Last not least, Alkan’s music is at times so unconventional and sarcastic that audiences may have experienced more irritation than enthusiasm. His style feeds on abrupt contrast; it features a great deal of counterpoint and is thus more akin to the so-called “German School” than to French salon music. Even today, Alkan’s music poses great challenges to listeners and performers, but I find those barriers by no means impossible to overcome. Anyone who dares to explore Alkan’s music more closely will be richly rewarded: these are works capable of displaying the utter extremes of the human
condition alongside one another: seriousness and humor, intellect and emotion, tradition and modernity. “

Born and raised in Bochum, pianist Schaghajegh Nosrati has enjoyed a solo career marked not only
by major prizes at international competitions, but also by a great number of successful concert
performances and tours. Her international breakthrough came in 2014 when she won Second Prize
at the renowned International Bach Competition in Leipzig, and particularly through her increasing
musical collaboration with Sir András Schiff, who has praised the “astounding clarity, purity, and
maturity” of her Bach interpretations and the musical insight she displays therein.

After many years of working with Rainer M. Klaas, Schaghajegh Nosrati was admitted in 2007 as a
young student to the class of Einar Steen-Nökleberg at Hanover University of Music, Drama and Media.
In 2015 she completed her Master’s Degree under Christopher Oakden, and her Artist Diploma with
Ewa Kupiec in 2017. Sir András Schiff, Robert Levin, Murray Perahia and Daniel Barenboim have
provided her with further artistic counsel and inspiration.
Ever since 1998, Nosrati has been regularly invited to perform at international music festivals such
as Düsseldorf, Gstaad and Lucerne. She played in the famous concert halls of Frankfurt, Leipzig,
Berlin, Bonn, Zurich, Vancouver, New York and many more. In 2017 she went on tour to China, inclusive
highly acclaimed concerts in Beijing and Shanghai.

Furthermore, she was invited to play a concert tour with Sir András Schiff and the Capella Andrea Barca
Chamber Orchestra in 2018. They performed together in Dortmund (Konzerthaus), Düsseldorf (Tonhalle),
Brussels (Palais des Beaux-Arts), Vienna (Musikverein), Bratislava (Philharmonic Concert Hall), Lucerne
(KKL), and Hamburg (Elbphilharmonie). Highlights of Schaghajegh Nosrati’s 2020/21 concert season shall
include début appearances at Wigmore Hall in London and at Carnegie Hall in New York.

Her two previous CDs were released to critical acclaim by Genuin Classics in 2015 and 2017: J. S. Bach’s
Art of Fugue, and Keyboard Concertos BWV 1052-1054 with the Deutsches Kammerorchester Berlin.
Schaghajegh Nosrati has been on the faculty of the Hanover University of Music, Drama and Media
since October 2015. www.nosrati-pianist.com