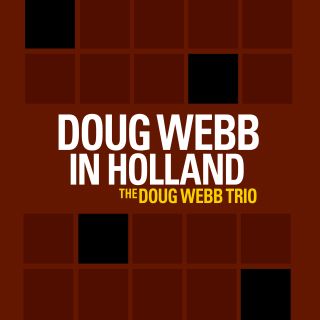 Catalog number: DBCHR 75228
Releasedate: 01-11-19
- Doug Webb has played and recorded with legends such as Horace Silver, Freddie Hubbard, Sal Marquez, Stanley Clarke, Mat Marucci, Kyle Eastwood, Billy Childs, Rod Stewart and Carly Simon.
- A major saxophonist for decades who has mastered virtually every reed instrument from sopranino to contrabass sax and all types of flutes and clarinets, Doug Webb is best known for his tenor playing, which is featured on this recording
- A selection of songs by great players such as Cole Porter and Lee Konitz, complimented by Webb's own compositions

A major saxophonist for decades who has mastered virtually every reed instrument from sopranino to contrabass sax and all types of flutes and clarinets, Doug Webb is best known for his tenor playing. He has appeared in a countless number of settings, working with Horace Silver, Freddie Hubbard, Stanley Clarke, Quincy Jones, the Doc Severinsen Big Band and as a long standing member of the Bill Holman Orchestra, in addition to recording for hundreds of films and television programs. But to hear him at his best, listen to Doug Webb with small jazz combos where he can really stretch out, such as the one featured on this release.

In 2015, Doug Webb toured Holland with veteran pianist Rein de Graaff’s trio which included bassist Marius Beets and drummer Eric Ineke. “We did an extensive tour,” remembers Doug, “something like 13 concerts in 14 days. In 2018 I returned to play a gig, pick up a contra alto flute and a subcontrabass flute from world renowned flute maker Eva Kingma and record with Marius and Eric.”

Playing with a pianoless trio presents some challenges that Doug Webb clearly enjoys. “I always like playing in this type of trio, I have much more freedom than in a larger group and I can play with a lot more energy to fill in the space. In college I played in pianoless trios all of the time and a big influence at the time was George Garzone and his group The Fringe. Eric Ineke is a great swinging drummer, while Marius Beets is a wonderful bass player who adds a great deal to the music.” Ineke, who has worked with Rein de Graaff for 35 years, has recorded along the way with such notables as Dave Liebman, Al Cohn, Barry Harris, George Coleman, Dexter Gordon and Ben Webster. He leads the Eric Ineke JazzXpress, which has made many recordings for the Daybreak label. Marius Beets played with his siblings as the Beets Brothers and has worked with Rita Reys, Johnny Griffin, James Moody, Gary Bartz, Deborah Brown, Houston Person, Dave Liebman and many Dutch groups including the Metropole Orchestra and his own Powerhouse Big Band.

Doug Webb In Holland was recorded in three and a half hours, with nearly all of the released selections being the first take. “This album has standards, bebop tunes and a few originals that are mostly based on familiar chord changes. I simply picked out good tunes, many of which I had not recorded before.”

Doug Webb (born 1960) is an American musician.  Webb was born in Chicago and moved to California at the age of 3. He is a graduate of Edison High School[2] in Huntington Beach, California, and received his Bachelor of Music from Berklee College of Music in Boston, Massachusetts. He began playing the clarinet at the age of 8, adding the saxophone and flute by 15. He lives in Los Angeles with his wife Alex.

He has played and recorded with such notable talents as Horace Silver, Freddie Hubbard, Sal Marquez, Stanley Clarke, Mat Marucci, Kyle Eastwood, Billy Childs, Rod Stewart, Carly Simon, Art Davis. He played with the house band for the Dennis Miller TV show, and toured with the Doc Severinsen big band.He has recorded music for hundreds of movies and television programs, including playing the saxophone of Lisa in the popular television show The Simpsons. He solos on the sound track for Mystic River and Million Dollar Baby. Webb has been featured on over 150 jazz recordings, including 20 under his own name, or as co-leader, for Posi-Tone Records.
Source: Wikipedia