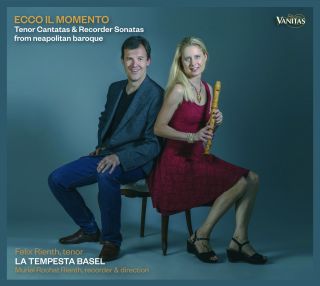 Catalog number: VA 13
Releasedate: 06-12-19
- An intriguing album intertwining Tenor Cantatas and Recorder Sonatas
- The music comes from the highest time in Italian Baroque
Exactly 10 years ago our baroque ensemble (the Berlin ORPHEUS-Opera Magazine called La Tempesta Basel “small, but delightful”) presented its first CD. We began our CD-adventure with the Spanish label Enchiriadis (Madrid), featuring the English cantatas and recorder sonatas by Händel contemporary Johann Christoph Pepusch, which not only brought us a lot of attention but also the highest international praise. This debut album was radio broadcast in many countries, with some reviews comparing the Pepusch-Sonatas with those of the many times more famous Händel. Perhaps this motivated my wife, Muriel Rochat Rienth, to record Händel’s recorder sonatas some years later, this time for the VANITAS label.

The second Tempesta CD (2014) consisted of a Hamburg programme, including Telemann’s church cantatas from the Harmonischer Gottesdienst, in German, and a selection of recorder sonatas. With the master hornist Thomas Müller and Concerto Köln-bassoonist Yves Bertin on board, this CD became a beautiful success too. In Spain it was nominated as one of the top 10 CDs of the month, and it also earned the highest accolades in the USA. And again, inspired by the master from Magdeburg, at the end of 2016 Muriel Rochat Rienth recorded Telemann’s 12 Fantasias for Solo Flute with VANITAS.

In 2019 we are presenting La Tempesta Basel’s third recording. By the way, the name of the ensemble derives from Vivaldi’s famous flute concert, La Tempesta Di Mare. The programme is in Italian, including a world-first recording of a work by Giovanni Fischietti. Our harpsichordist Norberto Broggini (an original member of La Tempesta Basel), found the facsimile some years ago in a private library. Based on his photos Muriel Rochat Rienth produced her own transcription, and in 2012 La Tempesta Basel premiered the cantata in Fribourg (Switzerland).

For this CD La Tempesta Basel is collaborating for the first time with the Spanish label VANITAS.


FELIX RIENTH, tenor
The Swiss tenor with Spanish mother performed at major festivals, like Ambronay, Paris, Ghent, Lisbon, Granada and recorded about 20 CDs, to mention specially spanish baroque songs Tonos humanos by José Marín, considered as a "reference recording" by german magazine "Klassik heute". He has sung as a soloist the grand oratorios all over Europe: Requiem by Mozart with the Mozarteum Orchestra in Salzburg, Masses by Schubert with the Suisse Romande Orchestra, Lobgesang by Mendelssohn at Kölner Philharmonie, Elias in Lisbon as well as St. John's Passion by Bach in Holland and Austria with the "Orchestra of the 18th century", conducted by Frans Brüggen.
www.felixrienth.com


The baroque ensemble La Tempesta Basel, awarded with the swiss ORPHEUS-prize, realized among numerous concerts in Europe, two very succesful CDs by Pepusch and Telemann, regularly broadcasted by different Radios in Switzerland, Germany, Belgium, Holland, Spain, Canada and Australia (ABC Classics). This present CD ist the third disc of la Tempesta Basel in a period of 10 years.
On this disc you can listen also to french celllo player Mathieu Rouquié and, as a soloist,  to regular harpsichordist  Norberto Broggini ( continuo player from „Ensemble Elyma“) with Fago’s „Toccata“.
www.latempestabasel.com