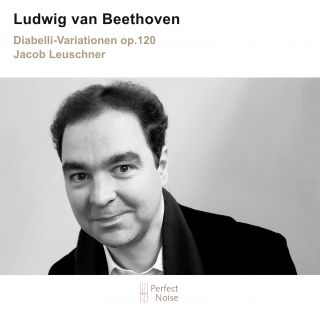 - new recording considering all the newest editorial changes
- recording in the wonderful and famous acoustic of the Reitstadel Neumarkt
- very clear interpretation of a complex work, makes it easier to understand

Even today, exactly two hundred years after the beginning of their creation, the "Diabelli Variations" still have a reputation among many concertgoers and organisers as being "awkward" or "unwieldy" and, in any case, difficult to understand. Jacob Leuschner proves the opposite.

Indeed, it is not an immediately accessible piece, let alone one that ingratiates itself the first time you hear it; like most of Beethoven's later works, it requires intense, concentrated engagement before it reveals its complex beauty.

Jacob Leuschner, piano
born in Freiburg in 1 974, studied in Freiburg and Lübeck. His most important teachers
were Helmut Barth, Michel Béroff, Konrad Elser and Leonard Hokanson.

Since 1 989, he has performed as a soloist and sought-after chamber musician in many
European countries, Japan, South Korea, China and the USA, and has been invited to
numerous international festivals. He has been a regular participant in the funding project
"Bundesauswahl Konzerte Junger Künstler" (Federal Selection Concerts Young
Artists)held by Deutscher Musikrat.
The awards he has won at major piano competitions testify to his artistic stature: Viotti
(Vercelli), Beethoven (Vienna), Schubert (Dortmund), Mozart (Salzburg), Leeds, Rina
Sala Gallo (Monza), Deutscher Musikwettbewerb, Deutscher Hochschulwettbewerb – to
name just the most important ones.
He is also the recipient of the Possehl Music Prize, the Kai-Uwe von Hassel Prize and
the Wiesbaden Mozart Prize.
Jacob Leuschner taught at the University of Music Lübeck, and was a Visiting Professor
at the University of Music FRANZ LISZT in Weimar. From 2008 to 201 4, he held a
professorship at the University of Music in Cologne, and then followed a call to join the
University of Music in Detmold. He regularly gives masterclasses in many European
countries, Japan, China and Korea.
His repertoire ranges from the Virginalists to the present; one focus is the masters of
Viennese classical music. He has performed the complete cycles of Mozart’s,
Beethoven’s and Schubert’s piano sonatas at several occasions.
He also works as a juror at international piano competitions and as a publisher, and has
dealt intensively with historical keyboard instruments. He is the founder and artistic
director of the Brahms Piano Competition in Detmold.
His discography includes not only numerous chamber music pieces, such as the
complete works for cello and piano by Reger with Guido Schiefen (Oehms Classics), but
also the late Beethoven sonatas and Liszt transcriptions. In addition to two solo CDs, he
released a complete recording of Mozart's sonatas for piano and violin in 201 7 with
violinist Keiko Urushihara (Nippon Acoustic Records), which was met with enthusiasm by
the Japanese trade press and awarded the "Excellence Award" by the Japanese State
Office for Culture.
Today, Jacob Leuschner is one of the most distinguished and versatile German pianists
of his generation.