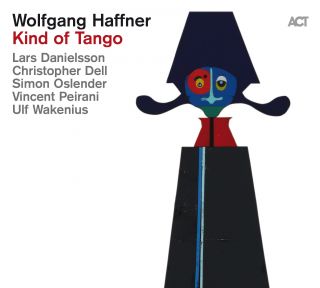 Catalog number: ACTLP 98991
Releasedate: 28-02-20
- Available as CD and LP
“This isn’t about reproducing an original, it’s much more like a translation. When I absorb and adapt influences and when I write, I follow my own path – and that allows me to be myself. It’s a process from which something new and contemporary can emerge.” This is how Wolfgang Haffner describes the artistic approach in his “Kind of...” album trilogy, all of which have the unmistakable Haffner sound running right through them. After a first adventure in cool jazz, and then a search for musical traditions in Spain, his new destination is Buenos Aires: “From the moment Siggi Loch suggested tango as my third point of departure, I didn’t need any more convincing. Rhythm is the essence of tango, plus catchy melodies which can then be developed – and there’s so much emotion in it too.”

“Kind of Tango” is indeed a kaleidoscope of shifting emotions. Haffner’s conception of tango has drama and propulsion in it, but also melancholy and longing, with room for frenetic outbursts too. All this is unified by his inimitable groove and feel that commentators have called “an absolute dream”, “magical” and “profoundly relaxed”. Alongside trusted co-protagonists Christopher Dell and Lars Danielsson, he has two guests with him who defy all the clichés associated with tango: guitarist Ulf Wakenius cut his teeth musically in Oscar Peterson’s band, and his Swedish heritage always shines through in his playing. Vincent Peirani is one of the leading innovators on the accordion, and he finds new ways to define the instrument’s role in the tango. Young pianist Simon Oslender is making a first appearance with the band.

Jazz and tango find a natural yet constantly shifting equilibrium – to be heard particularly effectively on “Close Your Eyes And Listen” by Astor Piazzolla. In addition to compositions by Haffner himself and by his band members, pieces by the celebrated Argentinian bandoneon player and composer are the focal point of the album. Piazzolla’s innovations with the tango, such as bringing jazz into it, date from around 1955. Haffner and the tango seem perfectly matched to each other. Tango is no longer a fixed style nowadays, it is above all an attitude to playing and an attitude to life. Wolfgang Haffner’s approach to tango is both authentic and new. It is his and his alone. And it is irresistible.

German commentators unhesitatingly  – and understandably – reach for the superlatives when they describe Wolfgang Haffner. He is the country’s "best drummer" (Die Welt), also the "coolest" (ARD ttt), and the "most important drummer of his generation" (Süddeutsche Zeitung).
Haffner was born in 1965 and his career started to take shape from an early age. At 18, Albert Mangelsdorff recruited him as a member of his band. As a result he got to play not only with the top flight of German jazz musicians from all generations – from Klaus Doldinger to Till Brönner to Michael Wollny – but he has also been one of the very few Germans to have known international success: US stars like Pat Metheny, Randy and Michael Brecker, Chuck Loeb and John Abercrombie have come to place their trust in his infallible sense of forward propulsion and in the inspiration that his creativity brings, just as top Scandinavians such as Nils Landgren and Lars Danielsson have as well. Because of his extremely powerful and dynamic playing, Haffner is also one of the most sought-after sidemen for rock and pop stars like Chaka Khan, the Fantastic Four, and even Nightmares on Wax.

Haffner shares one trait with many of the very best in his field, in that was never satisfied with just drumming. It was not long before he had started composing and producing as well. And he also got his own projects off the ground: the albums which Haffner has released under his own name now make him one of the most successful jazz musicians and bandleaders in Germany.

Wolfgang Haffner is a past master when it comes to atmosphere, groove and flow. His unmistakable feeling for the sublime in music and his ability to create mood and atmosphere are what set his music apart. He has found his own personal style, and as a bandleader he has evolved the typical Haffner sound which is immediately recognizable after just a few bars.

Haffner has also built a substantial track record and reputation as a producer for bands such as Mezzoforte and singer Max Mutzke. His playing can be heard on over 400 albums; he has played at the most important jazz festivals in the world and has toured in 100 countries, from Japan to the USA, from South Africa to Brazil.