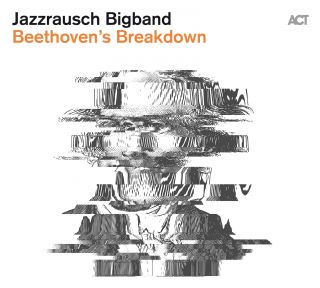 Piano Sonata No. 14 in C sharp minor Op. 27 No. 2 ‘Moonlight’
The Moonlight Sonata is among Beethoven’s most popular works. Wind instruments such as contrabass clarinet and soprano saxophone are utilized within the arrangement like a synthesizer, allowing for the arpeggio lines to sit prominently within the foreground of the piece in the style of a Stephan Bodzin techno track. The melody itself is cleverly displaced within minimal trumpet interjections.

Symphony No. 7 in A major Op. 92 – II, Allegretto
The second movement of Beethoven’s Seventh Symphony has a long tradition of jazz adaptions. The theme here doesn’t sound at all as subtle and delicate as in the original symphony, but instead provokes a robust and powerful statement arranged as pounding contrabass clarinet and tuba lines.

Sonata in Fm I – IV (composed by Leonhard Kuhn)
An artist that is confident enough to take on Beethoven and his penchant for thematic, romantic music will inevitably want to introduce elements that feel personal and modern. Regarding the form and harmonies, the sonata is strongly reminiscent of Beethoven. The melodies and the sonic aesthetic however, make use of a contemporary language that involves both the spectral music of Tristan Murail and the danceable grooves of house music. From Leonhard Kuhn’s very personal artistic vision, the sonata is not only a tribute to Beethoven's work, it also serves as commentary on its continued significance to musicians and listeners alike, today.

String Quartet No. 14 in C sharp minor Op. 131
Melodic fragments from one of Beethoven’s late string quartets are harmonically reinterpreted to the point of being almost unidentifiable in this arrangement, leading the listener to believe they may be listening to an entirely new composition. This multi-faceted reworked piece encapsulates classical elements as well as dark German techno à la Ben Klock or Rødhåd.

ith an average of 120 concerts a year, troughout Europe and visiting America, Asia and Africa, the Jazzrausch Bigband is one of the busiest bigbands of Europe. With "power, groove and enormous stage presence" (Frankfurter Allgemeine Zeitung), the band equally reaches audiences from jazz and electronic music.

The driving forces behind the Jazzrausch Bigband project are the Munich-based trombonist and music manager Roman Sladek and the guitarist and composer Leonhard Kuhn, also living in Munich. The nucleus and starting point of the musical journey is a Munich institution: the "Harry Klein", one of the most renowned electro clubs in Europe. In 2015, just one year after its founding, JRBB became artist in residence at the club - and the young Munich audience went nuts. A big band in the Techno Club! Totally unique! For Munich and the world! Soon, the stages are getting bigger, the band is selling out rock venues like the Munich Muffathalle, as well as classical music temples like the Munich Philharmonic and is performing at major festivals all over Germany. Tours soon take them to the Lincoln Center in New York, the JZ Festival in Shanghai, the Safaricom International Jazz Festival in Nairobi, the Ural Music Night in Yekaterinburg and the SXSW Music Festival in Austin and others.

So it's not an exaggeration to call the Jazzrausch Bigband a phenomenon. One that shows in a very own way, what has been simmering and bubbling for a long time in this genre called "jazz": today, more than ever before, it is a category for all that does not fit into categories. And everybody, the musicians as well as the audience, enjoy tearing down musical boundaries of all kinds. In this context, the music of JRBB seems to fulfill various longings: The desires of the dance audience for more genuine, handmade, fresh, original music. And those of the jazz and classical listeners to more groove, big sound and great fun.