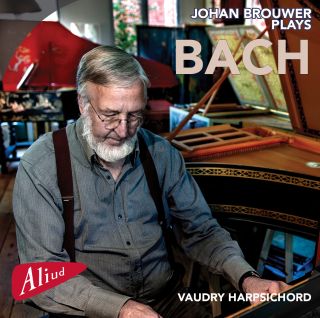 Catalog number: ACDOH 1102
Releasedate: 27-03-20
- Johan Brouwer studiet by Gustav Leonhard and is an expert in the music by Johann Sebastian Bach.
- He is playing all over the world and his concerts are very well being visited by the audience.
The programme of this CD is entirely devoted to the harpsichord music of Johann Sebastian Bach (1685-1750), played on a precious Vaudry instrument. Two pieces were recorded earlier, but on different instruments, a Taskin (1669/1979) and a Giusti (1679/1977).
Johan Brouwer (1943) studied organ under Wim van Beek and music theory under Frans van Eeden at the Groningen conservatory, then harpsichord at the Amsterdam conservatory. After his soloist exam he took up further studies with Gustav Leonhardt. Johan Brouwer followed masterclasses by Ton Koopman, René Saorgin and Jos van Immerseel. Johan Brouwer has given concerts in the Netherlands, France, Sweden, Portugal, England and Germany and as leader/harpsichordist formed part of the Groningen baroque orchestra Collegium Musicum, concentrating not just on the great traditional works of the baroque but also on unknown work from the 17th and 18th centuries. He also worked for a long time as conductor of the Winschoten Chamber Choir, with which he performed much 17th century music together with the Collegium Musicum Groningen. Johan Brouwer has made various CDs, including a CD with his collection of harpsichords, built by David Rubio, a CD with radio recordings from ’73 and ’83 made by the NCRV on the Hinsz organs of Midwolda and Appingedam and 2 CDs in the book ‘35 Years of Collegium Musicum Groningen’, in which he can be heard as continuo player and conductor. 2012 saw the release of a CD in which works are played on the famous Arp Schnitger positiv (1695) in Nieuw-Scheemda and on his Italian harpsichord, built by David Rubio (1977) after Giovanni Giusti (1679). In 2014 there is a release of a new CD ‘Bach and the French baroque’. 2016 saw the release of my CD played on my copy of the Jean Vaudry harpsichord (1681) with Bach and French music