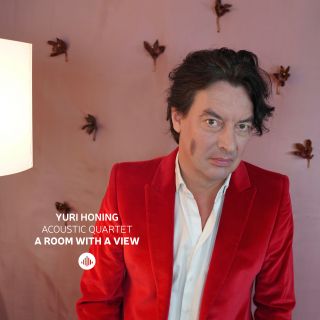 A Room With a View (single)

The relentless Bluebeard now has a soundtrack thanks to Dutch saxophone pride Yuri Honing. Yuri Honing dedicated his new album to the gruesome heritage of Bluebeard, title character of the 17thcentury French fairytale. The duke with the seven wives symbolizes other historic European figures. For example, Pablo Picasso, who conquered women and loved them, but also destroyed them; all these phases inspired his art. A sonnet by the first female Pullitzer Prize winner, Edna Millay, a variation on the fairytale, forms the basis of the album Bluebeard. With his Acoustic Quartet, Yuri Honing has been celebrating international success for many years. As with his previous album Goldbrun, the release of Bluebeard will be followed by an exhibition at Museum De Fundatie in Zwolle, a ‘Gesamtkunstwerk’ of paintings, sculptures and music in collaboration with painter Mariecke van der Linden. Honing’s awards include three Edisons and the Boy Edgar Prijs 2012, and he has worked with countless greats such as Pat Metheny, Charlie Haden, Kurt Rosenwinkel, Paul Bley and Craig Taborn.
Honing had his first major success in 1996 with his album Star Tracks, which comprised recordings of pop songs as an alternative to the American Songbook. The album became a hit in the Netherlands and Germany, and gained significant notice in the UK as well. The album contains songs by Abba and The Police among others. Honing uses their material as a basis for improvisation; he gladly points out that jazz musicians of previous generations were doing exactly the same. The album Sequel that Honing records in 1999 is in the same vein, using material by Björk, Blondie and others.
The CD Playing (1998) finds Honing performing alongside veteran pianist Misha Mengelberg in twelve freely improvised tracks. Two years later the project gets a sequel at the North Sea Jazz Festival, with cellist Ernst Reijseger as third improviser. The recordings find their way onto the CD Lively (2000).