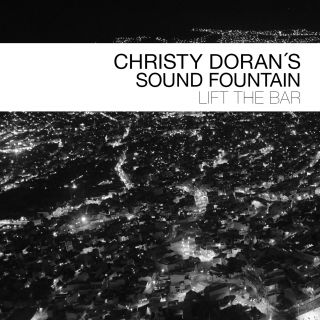 ... Wild stuff that’s not for everyone but is a new gold standard for those that like to boldly go where no one has gone before.  It’s on the corner of where prog jazz meets prog rock... Chris Spector, Midwest Record

Philadelphia’s Rave Musical Bar, where he played a few evenings, marked Coltrane’s time around 1957, when he found his sound through Monk and his ecstatic play began to reach its artistic heights in ever longer solos. After the cult quartet OM, named after an album title of Coltrane’s, Christy Doran pays homage to the titan once again. After stopped teaching, he deliberately raised the bar for his own work, while successfully dedicating himself to the music of another immortal star, Hendrix, since 1993: neither adulating nor imitating and with different line-ups.

The Irish-born citizen of Lucerne begins the title track almost in a similar way to Western music, but then it draws its characteristic lines immediately over the rocky groove of the wonderful Argentine bassist Franco Fontanarrosa and the precise driving beats of Lukas Mantel. Doran’s guitar alternates between irregular riffs and flat contrasts, between memorable melodies, repetitive patterns and trashy, noisy bulkiness at the end of the coziness. A few harmonies, dramaturgically set exactly in the right place, fire the sound and let us sense it all the more intensely and urgently. It is music of today, Doran’s very own, long-known and yet always a surprising sound, captivating and astonishing: Rock music of the hour, rich in nuances like jazz, played by three musicians with feeling and stupendous technique. It is the fourth Sound Fountain album, one of which was recorded live in Guetersloh in the series “European Jazz Legends” – to which Christy Doran has long belonged.

But because of recurring differences and problems, Doran has now finally sent New Bag and possibly also the other amorous sidekicks out to pasture. In his 70th year of age, the guitarist now wants to immerse himself in a fountain of youth again, but in doing so he actually focuses all his creative power on a single project that he cares about more than many others before. No kidding! The dream band has long had a shining reputation: Sound Fountain, the collaboration that has existed since 2014 with Argentine bassist Franco Fontanarrosa and Lukas Mantel, one of the most innovative Swiss drummers. They are extremely close both in a human and musical sense, Christy Doran said. “It's incredibly fun to play and be with Franco and Lukas. A lot more is going to happen!” After the two celebrated live CDs “Belle Epoque” from 2015 (BTLCHR71242) and “Undercurrent” from 2017 (INTCHR 71326), this announcement can be taken literally. Their first album completely created in a studio, “For The Kick Of It”, was recorded in no man's land 200 kilometers beyond Cordoba and mixed by the legendary Australian sound master Aaron Mason.

Unmistakable: the numerous tours and concerts, among others in Argentina and China, have done Doran, Fontanarrosa and Mantel audibly well, bringing them together even more than ever before to form a closed, homogeneous, organic unit. Abundant drive, highly complicated meters, sudden or strangely searching topics, but also clearly driving body rhythms, atmospheric relaxation zones, theatrical actions, electronically supported howling and chuckling, small outbursts of violence, recitative near-standstill, short pretenses of tenderness, which arise in furious sound loops or seemingly free lyrical confusion, small sound paths that quietly put themselves in the corner: all of this is transformed on “For The Kick Of It” into spiritual, artistically brilliant entertainment, created in the midst of a highly artistic flow of ideas.

Even if it bears his name, “Christy Doran’s Sound Fountain is a collective,” which the restless spirit states unmistakably clearly on six strings. “All musicians compose for the band, I do it most, and all get gigs and tours. We are much closer to each other musically than was the case with my other bands. Everyone contributes his preferences. This creates a musically exciting and attractive program. Franco, Lukas and I all play with the same objectives on Sound Fountain.” That sounds like an equal partnership. And the complete, great love of one’s life.