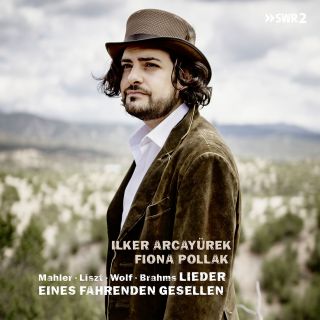 - First solo recording of ILKER ARCAYÜREK, Istanbul born tenor from Austria. He performs already at the major opera houses around this world and is well booked also for many Lieder recitals.
- He has chosen Mahler’s Lied cycle as the theme of his album, a journey through the recent Austro-Hungarian empire with songs of composers who lived or still live in this area.

SONGS OF A WAYFARER
"The International Art Song Competition held by the Hugo Wolf Academy in Stuttgart was the birthplace of this CD. During the competition, Fiona Pollak and I took a certain amount of musical risks and were ultimately rewarded with the First Prize, as well as with the opportunity to record this CD. We
thus extend our most heartfelt thanks to SWR, to CAvi-music, and to all the organizers for their trust and support!

This recording features songs by composers from the period of the kaiserlich-und-königlich Dual Monarchy of Austria-Hungary around the turn of the 20th century. We wanted to venture outside our comfort zone to discover as many different timbres and new songs as possible. We have selected composers from the Austro-Hungarian Empire of that time, including the region of Vojvodina, which is now part of Serbia.

The variety of art songs featured here not only reflects the Austro-Hungarian period, but also the Austria of today, along with each of our individual artistic personalities. We are two musicians with entirely different origins and religious backgrounds: Austria is where we met and started making music together.
Mahler’s Songs of a Wayfarer form this recording’s dramatic nucleus.We found it fascinating to present this cycle in a rarely performed higher version for tenor. In our view, the Songs of a Wayfarer serve here as a prologue, a foreshadowing, and a summing up of the content you will encounter in the
remaining songs on this CD. The wayfarer’s story begins with Frühlingsmorgen, a morning in spring. In Franz Léhar‘s two songs he discovers love for the first time. However, he undergoes his first emotional transformation, associated with the first heartache, in Hugo Wolf’s Der Mond hat eine schwere Klag’ erhoben (The moon has raised a grave complaint). From there we wander into the Balkan mountain range, to the Vojvodina region on the Danube. In Elegie the wayfarer expresses his pain and sorrow. Along with the change of mood, the language changes, as well. It comes with the heartfelt yearning to turn back time.

Childhood reminiscences emerge in the thoughts of the wayfarer, who by now has grown older. He returns to his homeland. A confrontation with death, along with a meditation upon its meaning, comes in the songs of Brahms, and Mahler. In the epilogue Ich bin der Welt abhanden gekommen (I am lost to the world), we come full circle. The wayfarer finally attains the inner peace for which he so yearned..." © 2019 Ilker Arcayürek

„We wanted to venture outside our comfort zone to discover as many different timbres and new songs as possible.“

Fiona Pollak was born in Vienna in 1986. She received her first piano lessons at Vienna Music School
at the age of five. In 1997 she was accepted as a young student into the organ class of Rudolf Scholz at
Vienna University of Music and the Performing Arts. At the same institution she specialized in piano
chamber music in the class of Avedis Kouyoumdjian from 2005 to 2007, and successfully concluded
her organ studies in 2010.
From 2012 to 2015, Fiona Pollak was the titular organist of the municipal parish church of Korneuburg
and curator of the Heiller organ. For the 2013/14 academic year she switched over to the class of
Graham Johnson at Guildhall School of Music and Drama in London. She went on studying vocal
accompaniment in the class of David Lutz at Vienna University of Music and the Performing Arts,
where she obtained her diploma in 2016, unanimously awarded summa cum laude by the jury.
Fiona Pollak was a prizewinner at the First International Competition for Voice and Organ in Neuss,
Germany. In tandem with her brother, tenor Angelo Pollak, she won First Prize at the Vocallis Festival
in Vaals/NL in 2014; soon thereafter, the duo won Third Prize at the International Song Duo Competition
in Enschede/NL.
In 2016 Fiona Pollak was awarded the Special Prize as Best Vocal Accompanist at the renowned
Robert Schumann Competition in Zwickau. That same year, with duo partner Ilker Arcayürek, she
was awarded First Prize at the International Art Song Competition in Stuttgart. Fiona Pollak teaches
solo piano and piano accompaniment at the Musikum Music School in Salzburg.
English Translation: Stanley Hanks