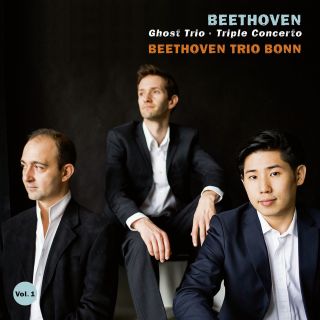 - Beethoven’s birthday is eminent, this record – Vol. 1 of a small 3 CD series, contains Trios by Beethoven – one original (Op. 70 No. 1 – Ghost trio) but also an arrangement of the Triple Concerto for piano trio
- Most of the music lovers of Beethoven’s time did not have the opportunity to go to a concert. Therefore either the composer himself, or an arranger to re-arrange works for bigger orchestra for a chamber music group for the folks to play the piece at home.
- The arranger of the triple concerto was a late Beethoven contemporary Friedrich Eduard Wilsing (1809-1893), famous for his arrangements.

In a series of 3 CDs, the Beethoven Trio Bonn explores the confrontation between one of Beethoven’s standard works for piano trio with a further “house music” arrangement of one of his orchestral works. More than providing an interesting pairing, the Beethoven Trio Bonn was keen on interpreting an original work for piano trio alongside an arrangement of an orchestral work “downsized” to piano trio format. This new concept delivers surprising, unforeseen results.

Composers and publishers in Beethoven’s day sought to indulge the pleasures of the middle class: dozens of arrangements and transcriptions of orchestral works were in wide circulation for domestic use. Haydn, Mozart and many others had always tried to provide access to the wonders of symphonic music for those members of the population who could not gain entrance to the grand concerts of the upper classes.

Up to the 1930s, music publishers continued to commission composers to arrange and transcribe symphonies and other orchestral works, in order to make them readily available as chamber music; no composer found the task too lowly, since such work was a good source of steady income.

When we hear Beethoven’s Triple Concerto performed by a piano trio, as on this CD, we are full of admiration for these three musicians who play all the additional orchestra notes apart from their own virtuoso solo parts. The piano has the toughest job of them all!

Still, the resulting blend is thoroughly satisfying. Beethoven’s Triple Concerto, arranged for piano trio by German composer Friedrich Eduard Wilsing (1909-1893), sounds entirely convincing; it still sports the same rhythmic drive as Beethoven’s original work – particularly thanks to BTB’s refreshing, energetic playing in an interpretation they have thought out with care.

The Beethoven Trio Bonn first made themselves a name with compositions by their eponym Beethoven
and other Romantic works, before more recently turning their attention to Russian repertoire. Mikhail
Ovrutsky (violin) and Grigory Alumyan (cello) are two of the founding members of this ambitious trio,
which in 2015 maintained and strengthened its tradition with the addition of pianist Jinsang Lee.
All three musicians are foremost in their instruments, have won major international awards, and
pursue successful solo careers.

The Beethoven Trio Bonn are one of the most interesting and highly profiled piano trios currently
performing. Since their inception in 2005, they have delighted audiences as well as national and
international music critics with their “highly expressive passion” (Kulturradio Berlin-Brandenburg)
and their “daring, yet convincing performances” (Bonner Rundschau).

The ensemble has recorded four highly praised CDs: Beethoven/Mendelssohn, 4x No. 1 (Arensky,
Shostakovich, Kapustin, Rachmaninoff), as well as world première performances of Russian composers
Alexander Alyabyev and Georgy Sviridov. All released on the CAvi-Music label, these recordings
have caused a sensation on the German and international music scene and have been nominated
for several distinctions, including the German Record Critics’ Award.

Guest performances have taken the musicians all around the world – for example, to South Africa,
Austria, Spain, Japan, and the US, and to renowned festivals including the Beethovenfest in Bonn. In
2018 and 2019 they performed at the Beethoven Night in Bonn, and on the occasion of the inauguration
of the Beethoven Jubilee Year exhibit at the Bundeskunsthalle.

At the International Telekom Beethoven
Competition the trio awarded its own sponsored prize, and they gave their début performance at the
Grands Interprètes Festival in Geneva. Upcoming appearances will take place all over Europe and in Korea.