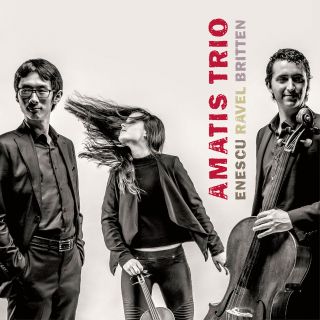 Catalog number: AVI 8553477
Releasedate: 03-04-20
- Debut Album of one of the most exciting Piano Trios from the last 6 years
- The three musicians met in Amsterdam, and have performed together in 34 countries around the world.
- Meanwhile the AMATIS TRIO is conquering the European continent as well as the Nord American continent by a huge amount of concerts and tours

"As a piano trio, we find it particularly interesting to discover music that is seldom recorded or performed. We enjoy the artistic challenge of interpreting such works using our own individual approach and it enables us to offer interesting and diverse programming. The idea of uncovering and recording lesser known pieces for our first CD led us to include a wonderful early work by George Enescu, his Trio No. 1, along with the youthful Benjamin Britten’s Introduction and Allegro. Finding our own voice with these scores, free from preconceived musical ideas or influences, is a process that inspires us. It is an exploration that we regard as an invaluable experience. Both Enescu and Britten found inspiration through Ravel’s music and this in turn led us to his Piano Trio in A minor, hailed as one of the great masterworks of the 20th century...."

The Amatis Trio was founded in Amsterdam in 2014 by German violinist Lea Hausmann, British cellist Samuel Shepherd, and Dutch/Chinese
pianist Mengjie Han. The three musicians met in Amsterdam, and have performed together in 34 countries around the world

Only weeks after its inception, the trio won the Audience Prize at the Grachtenfestival-Concours at the Royal Concertgebouw in Amsterdam,
and First Prize at the International Parkhouse Award at Wigmore Hall in London, both venues that now invite them as regular artists, and to
which they returned for their 2018/19 season as ECHO (European Concert Hall Organization) Rising Stars.

From 2016 to 2018, the Amatis Trio were selected by BBC Radio 3 to join the BBC New Generation Artists scheme; in 2018 they were invited
to participate in the Verbier Festival Academy in Switzerland. It has emerged as one of the leading piano trios of the new generation.
Their commitment to new music, to education projects, and to the bringing of Western music to less exposed audiences has most recently led
the trio to undertake performance tours in Indonesia and India, and to teach masterclasses in Jakarta, Bandung, Mumbai, and Pune.

Summer 2019 saw the Amatis Trio make their BBC Proms debut and perform as soloists in the Beethoven Triple Concerto with the Royal
Philharmonic Orchestra under the baton of Jamie Phillips at the 2019 Kings Lynn Festival. They made their 2019 Edinburgh International
Festival debut in a programme entitled Amatis Trio and Friends, where they invited two other members of the BBC NGA scheme to perform
with them. Both this concert and the BBC Proms appearance were broadcast live on BBC Radio 3