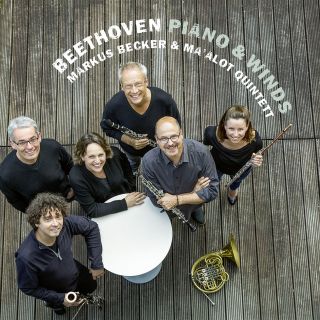 - Headline: The young Beethoven; all work as are written before 1800
- How many works for Piano & Winds did Beethoven write? Only one original (Op. 16), the E flat major concerto and the four pieces for mechanical clock are arrangements, originally written by Beethoven.
- Markus Becker is proving to be a very idiomatic Beethoven player as well the world travelled wind quintet Ma’a lot.

HOW MANY PIECES BEETHOVEN WROTE FOR PIANO AND WINDS?
THE YOUNG BEETHOVEN
One can easily find a great number of outstanding chamber music works for string instruments; on the other hand, chamber music repertoire for woodwinds on a similar high level of composition is relatively sparse. By the 1800s, string instruments and the piano had achieved a high standard in terms of playing technique and construction; wind instruments, however, lagged somewhat behind.

Woodwinds still sounded uneven across their registers and suffered from technical constraints, including limitations in terms of musical keys: all of this must have exerted a counterproductive influence on a generation of Romantic composers who wanted to expand music’s horizons in terms of dynamics and harmony.

The Ma’alot Wind Quintet has teamed up on this CD with pianist Markus Becker in works by Ludwig van Beethoven for piano and woodwinds, supplemented by several of Beethoven’s charming works for flute-playing clock, arranged by clarinetist Ulf-Guido Schäfer for woodwind quintet.

The main raison-d’être for this choice of program lies in the fact that Beethoven himself composed an excellent large-scale original work for four woodwinds (oboe, clarinet, horn, and bassoon) and piano – a work which, in terms of musical proportions and compositional ingenuity, rose far above the standard of what was otherwise being written for winds at the time when it was premiered (1796).

That original composition is coupled on this CD with another work by Beethoven for which we no longer have the original instrumentation, but which can be reconstructed, thanks to a series of circumstances, to a point of departure from which Ulf-Guido Schäfer has been able to arrange it as a chamber-music Concerto for piano and wind quintet. (from Booklet Notes by Andreas N. Tarkmann)

Born in 1963 in Osnabrück, Markus Becker has convinced audiences and critics alike as a highly
formative interpreter of piano literature from Bach to Rihm, an eminent artist on the international
scale who is noted for his original programming choices. Exceptionally among classical pianists, he
also stands out as a virtuoso jazz improviser.

He studied with Prof. Karl-Heinz Kämmerling and received
additional crucial guidance for many years from Alfred Brendel. Since 1993, he has been a professor at
the Hanover Academy of Music, Theatre and Media, where he supervises a class of pianists and chamber
ensembles, oversees the Masters Degree department, and directs the Chamber Music Institute.

With his CD recordings, Becker is the three-time winner of the ECHO-Klassik award as well as the
German Critics Choice Award, along with a number of further distinctions from the international music
press (Gramophone, Fono Forum, Klassik Heute, BBC Music Magazine, American Record Guide).
Becker‘s recording of Max Reger’s complete piano works on 12 CDs (Thorofon) is already considered
legendary.

Fono Forum‘s assessment of this encyclopaedic feat: “One of the rare and truly major
achievements of German piano artistry in the past 50 years.” He received an OPUS award for his
live recorded Reger piano concerto.
www.markusbecker-pianist.de

Founded in 1986, the Ma’alot Quintet is one of the world’s leading chamber music ensembles. First

After winning the renowned ARD Munich Competition in 1989, the Ma’alot Quintet went on tour
throughout Europe, to South Korea, the US, South America, and Southeast Asia. The ensemble’s
repertoire embraces music from the classical period to the avantgarde. The unique and wonderful
arrangements of the ensemble’s clarinetist Ulf-Guido Schäfer are perfectly written for the quintet
and are almost completely featured on their CD recordings.

Ma’alot’s long term collaboration with the Dabringhaus & Grimm label (MDG), has led to numerous
prestigious award-winning recordings, including two coveted German Echo Klassik prizes in 2006
and 2010 for their Dvoˇrák and Rossini CD’s.

The members of the quintet are principal solo players or professors in some of the world’s leading
orchestras and music academies. In their search for new ideas and their passion for modern music,
they have created dynamic relationships with contemporary composers: thus, the ensemble has
premièred a number of works and has conceived new, experimental recital forms. Artists with whom
they have had close artistic relationships include the composer Detlef Glanert, the actor Dominique
Horwitz, the tenor Christoph Prégardien, and the pianist Markus Becker.
www.maalot-quintett.de