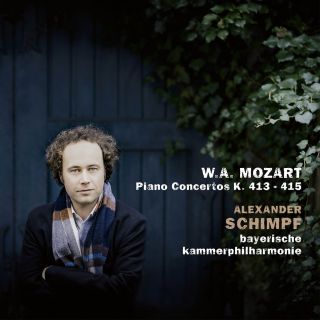 IT SHOULD SOUND ENTIRELY NATURAL
„Mozart’s music poses special challenges to performers, and they have often been pointed out. As
it would seem, certain fundamental tensions or contradictions inherent in music making are taken
to extremes: many works by Mozart require that the instrumental process and conditions
responsible for producing the sound should retreat into the background in favor of the musical
result as we hear it.

No expenditure of energy should be noted or heard. Fine, precise timing
adjustments should never sound organized or deliberate. This music should ideally be presented as
something that emerges entirely naturally, of its own accord. All the mental and technical effort in
the background should be eliminated from the forefront of perception. Otherwise, the typically
‘floating’ Mozartian natural effect, that magical inner balance, cannot emerge.. ……..

On this
recording we make use of the version specifically authorized by Mozart: eschewing additional
wind parts. Although the wind parts composed by Mozart for these concertos can indeed provide
some color, they do not have anything essential or indispensable to add in terms of musical
substance. (Alexander Schimpf, Booklet)

Alexander Schimpf has been pursuing a successful career as a concert pianist,
performing regularly on several continents. Invitations to play solo piano recitals and to collaborate
with renowned orchestras have led to appearances in well-known classical music venues such as the
Konzerthaus Vienna, the Konzerthaus Berlin, Zankel Hall at Carnegie Hall in New York City, the Marinsky
Concert Hall in Saint Petersburg, the Great Hall of the “Alte Oper” in Frankfurt, the Beethovenhalle in
Bonn, the Meistersingerhalle in Nuremberg, the Cologne Philharmonie, and the Munich Philharmonic Hall.

Apart from frequent appearances in the US, Alexander Schimpf has also concertized in most European
countries, in China, Taiwan, Vietnam, and several South American venues.

Two focuses in Schimpf’s repertoire are Vienna Classicism and French music. Furthermore, he is
committed to making contemporary music known to wider audiences and has given a number of
world premieres of solo and chamber music works dedicated to him.
In 2016 Alexander Schimpf was appointed piano professor at the Hanover University of Music,
Drama and Media.

Since 2009 he has released three solo CDs on the GENUIN and OehmsClassics labels; this is his first
CD production as a soloist performing with an orchestra.

The orchestra has gone on tour throughout Europe, to the US, Brazil, and, most recently, South Korea,
performing in a number of international festivals. Recent appearances took place in the Frauenkirche
in Dresden, in the Philharmonie in Cologne, and in the Vienna Staatsoper.
The ensemble works closely and frequently with renowned early music specialist Reinhard Goebel.
Collaborations with high-ranking classical artists such as Christopher Hogwood, Albrecht Mayer, Leonidas
Kavakos, Nils Mönkemeyer, Maximilian Hornung, and Mstislav Rostropovich, as well as with jazz musicians
such as Dave Brubeck, Chick Corea, and, most recently, with saxophonist Marius Neset, all testify to
the orchestra members’ first-class musicianship. Soprano Simone Kermes will present her new programme
Inferno e Paradiso on several occasions with the Bavarian Chamber Philharmonic in September 2020.

The Bavarian Chamber Philharmonic has received several awards, including the European Music Advancement
Prize, the Diapason d’Or from the French classical music magazine Diapason, and the renowned
German ECHO Klassik Prize. The orchestra has made over 20 recordings for outstanding European labels.
The ensemble’s openness to contemporary music is evident in a great number of world premieres
and commissions from composers of our time: Moritz Eggert, Malin Bång, Henning Sieverts, Richard
Dünser, and Annette Focks have written works for the Bavarian Chamber Philharmonic.

Particularly
since 2018, the ensemble has shown increasing engagement in bringing music to children and
youngsters. Under the “young bkp” banner, the ensemble has started to organize family concerts as
well as a series of interdisciplinary workshops for schoolteachers and schoolchildren.
www.kammerphilharmonie.de