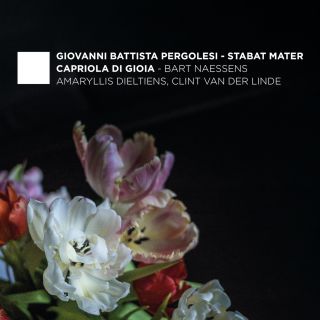 The Stabat Mater by the Italian late baroque composer Giovanni Battista Pergolesi (1710- 1736) invariably holds the number one posi- tion in many western classical music charts. In Pergolesi’s own era, his composition received enormous acclaim and was fre- quently a source of inspiration for the many tone poets who wanted to follow in his foot- steps. Why has this pole position remained inviolable throughout the centuries and why is the Stabat Mater unanimously proclaimed as the ultimate composition of the classical repertoire by a hugely diverse and widely spread audience, year after year?

The fact that so many people are moved by this textbook example of simple, captivating sacred music has intrigued us for years and led us to study this work more closely in an attempt to find out what the ingredients of this special composition are.

Has Pergolesi found the perfect balance between reason and emotion? Is his work the nec plus ultra in terms of musical expe- rience and immersion? Or is the glory and widespread familiarity of the work mainly due to its mainstream exposure via movies and television?

As always, we wanted this quest to be as authentic as possible so we could rediscov- er the original intentions of the composer. To achieve this, we tried to distance our- selves from established choices regarding phrasing and dynamic, and from possibly standardised tempi. We let ourselves be inspired by a virginal score, stripped of all possible input and interpretations in order to be surprised again by the fundamental intentions of the composer. During this pro- cess, we constructed a contemporary inter- pretation of the original text in the universal – and very topical – theme of the helpless mother that sees her child suffering. All these elements led to this re-interpretation of Pergolesi’s masterpiece.

The content of this text is very emotional and compelling. Mary’s lament at the foot of the cross upon which her son has died,
is imbued with intense emotions. The fact that Pergolesi wrote this work in seclusion in a monastery during the last year of his life, when he knew he was dying – he died of tuberculosis at a very young age – un- doubtedly influenced his interpretation of this medieval poem. Through the mas-
terful melodies that flowed from his quill, combined with compelling tonalities and the clever use of numerous rhetorical devices, his music expresses the emotional truth of the narrative succinctly and completely immerses the listener in the story.

For this version, we brought together two wonderful vocalists who are symbiotic and complementary both in terms of personality and musical interpretation. To emphasise the intimate and personal character of the work we have deliberately chosen a string ensemble with solo instruments, supported by the most traditional line-up of basso continuo in sacred music (organ & theorbo), which was given all possible improvisational freedom. This resulted in a ‘new’, fresh inter- pretation of this well-known piece of music, while we searched for the primal emotions of this beautiful poem about Mary and the melody it inspired.

After Pergolesi’s intense musical interpre- tation of this enthralling poem, there can only be respectful silence: for the suffering of mother and son; and for the greatness of this baroque, inspirational composer and his sublime work.

However, we decided to juxtapose the moth- er’s suffering with Magdalene’s loss. The Venetian composer Antonio Caldara wrote an oratorio, Maddalena ai Piedi di Cristo, in which this more earthly love is beautifully set to music. His sacred music excels through its simplicity, transparency and endlessly creative melodic inventions. The wondrous melodies grow with limitless artistry out of a simple bass structure, with which Caldara manages to create an enormously expressive piece and – like Pergolesi – translate this text into music so well. We chose three arias from the oratorio sung by Magdalene, which reflect her loss while she stands at the feet of her beloved Jesus.

You can hear Mary and Mary Magdalene cry, sob and gasp for breath, weighed down by this intense sorrow, but sublimely set to music by Pergolesi and Caldara.

Driven by their mutual passion for the repertoire from the baroque era, Amaryllis Dieltiens (soprano) and Bart Naessens (organ / harpsichord) founded the ensemble Capriola Di Gioia in 2007. They enjoy the challenge of sharing this often very dramatic and moving music with their public, keeping within the historical context but also in a very personal and expressive way.

Both as soloists and in several ensembles Amaryllis and Bart have gained invaluable experience. They have worked with musicians of great renown and performed at numerous European venues. Consequently they have had the opportunity to develop their own musical personalities across a very extensive repertoire.

During its first years of existence the ensemble developed a clear direction and vision. Along with deliberate, intensively researched choices from the impressive repertoire for soprano and basso continuo, Capriola Di Gioia is rediscovering the purity of the compositions and striving for a compassionate, honest and pure interpretation of the text, both vocally as well as instrumentally. The result is a theatrical performance in which they engage with the public to arouse their empathy with each character.

The ensemble focuses on rarely performed repertoire for soprano and basso continuo. Some programs require extra musicians and on these occasions they involve young highly talented musicians from all over the world who have also lost their hearts to this wonderful music. The pleasure of making music comes first (as referred to in the name of the ensemble), but their considerable and never-ending passion, their extremely delicate approach and feeling for the repertoire from the baroque era results in a very warm and wholehearted treat for their public.

Capriola Di Gioia is increasingly being seen at Belgian and European grand stages like Festival of Flanders, Concertserie Beek, Bozar, early music festival in the Netherlands, concertgebouw Brugge etc… In 2011 they presented their first CD (recorded for the label Aeolus) with a unique selection from the well-known and lesser-known Italian baroque repertoire. In 2012 they recorded and released Stabat Mater by L. Boccherini. In 2013 a Christmas-CD was presented to the public and in October 2016 another CD was released with music by Buononcini, Scarlatti etc…

In 2017, they released their first album on Evil Penguin, with works by Boccherini.