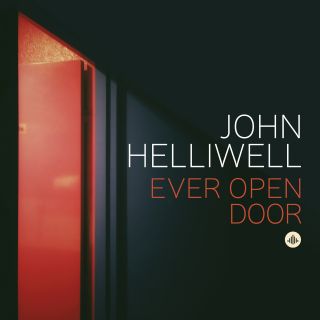 EVER OPEN DOOR
Ever Open Door is an appropriate title for this album because my musical influences are wide-ranging — I’m always listening.

NOTES ON THE TRACKS
If Everyone Was Listening
I was impressed with this Roger Hodgson song at my first rehearsal with Supertramp in July 1973. It subsequently appeared on our album Crime Of The Century.

Gather The Spirit
Bob Mintzer included this Jim Scott composition on his album Quality Time and Andy Scott (no relation to Jim) arranged it for Bob to play with a string orchestra at the 2015 Hong Kong Summer Jazz Festival. Andy recently distilled his orchestral arrangement to four string players, saxophone and Hammond organ.

Lord Stackhouse
This tune was originally written for me by Andy Scott and was featured on his Sax Assault album Sax Of Gold in 2007. In the mid 1990s I lived in a house called Stack House, on Stackhouse Lane, in Stackhouse, North Yorkshire, so, when I was looking for an email address, I thought that lordstackhouse would be apt! The ballad is a challenge, mainly due to its complex chords.

Del Soldato In Trincea
This poignant tune was written by Paulo Fresu for Ermanno Olmi’s 2014 film Torneranno i Prati (Greenery Will Bloom Again), a tribute to the suffering of Italian soldiers in the First World War. I was introduced to it by Raimondo Meli Lupi, who featured it on his album 1000 Papaveri Rossi.

. . . It Seemed That Life Was So Wonderful
Inspired by “Gather The Spirit,” Andy Scott and I decided to write a gospel-style tune. The title comes from the second half of the first line of Supertramp's “The Logical Song.” Violinist Simmy Singh contributes a stylish improvisation.

Washing Of The Water
Peter Gabriel’s glimpse into his secret world has unconventional percussion provided by the string players. The clarinet reflects Gabriel’s refined melody, while the stronger saxophone comes in around two thirds of the way through, improvising over the part where Gabriel sings “Letting go, it’s so hard, the way it’s hurting now” in his version. Violinist Rakhi Singh has the last line, where Gabriel sings, “Bring me something to take this pain away.”

Aquarelle
Andy Scott’s beautiful ballad features the quartet playing the entire tune, followed by my improvising. After the strings and the organ recapitulate the melody, I join them in the coda.

The Lads In Their Hundreds
A. E. Housman’s poem of young men leaving for the Boer War was set to music by George Butterworth, who, tragically, like many of the lads in their hundreds, was killed in the Battle of the Somme in 1914. I first heard it sung by June Tabor with Iain Ballamy and Hugh Warren in the group Quercus. This version is completely improvised by me, John Ellis and Ashok Klouda — no music, no rehearsal!

Lullaby For Channing
Mark Hart, my Supertramp colleague, wrote this beautiful melody at a sorrowful time in his life, a simple statement of which is appropriate.

Ever Open Door
The lyrics of Rick Davies’s sad song begin with “Sharing’s good, sharing’s fine / But no one wants to share this world of mine.” They conclude with a glimmer of hope: “I’ll keep a welcome outside my door.”

The Wayfaring Stranger
I have heard many versions of this 19th-century American folk elegy, from Johnny Cash to Charlie Haden. The melody is simply stated before Andy Scott’s arrangement takes the strings to a more complex harmonic world — eventually returning to earth.

Waly Waly
A couple of years ago a friend asked me to play at his daughter’s church wedding. When I found out that there was to be a string quartet playing as well, I asked Andy Scott if he would write an arrangement for the five of us. It was received enthusiastically by the congregation! This proved to be the spark that kindled this entire project.

The Ballad Of The Sad Young Men
One of my favourite tunes. It first came to my attention played by the Keith Jarrett Trio. Subsequently, I have enjoyed versions by Kurt Elling and Boz Scaggs, but the true inspiration came from hearing it superbly played by Ernie Watts on his 2009 album Four Plus Four.

Father O’Shea
I first heard this tune played by Charlie Haden on plucked double bass with his quartet and a string orchestra under the title “The Left Hand Of God,” also the title of a 1955 film with music by Victor Young. On investigating, I found that the tune is, in fact, a musical portrait of Humphrey Bogart’s character in the film, Jim Carmody, masquerading as a priest, Father O’Shea.

John Helliwell
Will be added