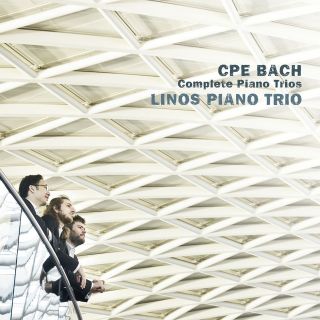 - This seems to be the only complete recordings of CPE Bachs Piano Trios since more than 15 years.
- The LINOS PIANO TRIO is releasing herewith his debut album, although playing together already for 10 years, winning many high class und powered awards around the world.
- Especially the Linos Piano Trio is very well received in the UK, having played many concerts and conducting masterclasses around the UK.

„In Hamburg, 1775, Carl Philipp Emanuel Bach, by then an internationally celebrated and well-connected figure, was surely aware of the genre’s popularity. After all, his half-brother, the London-based Johann Christian, was central in promoting this new culture of domestic piano playing. Responsive to the market demand, C.P.E. came to an agreement with the London publisher Bremner to publish the following year Six Sonatas for the Harpsichord or Pianoforte accompanied by Violin and Violoncello (Wq. 89). Despite the title, Bach referred to these works at times as Trios, at times as Sonatas, and sometimes even as “Trios (which are also Solos)”.

It seems he didn’t really know what to call them, as they sat in between his previously clear categories of Trios (in the Baroque trio-sonata format of two equal instrumental parts accompanied by basso continuo), keyboard solo works, and the “Soli” (works for various solo instruments to be accompanied by the continuo). His ambivalence towards this fashionable new genre was evident in a letter where he contemptuously referred to the
accompanied sonatas as a “non- or half-entity”.

But regardless, the publication was exceedingly successful, and Bach enjoyed what he probably considered a nice bonus to his usual duties of writing religious choral works: “I am having more luck than I have the right to expect. People are crazy about my modest concoction, from which one may profit.” He published two further sets (Wq. 90 and 91) with Breitkopf in Germany in 1776 and 1777, to great success.

Business acumen aside, these works reveal C.P.E. Bach at the height of his career and are full of invention, expression, and shocking surprises
that at times surpass what even Beethoven might dare to do..…..“ (Excerpt from the liner notes by LINOS PIANO TRIOS)

First Prize and Audience Prize winner of the Melbourne International Chamber Music Competition 2015, the Linos Piano Trio is
increasingly recognised as one of Europe’s most creative trios.

Drawing on the rich and varied backgrounds of its members, which encompass five nationalities, as well as specialisms in historically
informed performance and new music, the Linos Piano Trio possesses a distinctive musical voice. Praised for its “slow-burning, gripping
performance” by The Strad, and an “astounding performance” by the Hannoversche Allgemeine Zeitung, the trio has performed in
prestigious venues worldwide.

In 2014 the trio was awarded the Royal Philharmonic Society’s Albert and Eugenie Frost Prize for an
outstanding ensemble, and since 2017 they hold the position of ‘Artists-in-Residence’ at London’s Trinity Laban Conservatoire.
Linos (Λῖνος) was a celebrated musician in Greek mythology.

The son of Apollo, Linos received from his father the three-stringed lute, and
became known as the inventor of new melodies, lyric songs, and eloquent speech. As one of the original demi-gods of music, Linos had
many pupils, most famously Heracles and his brother Orpheus.