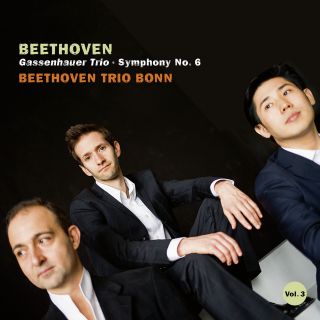 - This is the third and final Volume to the little series “Original Trio versus “home music” version of large scaled symphonic works by Beethoven.
- Coupled with the very well-known Gassenhauser Trio is the lyric pastoral symphony No. 6 by Beethoven, in a completely unknown trio arrangement by the Brahms friend Christian Gottlieb Belcke.
- In Beethoven’s time only the higher-class people were allowed to listen live to full scale orchestral works and therefore it was almost common that those symphonic pieces appeared as arrangements for the “Home music”, mostly Piano Trio formats

In a series of 3 CDs, the Beethoven Trio Bonn explores the confrontation between one of Beethoven’s standard works for piano trio with a further “house music” arrangement of one of his orchestral works. More than providing an interesting pairing, the Beethoven Trio Bonn was keen on interpreting an original work for piano trio alongside an arrangement of an orchestral work “downsized” to piano trio format. This new concept
delivers surprising, unforeseen results.

Composers and publishers in Beethoven’s day sought to indulge the pleasures of the middle class: dozens of arrangements and transcriptions of orchestral works were in wide circulation for domestic use. Haydn, Mozart and many others had always tried to provide access to the wonders of symphonic music for those members of the population who could not gain entrance to the grand concerts of the upper classes.

Up to the 1930s, music publishers continued to commission composers to arrange and transcribe symphonies and other orchestral works, in order to make them readily available as chamber music; no composer found the task too lowly, since such work was a good source of steady income.

The very well-known Piano Trio No. 4 (Gassenhauer) with his enormous witty playfulness (we listen to the version with the violin instead of the clarinet) and his three (!) movements is partnered with the Symphony No. 6, in an arrangement of the Brahms friend Christian Gottlieb Belcke (1796-1875). Listening to it will be a big surprise, as the Sixth is a lovely flowing full body music piece with all the details not forgotten, wonderfully balanced with all its pastoral melodies.

Vol. 3 rounds up the trilogy “Original versus „Home music-versions” of large-scale symphonic works. And surely some of the six pieces contains quite nice surprises, showing the music in different (new?) aspects. All of that is owed to the playing of the Beethoven Trio Bonn (“BTB”) with its richness of nuances and colours, interpreting the six trios, highly expressive as well as impressive.

The Beethoven Trio Bonn first made themselves a name with compositions by their eponym Beethoven
and other Romantic works, before more recently turning their attention to Russian repertoire. Mikhail
Ovrutsky (violin) and Grigory Alumyan (cello) are two of the founding members of this ambitious trio,
which in 2015 maintained and strengthened its tradition with the addition of pianist Jinsang Lee.
All three musicians are foremost in their instruments, have won major international awards, and
pursue successful solo careers.

The Beethoven Trio Bonn are one of the most interesting and highly profiled piano trios currently
performing. Since their inception in 2005, they have delighted audiences as well as national and
international music critics with their “highly expressive passion” (Kulturradio Berlin-Brandenburg)
and their “daring, yet convincing performances” (Bonner Rundschau).

The ensemble has recorded four highly praised CDs: Beethoven/Mendelssohn, 4x No. 1 (Arensky,
Shostakovich, Kapustin, Rachmaninoff), as well as world première performances of Russian composers
Alexander Alyabyev and Georgy Sviridov. All released on the CAvi-Music label, these recordings
have caused a sensation on the German and international music scene and have been nominated
for several distinctions, including the German Record Critics’ Award.

Guest performances have taken the musicians all around the world – for example, to South Africa,
Austria, Spain, Japan, and the US, and to renowned festivals including the Beethovenfest in Bonn. In
2018 and 2019 they performed at the Beethoven Night in Bonn, and on the occasion of the inauguration
of the Beethoven Jubilee Year exhibit at the Bundeskunsthalle.

At the International Telekom Beethoven
Competition the trio awarded its own sponsored prize, and they gave their début performance at the
Grands Interprètes Festival in Geneva. Upcoming appearances will take place all over Europe and in Korea.