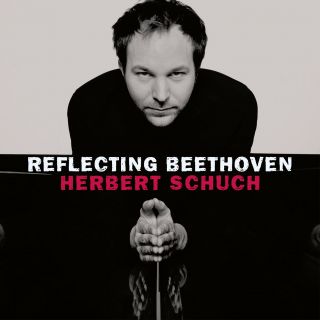 - There are two young composers who are reflecting on Beethoven’s individual pieces, like the entertainer Mike Garson and the young Germany Leander Ruprecht, as well as the French Henri Pousseur

- 2020 we are still in the Beethoven year and whether there is an anniversary or not, each composer is reflecting on the master on Classical music

- The German pianist HERBERT SCHUCH continues his idea to set modern composers (such as Ligeti in his recent CD Bagatellen 8553443) against the traditional, but revolutionary working Beethoven

REFLECTING BEETHOVEN
Mr Schuch, you are celebrating Beethoven’s anniversary year in 2020 and, at the same time, going beyond his legacy. What does this composer mean to you?

Beethoven has been pressed into many categories. At times he was seen as the great Titan, at others as an idealist; later approaches occasionally attempted to “de-emotionalize” his music. He simply had an incredible ability to be many things, but his music was never dispassionate. Beethoven could even sound overemotional, and then display dry wit! I see him at a crossroads in music history where he was occasionally still allowed to write plain, simple music, and I find that thoroughly moving.

You introduce each of the three Beethoven sonatas with a piano piece from the late 20th or early 21st century. What is the idea behind this approach?

I’m always searching for connections across the centuries. Composers relate to one another, consciously or unconsciously. For instance, unconsciously:

Henri Pousseur wasn’t thinking at all about Beethoven’s G Major Sonata. When I was thirteen years old, I performed the Pousseur piece at the European Youth Music Competition: it was a compulsory piece, and I won a special prize. It was the first truly “modern” piece in my repertoire, and required things I wasn’t prepared for at all. At the beginning, for example, six different dynamic shadings are overlapping simultaneously in both hands. I found those challenges exciting: after having gone through such an experience, I had “tasted blood” as far as contemporary music was concerned.
In the middle of the piece, there is an improvisation on predetermined musical material: I wrote my version down, and have recorded it that way now.

At the onset, the piece features a displacement of one semiquaver between the two hands, which is maintained until the phases come together again. This always reminded me of the first movement of Beethoven’s G Major Sonata. Beethoven was surely one of the first to discover how such small shifts can generate a kind of jagged, forward-moving energy, and he presents it in a dry, unemotional manner………

(Excerpt of an interview by Rainer Nonnenmann, from the booklet)

Pianist Herbert Schuch has gained a reputation as one of the most interesting musicians of his generation
with his strikingly conceived concert programmes and CD recordings.

He has worked with a number of renowned orchestras, including the London Philharmonic Orchestra,
the City of Birmingham Symphony Orchestra, the NHK Symphony Orchestra, the Mariinsky Theatre
Orchestra, the Munich Philharmonic, the Deutsches Symphonie-Orchester Berlin, the Bamberg Symphony,
the Dresden Philharmonic and the radio orchestras of hr, MDR, WDR, NDR Hannover und Danish
Radio, as well as with the Camerata Salzburg and the Festival Strings Lucerne, with conductors
such as Pierre Boulez, Valery Gergiev, Jakub Hr °uša, Jun Märkl, Yannick Nézet-Séguin, Jonathan Nott,
Markus Poschner, Michael Sanderling, and Mario Venzago.

Herbert Schuch was born in Timi¸soara, Romania, in 1979. He had his first piano lessons in his native
city with Prof. Maria Bodo, before his family moved to Germany in 1988, where he has lived since.
He continued his musical studies with Kurt Hantsch and then with Prof. Karl-Heinz Kämmerling at
the Mozarteum in Salzburg. Recently, Herbert Schuch has been especially influenced by his encounters
and work with Alfred Brendel.

As a child, Herbert Schuch also played violin for 10 years and has been an enthusiastic chamber
musician ever since, sharing the stage with musicians of the likes of Nicolas Altstaedt, Vilde Frang,
Julia Fischer, Maximilian Hornung, Sebastian Manz, and Daniel Müller-Schott.

He also forms a successful piano duo with Gülru Ensari: together, they have recorded two releases
for the CAvI-Music label, featuring a wide range of repertoire from different periods.

In addition to his performance activities, Herbert Schuch is also involved in the organization Rhapsody
in School, founded by Lars Vogt, which promotes classical music education in schools.
www.herbertschuch.com