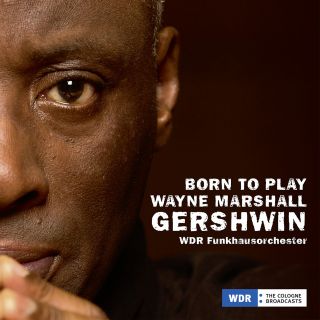 - Born to play the organ – was Wayne Marshall’s artistic life goal. Therefore, he will now be more present worldwide as an organ player and soloist, independent from a job.

- Almost no piece in the last 150 years of classical works has reached such a publicity like Gershwins’s Rhapsody in blue and made Gershwin to the musical star as he is nowadays. Gershwin really changed the life of Wayne Marshall, Gershwin is close to his heart.

„Wayne Marshall was eight years old when, at home in England, he heard a Gershwin concert broadcast on the radio – a pivotal listening experience, as he recalled fifty years later in a WDR video clip. It may have set his life in a new direction, eventually leading to Cologne as Chief Conductor of the Funkhausorchester. It comes as no surprise that outstanding recordings from those six years at WDR include productions of great Gershwin works………(Excerpt from the lines notes by Joh. Jansen)

Wayne Marshall called it to an end, after ten years of being chief conductor of the WDR Funkhausorchestra, the second orchestra of the Westdeutscher Rundfunk broadcast station. Wayne just wanted to look out for new challenges, internationally and worldwide, being an independent musician, mainly organ player. This CD is a document of his work with the WDR Funkhausorchestra.

Wayne Marshall’s relationship with music began at the age of three, when he had already familiarised
himself with the piano; he only began to take formal lessons a few years later. He was
a student at Chetham’s School of Music in Manchester from 1971 to 1979. He won a foundation
scholarship to the Royal College of Music in London, which was combined with the post of Organ
Scholar at St George’s Chapel, Windsor Castle, and he was a postgraduate student at the Hochschule
für Musik in Vienna from 1983-84.

Wayne’s musical forays led him to experiment in multiple genres, including church music and jazz, but
he quickly found his professional voice as an organ/piano recitalist. This was also the time in which Wayne
began to find his footing as a conductor, a path that would see him working with some of the world’s
most accomplished orchestras. He is thus a man with two gifts and one legacy.

He was the BBC Music Magazine’s Artist of the Year in 1998. In 2004, Wayne received an Honorary
Doctorate from Bournemouth University, and in 2010 became a Fellow of the Royal College of Music.
2016 he received the prestigious Golden Jubilee Award in commemoration of his services to music.

is surprisingly different. It delights the audiences with a wide array of
genres, gems from musicals, operas and operetta, film music and unknown jewels from the classical
era, as well as current streams such as symphonic jazz and even Rap and Dubstep Crossover. “Serious
music” is just another color in the musical rainbow of the orchestra.

The orchestra loves to travel new and surprising musical roads – with innovative, imaginative concert
programs and a wide offering of educational projects expertly tailored for specific age groups. The
fine balance of exciting programs and relaxing evenings is a hit with its fans but also opens the door
for less experienced concertgoers.

The WDR Funkhausorchester performs together with international soloists and ensembles, but also
works with and within other artistic disciplines such as film, dance, pantomime, visual arts and
theater. Moderators, storytellers and comedians add a special note to the performances so that each
concert becomes a unique experience.

The WDR Funkhausorchester named for its spectacular, historic broadcasting center in the heart of
Cologne is one of the most listened-to German orchestras. With regular live broadcasts, radio series
and recordings it strives to accompany the audience throughout their day.

The guiding principle:
Always worthwhile, Always close to our audience, There for Cologne, our region and the world.

Wayne Marshall, principal conductor and, by the way, an internationally known virtuoso organist
and pianist, fires up his orchestra and audiences alike with his ideas and his energy. Together with
his musicians he realizes his vision of a modern, self-confident pops orchestra each and every day.