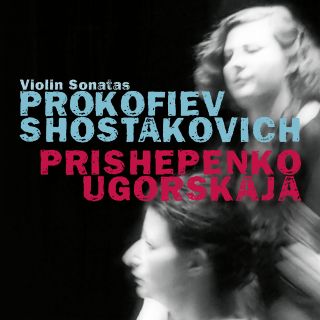 - This recording will stay as a singular milestone, Dina Ugorskaja died in September 2019
- Natalia Prishepenko was the primaria of the ARTEMIS QUARTET for more than 15 Years
- There are only a handful recordings of this extraordinary violin player available.

It will remain a singular coup!!

In February 2016 the recording took place in the Studio 2 of the Bayerischer Rundfunk in Munich. Dina Ugorskaja pursued the finishing process of the master with great impulse and unbelievable energy during all the time when her health abated, even to the point where she selected and approved herself the booklet notes by Tatjana Frumkis.This project will stay simply as a singular milestone, there was a lot planned by the two artists.

„………They were also ambivalent toward one another. Prokofiev accused Shostakovich of “devouring everything” (the fact that the younger composer dared to incorporate the street genres of entertainment music into his classical compositions), and affirmed that Shostakovich had no gift for melody.

Shostakovich, for his part, occasionally found Prokofiev’s music too crude, too clearly illustrative. Yet in spite of the largely unfair criticism they directed toward one another, each one never let his counterpart entirely out of his sight, or, to be more exact, of his ears. Ever since the 1920s their music
was featured on joint recital programmes.

The young Shostakovich acknowledged Prokofiev’s influence on certain of his own works. Prokofiev, when abroad, encouraged “chemical exchange between Russia and Europe” and promoted Shostakovich’s works in particular, even expressing the wish that his younger colleague be allowed to perform abroad, too. But that was not to be.

From the late 1930s to the early 1950s, their paths went on crossing in the territory of the totalitarian Soviet Union. Ever since then, the Prokofiev-Shostakovich dichotomy, an undeclared competition, has never ceased. (From the booklet lines notes by Tatjana Frumkis).

Born in Siberia in 1973, Natalia studied with her mother, Tamara Prishepenko, an eminent pedagogue
in the Soviet Union. She had played in all the leading concert halls in the USSR, and had already
won important prizes such as those of the Wieniawski International Competition and the All Union
Competition. In 1988 Natalia Prishepenko arrived in Lübeck to study at the Musikhochschule with
Zakhar Bron.

She came to prominence in three of the most prestigious international competitions: the Paganini in
1990, the Tokyo in 1992, and the Reine Elisabeth de Belgique in 1993. Following these successes,
her solo career took flight. From 1994 Natalia Prishepenko was primaria of the Artemis Quartet for
eighteen years and was traveling the world celebrating success by success.

This time is inspired by the teachings of Walter Levin, the Alban Berg, Juilliard, and Emerson Quartets,
Alfred Brendel, and David Geringas; also by the results of a direct contact with composers such as
Kurtág, Lachenmann, Lutosławski, Nono, and Ligeti; and not least inspired by a musical exchange
with artists like Sabine Meyer, Elisabeth Leonskaja, Juliane Banse, Jörg Widmann, Leif Ove Andsnes,
Truls Mørk, Thomas Kakuska, Valentin Erben, and the Alban Berg Quartet. Natalia Prishepenko did
leave the quartet in 2012.

Teaching is one of the numerous talents of this artist. As a professor at the Hochschule für Musik
Carl Maria von Weber Dresden and teacher of numerous masterclasses, Natalia Prishepenko sees
this task as a way to continue learning and for personal development. She is also frequently invited
to be a jury member at significant competitions for chamber music and violin.

Natalia Prishepenko plays an instrument by Joseph Guarneri, generously loaned to her by Ms.
Barbara Westphal.

Born in Leningrad (now once more Saint Petersburg) into an artistic family of Jewish origin, Dina
Ugorskaja started learning the piano when she was young, as well as voice and composition. In
1990, when she was fifteen years old, she became the target of anti-Semitic threats; her family had
to leave the Soviet Union abruptly, and they fled together to Germany.

The “philosopher at the piano” has made herself a name with a performance style marked by profound
sensitivity and sobriety.

Her engagements have led her to make solo appearances at the Gewandhaus in Leipzig, the Liederhalle
in Stuttgart, the Philharmonie in Cologne, the Herkulessaal in Munich, the Sala Verdi in Milan, and Radio
France Auditorium in Paris. She has been invited to perform at festivals including the Schubertiade in
Feldkirch and the Kassel Music Festival.

Dina Ugorskaja is also passionately committed to chamber
music: for instance, ever since her participation at Lars Vogt’s chamber music festival Spannungen
in Heimbach, she has formed a duo together with the renowned cellist Tanja Tetzlaff.

2019 marked the 10th anniversary of her fruitful collaboration with the CAvi-Music label. In coproduction
with Bavarian Radio (Munich), she has released recordings of Handel suites, late Schumann
works, the six last Beethoven sonatas, and both volumes of Bach’s Well-Tempered Clavier – all of
which have been praised by critics.

Regarding her recording of Beethoven’s Hammerklavier sonata,
Eleonore Büning wrote in the Frankfurter Allgemeine: The immense Adagio sostenuto, bearing the
indication that it is to be played ‘passionately and with much feeling’, is rendered as a sublime,
radiant hymn, and one would no longer want to hear it any other way.

Regarding her recording of the Well-Tempered Clavier, Crescendo magazine wrote in October 2016:
The listener does not feel directly addressed, but rather as the silent witness of these intimate dialogues
between Bach, God, and the universe – thanks to the fact that Dina Ugorskaja always maintains a
noble distance that protects the inner fragility of Bach’s musical discourse. […] This is an impressive
manifesto for the freedom of the human intellect.”

Ugorskaja’s recordings for CAvi-music have been repeatedly nominated for the International Classical
Music Awards and for the German Music Critics’ Prize. Her last album with works by Schubert received
the ICMA award posthum.

Dina Ugorskaja passed away after a long period of illness in September 2019.