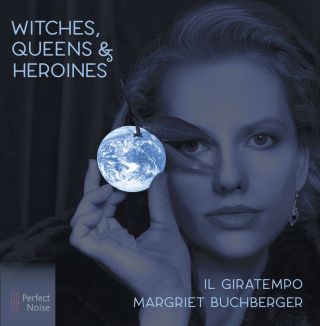 - The debut album of an extraordinary voice, Margriet Buchberger
- Handel's strongest female characters united on one CD.
- Handel, sung with a naturalness, sensuality and luminosity that make other singers look pale by comparison.

Audacious fighters, indomitable queens, and evil witches: On their debut CD, soprano Margriet Buchberger and the musicians of Il Giratempo put Handel’s strongest and most mesmerizing women centre stage - where they rightfully belong. The „wild“ women in Georg Friedrich Handel’s operas are truly queens of their own destiny.

They rule over empires, fight in bloody battles, are courageous hunters and passionate lovers. Their adventures are gems in a sea of female characters bound to tradition and cliché.“Good girls” may go to heaven, but in baroque opera they do so either as victims or trophies.

At best they come into their own when they sacrifice themselves virtuously to the mercy of fate and/or the men surrounding them. We have searched for strong, self-determined women – and found fascinating, modern characters, brought to life through beautiful music.

Margriet Buchberger is an internationally performing Soprano. From Early to Contemporary Music: With her broad repertory, she has made the concert venues of Europe her home. She was engaged for Stagione Concertistica / Arena die Verona, Concergebouw Amsterdam, Mozartwoche Salzburg, Händelfestspiele Halle, Recitals at Teatro La Fenice, concerts with "Orchestra del Teatro alla Scala" and "La Cetra" under the direction of M° Andrea Marcon.

Margriet Buchberger studied at the Conservatorio Giuseppe Verdi in Milano with Prof. M. Hayward
and finished her musical training in Würzburg.

After receiving her degree in vocal performance from the Hochschule für Musik Würzburg, she subsequently
studied Repertory with Cheryl Studer, Krisztina Laki, and Edita Gruberova.

She was a recipient of the „Cubec Scholarship for Young Singers“ founded by Mirella Freni as well as
being a scholarship holder of the International Association of Wagner Societies.

From Early to Contemporary Music: With her broad repertory, Margriet Buchberger has made the stages
and concert venues of Europe her home. The soprano is a regular guest at Associazione Mozart Italia and
the Mozartwochen hosted by Universität Mozarteum Salzburg.

She sings at international festivals such as
the Schubertiade in Dänemark/Roskilde, Händel- Festspiele Halle, Internationale Mai-Festspiele in the
Staatstheater Wiesbaden, Mittelrhein Musikfestival in Germany and the Stagione Sinfonica Concertistica of
the Arena di Verona.

Margriet performed in Turku and Helsinki with the ensemble “Musicians of the King‘s Road” and sang a
concert dedicated to W.A. Mozart at the Palazzo Vecchio in Florence. She collaborated with Italian conductor
and pianist Leone Magiera for solo recitals at the Teatro La Fenice in Venice.

In 2019/2020, she will sing in a series of concerts with Ensemble La Cetra & the Venice Baroque Orchestra
under the direction of M° Andrea Marcon, which will take her to festivals and venues such as the Mozartwoche
Salzburg, Theater Basel and Concertgebouw Amsterdam.

With the Orchestra del Teatro alla Scala under M° Andrea Marcon she will perform in a sacred
programme at San Fedele church in Milan, Italy.

The “Time Travellers” of Il Giratempo do not want to take you back to centuries long gone.
Rather, the young ensemble has made it its mission to shake up the present by delving into the treasures
of the past.

In 2017, the lutenist Vanessa Heinisch founded
Il Giratempo with some of her favourite colleagues
to realize projects arising out of cherished dreams –
the ones that orchestral musicians usually only talk
about longingly over coffee: “You know, one day we
should really ...”

Il Giratempo Strings explore the baroque
orchestral soundscapes - and build a bridge to modern
times in terms of music and repertoire: Musicians
from renowned German baroque ensembles
and orchestras have come together to make their
“favourite projects with favourite colleages” a reality.