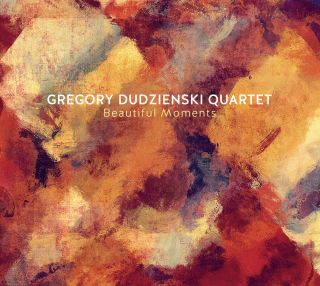 Catalog number: OA2 22183
Releasedate: 08-01-21
- "With a full, husky tenor sound in tow the former Bergonzi student brings to mind not only his former mentor but the timbres of Dexter Gordon and Joe Henderson as well.” - The Saxophonist Magazine
After 20 years on the move, including time spent living and performing in Europe, tenor saxophonist Gregory Dudzienski recently returned to Chicago, settling into a period of engagement with the city's mighty music community, and developing a cohesive group dynamic with like-minded colleagues. Finding bassist Kelly Sill, pianist Chris White and drummer Jeff Stitley, they quickly formed a musical bond that is evident on this collection of seven Dudzienski originals. Their dedication to the melodic, harmonic and rhythmic language of jazz of the late '50s and '60s, provides a substantial base for the group's explorations and growth. “A great warm sound and his melodic way of playing is all heart.” - Jerry Bergonzi
Saxophonist and composer Gregory Dudzienski lives a life of constant motion. After years of travel, he has become a member of Chicago's strong community of musicians and improvisers. His original music has been featured on the Anagram Series at The Elastic Arts Foundation, the Actual Jazz Series at Cafe Mustache, and the Chicago Jazz Composers Collective At The Green Mill as well as the Is This Jazz Series at AS200 in Providence, Rhode Island, the International Saxophone Symposium in Fairfax, Virginia, and the Salerno Jazz Festival in Salerno Italy. Dudzienski was inspired during his youth by the jazz of the late 1950s and 1960s and has since then continued to be influenced by the melodic, harmonic and rhythmic language of that era.