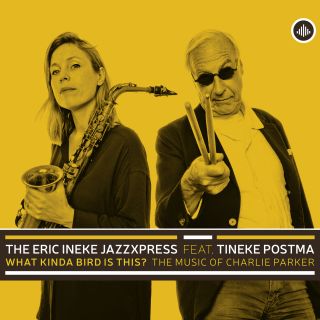 What Kinda Bird is This? The Music of Charlie Parker

Catalog number: CR 73512
Releasedate: 04-09-20
- On What Kinda Bird is This? the listener gets known and lesser known material by Charlie Parker, complimented two pieces based on work by charlie Parker, from the hand of Marius Beets.
- A unique collaboration with one of the best Dutch saxophone players Tineke Postma
- Recorded to celebrate the Charlie Parker centennial

The paths of Eric Ineke and Tineke Postma crossed several times the recent years. The time was there for an album together. The Charlie Parker centennial was the right moment to make it happen, the man who helped to define the bebop. According to Eric Ineke would never have been an Eric Ineke JazzXpress if it wasn't for Charlie "Bird" Parker. On What Kinda Bird is This? the listener gets known and lesser known material by Charlie Parker, complimented two pieces based on work by Charlie Parker, from the hand of Marius Beets.

Eric Ineke (born Haarlem, April 1,1947) is a Dutch jazz drummer who started his career in the 1960s. In 1969 he made his first record with tenor saxophonist Ferdinand Povel and through the years he has played with the Rob Agerbeek Quintet, the Rein de Graaff/Dick Vennik Quartet, the Ben van den Dungen/Jarmo Hoogendijk Quintet and the Piet Noordijk Quartet. During his career he has also played with numerous international, mainly American soloists like Dexter Gordon, Johnny Griffin, George Coleman, Shirley Horn, Dizzy Gillespie, Al Cohn, Grant Stewart, Jimmy Raney, Barry Harris, Eric Alexander and Dave Liebman, recorded numerous CD’s and appeared at many national and international jazz festivals (North Sea Jazz Festival, Nice Jazz Festival, Pescara Jazz, San Remo, Athens, Toronto Jazz Festival, Montreal International Jazz Festival and New York). For more than 35 years he has been the drummer of the Rein de Graaff Trio and since 2006 has led the Eric Ineke JazzXpress, a quintet in the hard-bop tradition. With this quintet, Eric Ineke got invited in 2011 by the American Jazz Museum in Kansas City with jazz singer Deborah Brown where they did a few performances, including one on Kansas Public Radio and a CD recording produced by Bobby Watson.  Eric Ineke also teaches at the Royal Conservatory of The Hague. Eric Ineke is giving masterclasses all around the world. In April 2012 he released his first book The Ultimate Sideman, in conversation with Dave Liebman.

Tineke Postma is an internationally acknowledged jazz saxophonist and composer. She performs with her groups and as a sideman since 2003. Tineke lives in Amsterdam and New York. Her latest cd The Dawn Of Light from 2011 (Tineke Postma Quartet featuring Esperanza Spalding), has been released in 2011 worldwide, received raving reviews and won the prestigious Dutch Edison Award. UK ”The Evening Stardard” called her ”One of the leading ladies in Jazz!”

De Downbeat Poll 2012 has listed Tineke as Rising Star #5 in the soprano saxophone category and #10 for alto sax. On April 30 Tineke performed for the International Jazzday at the Asembly Hall of the United Nations in New York with Wayne Shorter.
Awards

In 2009 Tineke has received the Jazz Juan Revelations Award (Antibes Juan-les-Pins Jazz Festival), in 2006 the prestigious Midem “ International Jazz Revelation of the Year Award”, in 2003 The Sisters in Jazz All Star Award”. Tineke was nominated twice for the Paul Acket Award (North Sea Jazz). Tineke’s cd “The Traveller” received an Edison nominations in 2010 and her latest album “The Dawn of Light” won the Edison, National Category in 2011.

Tineke is part of Terri Lyne Carrington's Mosaic CD and Group which won a GRAMMY for BEST VOCAL ALBUM 2012). Tineke plays 4 solos on this album!
- See more at: http://www.tinekepostma.com/biography#sthash.uxENKp1e.dpuf

The Tineke Postma International Quartet featuring Geri Allen on piano, Scott Colley on bass and Terri Lyne Carrington on drums was founded in 2009, February when Tineke recorded cd “The Traveller. They performed at the Barbican Hall in London, The North Sea Jazz Festival, Jazz a Ramatuelle, Jazz sous les Pommiers Festival in France and at the Blue Note in New York.

Education and teaching
Tineke studied at the Manhattan School of Music in New York with Dick Oatts, David Liebman and Chris Potter. She graduated with honors at the Conservatory of Amsterdam and studied with Ferdinand Povel en Jasper Blom. She taught between 2005-2010 at the Conservatory of Amsterdam. Since 2011Tineke teaches at the Institut für Musik - Hochschule Osnabrück, Germany. She also is a guest teacher at Jazzskule in Voss, Norway. Tineke gave clinics in Tokyo; Japan, Umeo; Sweden and in Germany.