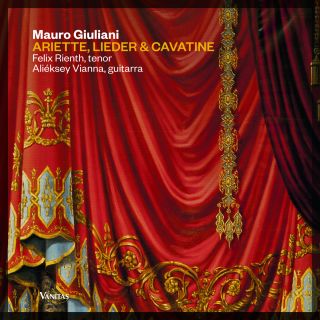 Catalog number: VA 14
Releasedate: 04-09-20
- The Swiss tenor Felix Rienth performed at major festivals, like Ambronay, Paris, Ghent, Lisbon, Granada and recorded more than 20 CDs
-
Mauro Giuliani was known throughout the music world as the “Mozart of the guitar”. After completing his studies in his home town in Italy, he lived for a long time in Vienna, where he worked as a successful guitarist, composer and teacher. Not only did he write over 100 works there, he was also a master cellist. It is said that in 1813 Giuliani was one of the cellists at the first performance of Beethoven’s Seventh Symphony, conducted by the composer himself. Other artists contributing to this performance were luminaries such as Giacomo Meyerbeer, Johann Nepomuk Hummel, and Antonio Salieri. Being a highly revered artist in Vienna, Giuliani soon befriended Beethoven, as well as violin virtuosos Louis Spohr and Anton Diabelli. As one of the most brilliant guitar virtuosos of his time, Giuliani’s performances in Vienna and his concert tours throughout Europe were celebrated by the press and his audiences. The regular concerts held in the Viennese Redoute-Hall, for example those with Louis Spohr, were received with boundless enthusiasm. As the official concert soloist, Mauro Giuliani was also invited to play at the famous Viennese Congress. His guitar compositions were published by the most renowned music publishers in Vienna, some of them also as piano versions. One of his many students and admirers was Empress Marie-Louise of Austria, second wife of Napoleon. At the height of Giuliani’s career, she bestowed on him the title of “chamber virtuoso”. His work was also highly respected and admired by Beethoven and Carl Maria von Weber. In 1819, Giuliani left Vienna for Venice and then Rome, apparently for personal and financial reasons. During his stay in Rome he developed a close friendship with the violin virtuoso Paganini and the composer Gioachino Rossini, with whom he regularly performed as a chamber musician. In 1823 he moved to Naples, where he died aged just 47 after a long illness. He was not able to fulfil his wish to return to Vienna. When in 1833 the world’s first guitar magazine was published, it was named in his honour “The Giulianiad or Guitarist’s magazine”.

The vocal works recorded on this recording testify to Giuliani’s preference for Italian songs. Especially in the Sei Ariette or “Little Arias”, a more modest form of the opera aria, the resemblance to the Italian bel canto aria is unmistakable. The selection presented here, published in 1818 in Vienna, is dedicated to the Empress Marie-Louise. The texts were all written by Pietro Metastasio, the undoubtedly most important opera librettist of his time.

In contrast to this, Giuliani’s Sechs Lieder, or “Six Songs”, with their German texts by Goethe, Schiller, Matthisson and others, are clearly more similar to Franz Schubert’s Lieder, or “Songs”. Giuliani also met Schubert during his time in Vienna. Published in 1817 in Vienna, these songs bear witness to the birth of the Viennese Biedermeier period, and have a great impact from a harmonic and melodic standpoint.

Finally, the Sei Cavatine consist of six Italian arias, in which Giuliani contrasts skilfully brilliant pieces with sensitive melancholic ones, and this in a clearly opera-like format. At times, in the style of Rossini, the guitar replaces a virtual orchestra. Whilst Giuliani prefers the extroverted Italian style for the voice, the guitar is mostly the supporting accompaniment, with chords played in arpeggio. The exception to this rule might perhaps be songs 3 and 5, where the highest level of virtuosity is demanded of the instrument. This collection of songs was first published in 1813 by Artaria in Vienna, simultaneously as a piano version. It is dedicated to Count Francesco de Pálffy, one of Giuliani’s student and benefactors, who often invited him to play as a soloist at his palace concerts in Vienna.


FELIX RIENTH, tenor
The Swiss tenor with Spanish mother performed at major festivals, like Ambronay, Paris, Ghent, Lisbon, Granada and recorded more than 20 CDs, to mention specially spanish baroque songs Tonos humanos by José Marín, considered as a "reference recording" by german magazine "Klassik heute". His Telemann- CD was elected among the „10 best CDs of the month“ by RITMO (Madrid), the magazine „CD compact“ (Barcelona) comparred Rienth to famous tenor Anthony Rolfe Johnson. Felix Rienth has sung as a soloist the grand oratorios all over Europe: Requiem by Mozart with the Mozarteum Orchestra in Salzburg, Masses by Schubert with the Suisse Romande Orchestra, Lobgesang by Mendelssohn at Kölner Philharmonie, Elias in Lisbon as well as St. John's Passion by Bach in Holland and Austria with the "Orchestra of the 18th century", conducted by Frans Brüggen. For VANITAS he published in 2019 the neapolitan baroque album „Ecco il momento“ with La Tempesta Basel, highly acclaimed by SCHERZO (Madrid) and AMERICAN RECORD GUIDE (USA).