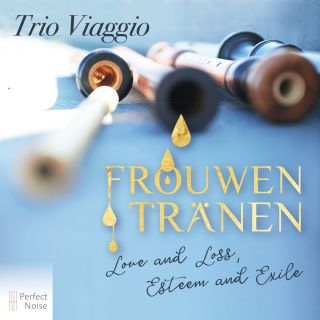 - A very unusual album about the Live & Loss, Esceem & Exile
- A pure expression of emotions through 20 different recorder flutes, played by three female musicians, building the Trio Viaggio
- A collection of musical tears for whatever emotional shape of the human beeings.

Musical tears in all their manycoloured facets are collected in this recording by Trio Viaggio.Of course tears are primarily associated with weeping, lamentation and melancholy, but their cultural history shows many more, often astonishing, aspects. Tears both symbolise emotions and are visible proof that the affect, or rhetorical emotion of a work of music, has been conveyed. They are unique in that they leave the body: through them, emotions emerge (albeit in liquid, and therefore ephemeral, form) and become visible to others.

In the Christian religion, tears of remorse were long considered to have healing properties; the tears of relics were laboriously collected and venerated. Pope Clemens VIII was once purportedly so overcome by spiritual fervour that multiple cardinals’ administrations were necessary to dry his cheeks.

According to an Indian legend, the Hindu god Krishna transformed the tears of a lovelorn princess into pearls. These and numerous other myths, legends and rituals surround the phenomenon of tears. The works on this recording portray tears of contented and painful love as well as those stemming from
religious adoration, euphoria and joy.

Trio Viaggio – three women playing more than twenty recorders take their listeners on a timetraveling
journey through the ages, from the Middle Ages and Renaissance through the Baroque era into the modern
world.

Their numerous appearances include concerts in Germany, Switzerland, Italy and Hungary, at the
Düsseldorfer Alstadtherbst, the annual meeting of the “projektgruppe neue musik bremen”, the Züricher
Biennale “Spotlights” of the European Recorder Player Society ERPS e.V., the yearly congress of the
European Recorder Teachers’ Association ERTA in Cologne, the “Musica insieme Panicale”, and for RAI Italy,
as well as radio productions with EnsembleWeserRenaissance and Ensemble Orlando di Lasso.

One of the most important aspects of their work is their continuing collaboration with living composers:
Samir OdehTamimi,
Joachim Heintz, Ezzat Nashashibi, Sascha Lino Lemke und Erwin KochRaphael
have all
written works for Trio Viaggio.

The ensemble won first prize at both the “Bremer Kammermusikwettbewerb” chamber music competition and
the “Young Artists competition at the Internationale Festwoche der Alten Musik Bad Wimpfen”. Their debut
CD is available from Coviello Classics.
www.trioviaggio.de