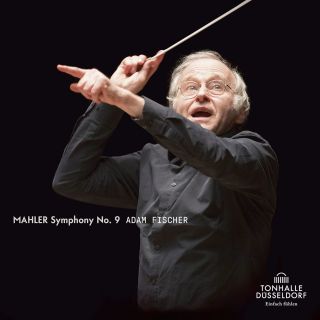 - The series of the complete Mahler Symphonies with the Düsseldorf Symphonic under the baton of Ádám Fischer gets completer with the release of the Symphony No. 9, only to be missed - No. 2 and No. 6 (will come in 2020/2021)
- Over the last two years Ádám Fischer’s Mahler recordings grew to a most successful recording project, winning the BBC Music Magazine Award, and the OPUS KLASSIK Trophy in Germany.
- The No. 9 is Mahler’s last Symphony. Many times he reused to write a No. 9, and when he stated, he wrote about „dying“ rather about his death. The Symphony format is framed by to very slow movements, each movement is a comparably very long

For all of his life, Gustav Mahler was afraid of death. After having finished his Eighth Symphony, it is well known that he preventively called his next orchestral work The Song of the Earth, afraid he might pass away, like Beethoven, Schubert, and Bruckner, after having composed a Ninth.

Later he indeed wrote his Ninth Symphony, which is about almost nothing else other than death – and death was already slumbering in his body in 1909. One could say that Mahler was so afraid of death that he summoned it.

To be precise, Mahler’s Ninth Symphony is not about death, but about dying. Death and dying are two entirely different matters. While working on the Ninth, I realized that I know of no other language apart from German in which the words “death” (Tod) and “dying” (Sterben) have entirely different etymologies.

Right at the start of this symphony we can already feel its seed, the onset of mortal illness. The subject has lost contact with the outside world. The three dramatic climaxes in the course of the first movement sound like three heart attacks. After each one of them, the anesthetist visits the ill patient with his syringe, and the surrounding world sinks into oblivion.

The subject travels to another dimension, and returns from it several times in the course of the movement. This is “only” illness, and “life” goes on a while longer.……….. (from the forword of the booklet by Adam Fischer)

At the beginning of the 2015/16 season, Adam Fischer was appointed Principal Conductor of the
Düsseldorfer Symphoniker and Artistic Consultant of the Düsseldorf Tonhalle. He is also Honorary
Conductor of the Austrian-Hungarian Haydn Orchestra, founder of the Eisenstadt Haydn Festival, and
founder and director of the Wagner Festival in Budapest. Well-known for his courageous political commitment,
Adam Fischer has spoken out often in favor of human rights.

Together with András Schiff he initiated
and signed a petition against racism and discrimination, which they submitted to the European Union.
Born in 1949 in Budapest, Adam Fischer studied composition and conducting in the Hungarian
capital, and with professor Hans Swarowsky in Vienna.

Fischer’s award-winning CD releases include the complete symphonic works of Haydn (distinguished
with the German national prize “Echo Klassik”) and Mozart as well as the symphonies of Beethoven.

He has also been awarded the Grand Prix du Disque twice: for his recordings of Die Königin von
Saba (Goldmark) and of Bluebeard’s Castle (Bartók). In 2017, Adam Fischer was named Honorary
Member of Vienna State Opera.

“An orchestra for Düsseldorf ”: that is the objective and the high standard that the Düsseldorfer
Symphoniker set for themselves – 250 times a year. This orchestra has an uncommon profile, since it
performs not only in the Tonhalle, but also for the Deutsche Oper am Rhein in Düsseldorf and in
Duisburg. On its regular tours to Holland, Austria, China and Japan, the orchestra carries Düsseldorf ’s
reputation as a city of culture out into the world.

Already in the 1700’s, internationally celebrated artists such as Handel and Corelli collaborated on
occasion with the “Düsseldorf Court Orchestra” until the court was dissolved. A century later, in
1818, orchestral culture was re-introduced into Düsseldorf when the Municipal Music Society
(Städtischer Musikverein) was founded, attracting celebrated musicians of the likes of Mendelssohn
and Schumann to serve as conductors.

The orchestra became truly “municipal” in 1864, and after
Aachen it is thus the second oldest civic orchestra in Germany. Throughout the following decades it
became one of the leading and largest orchestras in the country. Its conductors in the postwar era have
been Heinrich Hollreiser, Eugen Szenkar, Jean Martinon, Rafael Frühbeck de Burgos, Henryk Czyz,
Willem van Otterloo, Bernhard Klee, David Shallon, Salvador Mas Conde, John Fiore and Andrey
Boreyko.

Starting in the 2015 season, Adam Fischer has taken up the post of Principal Conductor.
The orchestra went on tour to Spain in 2011, guested at the Beethoven Easter Festival in Warsaw in
2012, and enjoyed resounding success in Moscow that same year.

In 2014, the Düsseldorfer Symphoniker
gave a superb début performance at the Musikverein in Vienna, and were likewise well-received at
the Concertgebouw in Amsterdam. In May 2015 they made nine acclaimed appearances in Tokyo.
In 2017 the orchestra was invited to open the new concert hall in Arnheim, guested in Moscow and
played again at the Concertgebouw in Amsterdam. 2018/19 the orchestra was guest in Budapest
and played a tour in Spain.